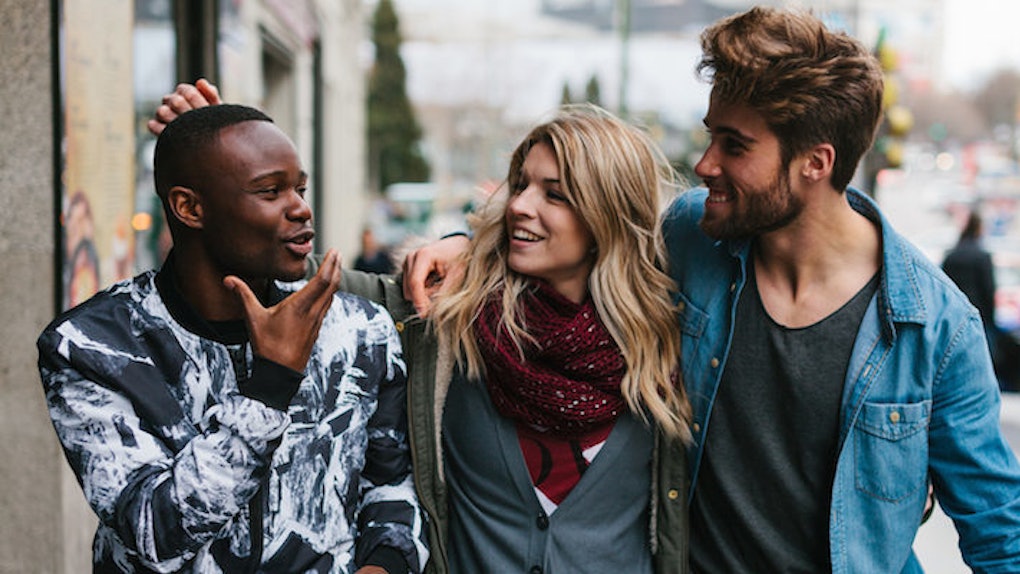 5 Questions People In Long-Term Relationships Are Sick Of Hearing

I don't know when it happened exactly, but at some point in time, society decided that long-term, serious relationships were totally overrated. It deemed it was much more appropriate to "play the field" and "date around." Every person is entitled to his or her own view on this subject. If you want to go on three first dates a year, great. If you want to go on 30, more power to you. (Imagine all of the free food you'll be scoring.) But as for me, I'll gladly stick to my one guy.

One of the most frequent questions I hear is, "Don't you feel like you'll be missing out if you stay with one guy for so long? Wouldn't life be so much more fun and exciting if you were single?"

To answer this question, I'm going to have to break things down for you. Do I feel like I'm missing out on something by being in a committed relationship with my best friend? Let's see.

Am I missing out on girl time?

In the past five nights, I have seen three of my best friends on two different occasions. I see my friends at school, at musical rehearsals, on weekends, you name it.

I spend time with my friends as often as physically possible because they're my people, too. I know there are certain things that are just for me and the girls, like getting a mani-pedi.

Sure, my loving boyfriend would probably go along for the ride and talk to me while my nails dried, but I'd rather not put him through that. Shopping is another one. I love when he comes to the mall with me, but it is a lot more interesting when I bring my girl group.

Do I constantly check my phone?

Since my boyfriend and I weren't in high school at the same time, I get asked this one a lot. To be honest, I do check my phone a lot. However, it's not necessarily to send my boyfriend some long paragraph laced with emojis and love poems. It's usually to check social media or online shop. (Whoops.)

If I had to guess, I would say I send my boyfriend an average of 10 to 12 texts a day on the days we don't see each other. It's not that we don't like talking to each other. We are both just busy people with more urgent things to do than send hearts back and forth for hours. I've always preferred face-to-face contact.

We don't get mad at each other when the other doesn't answer a text within a few minutes. As a matter of fact, we have recently established a rule where if one of us is out with friends or family, the texting conversation pauses until the other is done. I can't imagine a relationship where we have to force communication all day long.

Don't you get bored?

This is one of my favorite questions to answer. Do I get bored of being with the same guy for such a long period of time? It's a fair question. I've seen couples who have been together for a year who no longer look at each other during dinner. Instead, they just gaze down at their phones and scroll through their Twitter feeds.

Sometimes after months or years, couples tend to lose that interest and spark they once held at the beginning. It's a part of life. This isn't all couples, though. When my guy and I are out for dinner, we literally sit on the same side of the dinner table. I'm not exaggerating.

We sit that way so we can hold more intimate conversation without disturbing our fellow diners by laughing too loudly. There isn't a dull moment when I am with my boyfriend. He has brought some of the most exciting experiences into my life, including countless concerts, hiking, exploring neighboring states and eating some of the craziest foods I could've imagined.

There are some moments that aren't exactly movie magic, but we are never bored out of our minds when we're together. Whether we're front row at a concert or watching Netflix from my bedroom floor, we always make our own fun. I know many couples who are the same way. It's natural for the butterflies and fireworks to fade a little after being with someone for a while, but if both parties make a conscience effort, the fun never has to end.

What about flirting? Don't you miss flirting with boys?

Here's an answer that nobody is going to see coming: I don't miss flirting because I still do it.

I don't hit on other boys or try to pick them up. If I see a cute boy, I smile at him. If he strikes up a conversation, I carry it on. But, I make sure to clarify that I am in a serious relationship. I'm not in one of those relationships where both parties aren't allowed to acknowledge a good looking member of the opposite sex. Why? Because I think that's ridiculous.

If there is a beautiful girl sitting by my boyfriend and I at the food court, I'm usually the first to compliment her. If he agrees with me, I'm not going to jump down his throat. People are beautiful. We can acknowledge that without pursuing them. As a matter of fact, one of me and my boyfriend's favorite games is to talk about the hottest celebrities we know. It's harmless, and guess what? It doesn't lead to cheating.

In fact, I feel far less tempted to cheat knowing I'm allowed some free reign to smile at cute boys and dance with them at parties. Suffocating your significant other only makes them want to run more. I have friends who tell me about how they're not allowed to text any other boys, even if it's for homework help or just casual conversation. I don't think I could live that way. I trust my boyfriend, and he trusts me. Why stress out so much about little things?

Don't you feel like you should date more to know exactly what you want?

Finding a serious partner at a young age definitely has a few downsides. The biggest is that I'm constantly being told I need to try every flavor ice cream before deciding on one.

I've only dated five guys in my life (assuming we aren't counting those awkward junior high relationships), but I know this guy is different. He sings to me when I'm feeling down, and he makes me laugh when I feel like I could break down at any given second. He shows up at my house with fast food and magazines when I'm sick. He supports me, loves me and cherishes me.

I know what kind of guy I want, and guess what? I have him. I don't need to look around (and potentially get my heart broken again) just to find someone "better." Do you want to know why? Because I won't find better. I have a man who makes me the happiest woman alive. He understands my need for space and my passion for adventure. I could easily date a few more guys, but why would I want to when I have such a catch in my life already?

It's difficult being in a committed relationship nowadays. True friends support you, but there are always some negative people who will try to drag you down for choosing to date this way.

My grandma married her first husband at the age of 18, and it was considered normal back then. Now, I have no intentions of getting married any time soon, but I'm just saying it is possible to be young, in love and happy all at once.

The moral of this story is, everyone deserves a chance to love freely without facing hate from others. I support people who love to go on first dates, and I support people who find the love of their life at 16. Every single person on this planet gets to choose a way to love.