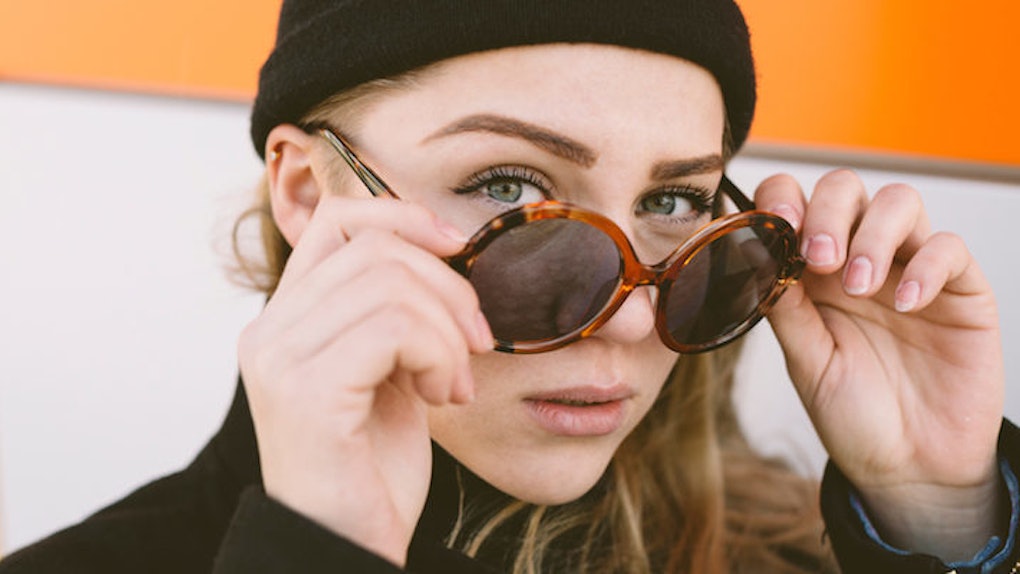 It was my sophomore year of college, and I was walking home with a boy I really, REALLY liked. He was older and therefore cooler than me, and I felt the need to be very nonchalant and cool in response.

On the way to his house, I saw a friend of ours from across the street. Feeling the need to prove that I was also friends with this guy, I started yelling, “JOEY!! JOEY!!” and running at our poor friend Joey like a total maniac.

While my crush waited across the street for me to finish talking to Joey, I started to wonder, How cool and hard-to-get would it be of me to just keep walking? Like, he’s totally expecting me to go crawling back across the street after this conversation with Joey because he thinks I’m obsessed with him, but if I just kept walking away from him, he’d be so into it. I’d be so mysterious, and it would create SUCH a chase. Needless to say, my grand plan did not work. Walking turned into awkward running, and he didn't chase after me like the men do in movies. He just kind of stood there, and we never talked about that again.

We all have stories like this. We've all tried so hard to play it cool that we've instead made things very, very awkward. It’s as much a coming-of-age moment as losing your virginity or going on your first date.

Don’t believe me? Just read these 13 confessions and see what I mean.

I didn't reciprocate oral sex because I thought that would make him want it more.

I let a guy I really liked go down on me without returning the favor, only to immediately leave after in the name of ~playing it cool~.

I didn't invite him to my date event, even though he was the only person I truly wanted there.

My sorority was having a "crush party," and I didn't invite the boy I was hooking up with so he wouldn't get an ego. He came anyway, and I made sure to let him know he wasn't on the list.

I slept with her roommate to make her jealous.

I once played it so cool that I f*cked her roommate.

I bragged about other options (that I didn't have).

I was trying to play it cool with a new hookup that I really, really, really liked. We had been drunkenly making out at the club all night. Shots had been taken (Zara and shots don't f*cking mix). She didn't pay attention to me for like five minutes, so I boldly walked up to her and said, "If you don't want to make out with me, I will find someone who DOES." Completely horrible and bitchy thing to say to someone who had been all over me the entire night. I was trying to prove to her that I had game, and all I did was come across like a crazy lesbian, psycho, bitch. Oops (but we did end up in a relationship for three years).

I made out with another guy in front of the guy I liked just to play it cool.

I encouraged him to date "the cute girl over there" when I really just wanted him to make a move on me.

I really liked this guy I was hooking up with sophomore year but was trying to play it cool, and I took it so far that I ended up on a couch with him at a Halloween party telling him how cute that girl was over in the kitchen and that he should hook up with her. I was so convincing too that he did -- and ended up dating her. Playing it cool: 1, Nina: 0.

I pretended to be f*ck buddies, but all I wanted was pillow talk.

[I do this] all the time. A trillion times. I defriend and re-friend my ex daily on social media. And send him nudes casually. And tell him we're f*cking, "because I need to get off," but really I just want to pillow-talk.

I pretended I was fine around his new girl. In reality, the thought of her made me want to throw up in tinfoil and eat it.

During my junior year of college, my ex's friend group was throwing a party. For the most part, I was good friends with people in this group, but there was one girl in the group who he'd hooked up with (and definitely had a crush on) right after we broke up, and I knew she would be at the party. Obviously, I hated the living F*CK out of this girl. But the other people I was friends with in the group kept insisting that she was really nice and I really shouldn't hate her because that's not fair and blah, blah, blah. So in an effort to seem "chill" about her, I decided to go to the party. LOL. Bad choice. I ended up crying in the corner to my underclassmen friends, cornering my ex several times asking to "talk" and storming out into the hallway to find him pinning her up against the wall and talking to her hand-leaning-on-the-wall-next-to-her-face style. You're probably asking why I even stayed long enough to witness any these things happening. Well, I couldn't just LEAVE. Everyone knew how I felt about this girl and my ex, so leaving would have been UN-CHILL, because the fact that I was bothered by it all would have become even more glaringly apparent. However, staying and pretending that my stomach WASN'T churning at the sight of her and my ex WAS VERY, VERY CHILL.

I showed up way too late for our date, even though I was walking on clouds about being asked out in the first place.

I was a freshman in college and IN LOVE with this guy. He invited me to a beer pong tournament. Obviously I didn't think it was because he was interested and wanted to hang out with me for the night. So I begged my friend to come with me but show up two hours late to "play it cool" like we obviously had better plans. So I show up at 12, when the tournament is winding down. We talk briefly, and he offers to walk me home -- still just friends. He's quiet on the walk, and then he says he'd waited for me all night, because I was his partner . I completely ruined a really fun date night so that he couldn't possibly think I was interested and [therefore] a "crazy girl."

I turned down a sober date, asked by a handwritten love letter of a guy I really liked just to play it cool.

I was a b*tch to the last person I'd want to hurt.

One time I decided I was being too open about my feelings. Like, I told my BF that I really liked him and sh*t. I said a bunch of smooshy stuff that I was completely embarrassed about. I was feeling very vulnerable and needed validation. So, when he told me he was too busy ~working~ to hang out with me the next night, I texted him and told him he was "quickly become irrelevant to me" right when he texted me. I thought I was showing him how awesome I was and thought he'd come right back and cry and be like, "I love you. Never leave me." But no. He was like, "WTF, that was so mean." And I had to say I was sorry. He still brings it up.

I was once at a party with a new guy who had just admitted he was into me. We made out that night, but I forgot we were supposed to be at all the same parties that weekend. On the next night, when we were alone, I got spooked when I realized he was really, really into me and that I wasn't ready to be with anyone. I ended up getting way too drunk, smoking all his cigarettes, being a stone-cold bitch and basically telling him I wasn't attracted to him (which wasn't true) in order to get him to back off. It was not my finest hour.