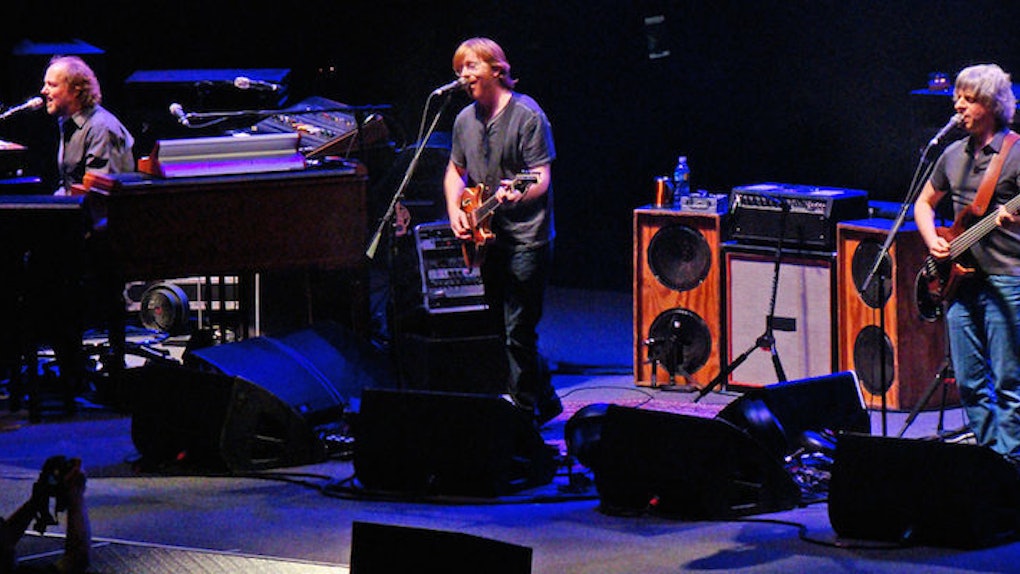 This past Saturday, I saw Phish perform.

Not in person, though.

The actual band was playing three nights at some lavish resort in Riviera Maya, Mexico -- any true "Phan’s" dream -- but I caught the concert at some bar around the block from my apartment that was streaming the webcast. I deemed it the next best thing to physically being at the concert.

And while those who actually made the trip to Mexico may have had an extra $2,000 -- and a week off work -- to spare, I don’t think they were any more loyal than the rest of us. Not even a little bit.

I mean, all of us in attendance spent our Saturday night packed into an overly-crowded dive bar solely to watching the concert on a projector screen -- if that’s not dedication, I don’t know what is.

But, hey, that’s the nature of being a fan of Phish: dedication. As I stood in the back of the bar, along with a bunch of other characters wearing Phish paraphernalia, I realized just how loyal most Phans are to their favorite band.

Just a week removed from seeing them play their New Year’s run at Madison Square Garden, I was back for more. To most people, it may appear to be an obsession -- and a weird one at that -- but any true Phish fan knows his or her love for the band is completely normal.

The complication of being a Phish fan, however, is that most people who aren’t fans of Phish simply won’t understand it.

Although we may appear to be a bunch of Birkenstock-wearing, kind-bud-smoking, no-job-having residuals of the Jerry Garcia era -- we’re actually a lot more normal than you think. At the end of the day, most Phish fans lead completely normal lives outside of the music.

Generally speaking, having a love for Phish isn't really different from having a love for skiing, or boating, or any other type of interest, for that matter. People just get the wrong idea about those who follow the band from Vermont.

So, for the purpose of this piece, I’d like to focus on why -- despite being a Phan -- we're still datable. In fact, I’ll explain why being a fan of Phish makes one even more datable.

If you're worried about not being attractive enough for your significant other, go to a Phish concert and look around. Trust me, you've got nothing to worry about.

2. We're not cheap with our money.

Phish fans are never stingy when it comes to the band they love. Phans understand that certain things in life cost money and won’t deprive themselves of joy because of a price tag.

Trust me, three- and- four-night runs can get kind of costly -- especially when you're spending 10 times the retail price to get GA tickets for each of the shows.

Like I mentioned earlier, Phish fans are some of the most dedicated supporters in all of music.

Whether they are trips to Mexico or three-day camping outings in Watkins Glen -- there is no length that true Phish fans won’t go to see their beloved band. I've seen a Phish fan miss the birth of his firstborn because of a Sunday show.

But you know what they say about never missing a Sunday show...

4. We have tons of physical stamina.

If you’re looking for physical stamina, look no further than your nearest Phish lover. Phish concerts can last for hours -- many hours, like when they rung in the new Millennium -- and you can bet that true Phans will be up and dancing the whole night long.

6. We pay close attention to detail.

If you're worried about your significant other failing to notice something about you, date a fan of Phish. Whether it's teasing a certain melody in a jam -- or jamming out to one of their lesser played songs -- hardcore Phans will make note of every little thing the band does (even when they're over-analyzing).

If you're worried about your significant other forgetting your anniversary -- or your birthday, for that matter -- ask any Phish fan how many shows he or she has been to....and where...and what the setlist was.

That should put any of your worries to bed.

There's no such thing as a "casual" Phish fan. You either don't really listen to the band -- or you f*cking love them.

There's something about the band that inspires fans to completely submerge themselves in the music and tradition, right from that very first concert.