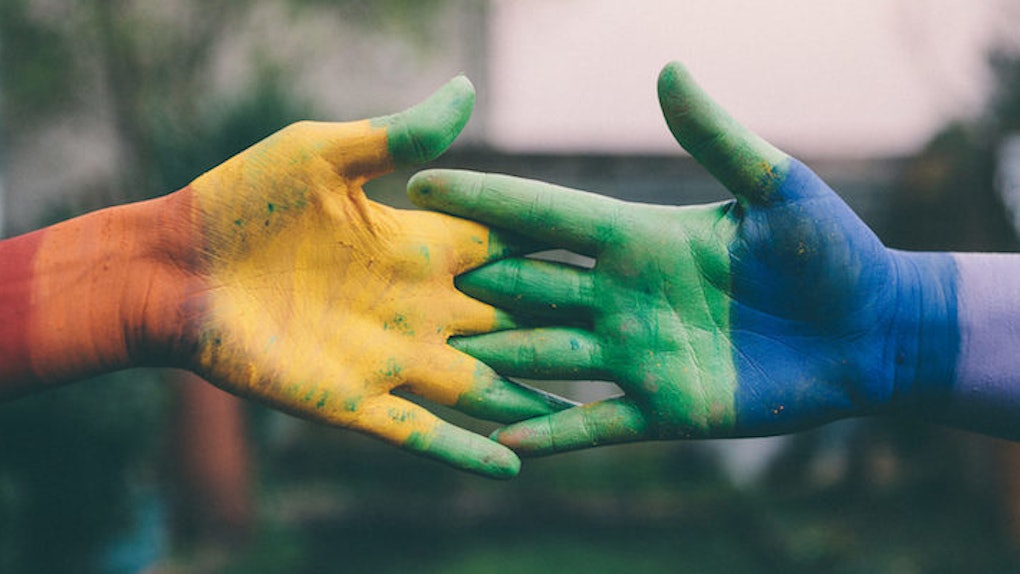 You Being Uncomfortable With Gay PDA Isn't My Problem

I attended my first ever Gay Pride at the age of 32 this year. I found myself surrounded by enough rainbow flags, glitter and sparkle to cause a migraine.

But for the most part, it was a fun experience and I'm glad I went. What was truly eyeopening was the amount of public displays of affection I witnessed. Boyfriends were holding hands, girlfriends were kissing. It all seemed so, well, "normal."

It certainly bedazzled the eyes of my date I attended the event with. He was 25 years old, and had only recently come out of the closet. To say he was like a deer caught in headlights would truly be an understatement.

The sight of beaded drag queens, leather-bound daddies and hot pants-wearing queens would be enough to shock anyone. And when you're a timid, unassuming virgin like he was, I can see why it would be a slight shock to the system.

What was refreshing for my date was how open and free he felt. We walked up and down the streets of London that day looking like a couple in love who had been together for years, when in reality, this was our second date.

We cuddled; we hugged; he had his arms around me; we kissed. It felt truly amazing just to feel like a regular couple.

No one batted an eyelid as we walked hand-in-hand beside the colorful floats, no one took double looks at the sight of two men in an embrace and there was no "batty man" or "faggots" remarks from tracksuit-wearing chavs in sight.

This was something he had never experienced, and even though he did feel nervous and awkward, he was wrapping his arm around me with comfort and ease.

I am comfortable with public displays of affection, so this was nothing new. But for my date, this was a pretty big deal.

He had found himself in a whole new situation. But even though I have no issue kissing a boyfriend or date along the Southbank on any other day, I find myself only feeling comfortable pursuing public displays of affection in the "cosmopolitan" parts of London.

Boyfriends were holding hands, girlfriends were kissing. It all seemed so, well, 'normal.'

You would never catch me skipping down the road with my boyfriend in tow in Seven Sisters or Wood Green, often seen as deprived "ghettos" and the lower end in terms of class and nobility.

I am a born and bred Londoner. And I have found that our city contains a lot of prejudice from people who have either moved to London from predominantly homophobic, backward countries or young council estate-ridden people who are totally ignorant to queer lives.

It seems to be a lack of education, being born into a certain lower-end "class" or a both of those factors that seem to be causing the issue.

However, why should I let the bigoted views of other people define me and my actions? Why should I limit myself to the confines of the "gay friendly" parts of London like Soho, just to be affectionate with a man and feel somewhat "normal?"

Why am I conforming to a social standard just so not to "offend" those who lack knowledge and understanding? A hug is a hug, get over it.

This turns out to be much easier said than done, unfortunately.

I don't want to be a spectacle for everyone around us. I just want to blend in, to hold hands along the street and not have such an awkward peck when I try to kiss my boyfriend goodbye on the train platform.

With previous partners, showing or receiving affection in public has always been an issue. Most have been reluctant to hold hands, never mind kiss or do anything that would identify us as a couple.

This was primarily because they were scared of being abused – verbally or physically – on the street.

We're forced to play the role of "friend" in restaurants or parks, while I look on in despair and envy of the countless "straight" couples like a whirlwind all around me, looking besotted in their significant others arms, while I can barely share the same table as my partner without paranoia and fear.

I and my Gay Pride date are no longer dating, but before we split up, he actually told me of how uncomfortable he felt at pride. He often heard homophobic slurs from onlookers as we simply held hands on the tube home.

Why should I let the bigoted views of other people define me and my actions?

Even during Gay Pride, we were made to feel inferior. The fact that the sight of two men simply holding hands could even garner any sort of reaction is beyond me.

Hopefully, the next guy I meet won't have the same issues attached to public displays of affection as my previous partners.

I will not allow the prejudice of society to limit my affection in public to my boyfriend. There's a reason why there is a "boy" before the "friend."

He is my boyfriend, and I will hold his god damn hand whether you like it or not.

There's a reason why there is a 'boy' before the 'friend.'