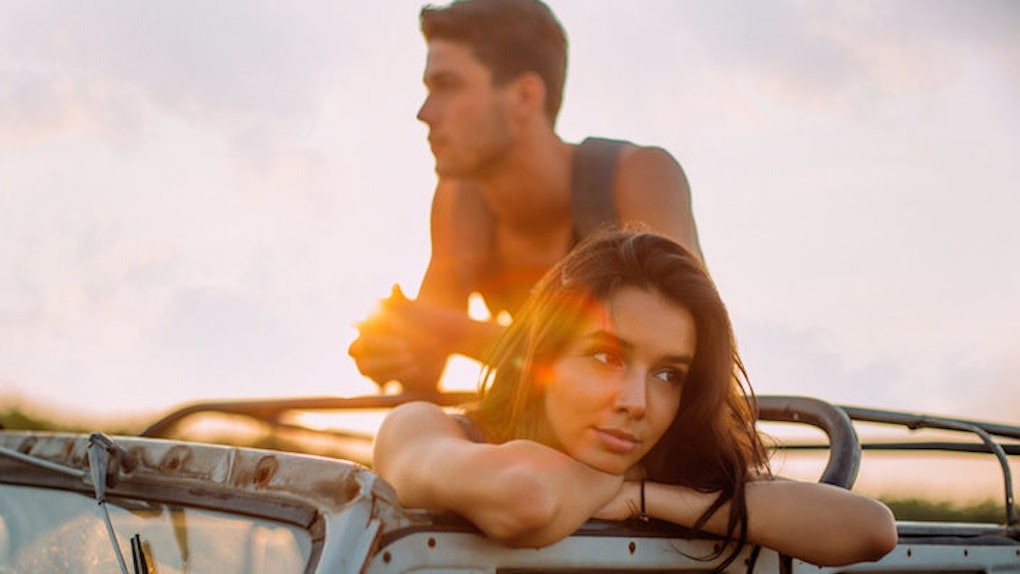 The stress of dating exclusively is something we all know better than we’d like to confess: wondering if we’re justly dividing our time between our new beau and our best friends, the agonizing headaches, the drama that ensues as we try to navigate the minefield of healthy and proper communication.

And yet, it seems like we’ve found the solution to all the blunders and hair-pulling anxiety in that department: open relationships.

They're all the rage. And why shouldn’t they be? What is there to not like about them? You can date whoever you want and not get into any trouble over it. You don’t have to lie to anyone about what it is you are or are not doing.

And let’s face it: A variety of sex is unfailingly exciting when you get to experience it with anyone you desire.

Everything is casual. And casual dating can feel low-pressure and relaxing, especially because you can focus on yourself or work or school -- things that should be the object of your devotion and dedication anyway.

When a guy with a boyfriend asked me out on a date, I was undoubtedly skeptical. I used to tell myself all the time that I could never be involved in the destruction of someone else’s romantic life.

Not only is it messy and disrespectful, but dating someone like that is also guaranteed to have the same thing happen to you. Players love the game too much to quit, and a pawn isn’t exactly my favorite position on the board.

It wasn’t until he brought to my attention that he was in an open relationship, did my tune change drastically.

So, tossing aside all feelings of doubt and questioning, I threw myself headfirst into a situation I only wish I was able to anticipate in a "That’s So Raven"-esque premonition. Unfortunately, we often blind ourselves to a clear reality that doesn’t even take a psychic to foresee.

For a while, I thought things were going well. I thought this guy was cool and he seemed to want to keep me around.

He wasn’t afraid to show it through cheesy, romantic gestures that even had my friends swooning. Surprise outings in the city at one in the morning, movies screened in empty classrooms at school and eating at some of the best restaurants for dinner were just some of them.

Why was it that I still felt sh*tty about myself? Nothing was going wrong and he wasn’t awful or discourteous to me. At least, I thought he wasn’t. And since I wasn’t able to immediately identify the issue, it led me to believe I was the problem.

Open relationships leave a lot to be desired. You’re sacrificing many of the bonuses that come with being exclusive.

Instead of the typical issue of competing for time with your friends and boyfriend, you’re fighting to spend time with him over the other guy he’s lying in bed with. And for once, your jealousy cannot be attributed to paranoia because there really is someone else in the picture.

What if his actual boyfriend is more attractive than I am? What if his boyfriend doesn’t even know I exist? Am I unknowingly helping someone cheat? Why don’t I get a label? I mean, other than side piece.

Does this mean I’m undeserving of the boyfriend title? What if he has a better body? I probably don’t even kiss as well as his boyfriend does. Why is he still hanging out with me?

These are the inevitable questions that will run through your head. At first, you may have liked the low pressure and the convenience of being able to float through the dating scene without any labels.

But then, you realize the pressure has been turned up: It’s on your self-worth. You’re a good person. What did you do to deserve hearing him talk about his actual boyfriend for an hour while you awkwardly sit there, smiling and nodding?

What did you do to deserve getting texts about how he’d much rather be spending time with you right now because he’s pissed at his actual boyfriend? Don't you want to spend time with me because, I don't know, you would just like to? Not because you're temporarily on bad terms with your boyfriend?

Oh, right. You told him and yourself that you were okay with being involved in this messy situation. And now you get to deal with the repercussions of all the damage you've done to your self-esteem because, all of a sudden you think, maybe, this is as good as you’re going to get.

After all, boys aren’t exactly lined up to ask you out on dates. And so, you stick around.

I mean, if he's willing to spend time with you while he has a boyfriend, he must really like you. When he says sweet things like, "You're the best," you might even smile for a minute before realizing he's probably saying the same thing to someone else.

But you want to believe in him so badly, you convince yourself this is all for you.

Things will get better, right? They always do. It's simply a matter of getting over being possessive. You agreed to share his attention with someone else, so you have to play the game fairly and do just that.

It's all state of mind, after all. You've just got to clean out and refile the cabinet in your mind that has what you thought you knew about relationships in there.

There's just one glaring problem: The "open" part of the open relationship seems to be lacking. There was never any conversation about what's okay and what isn't, or whether or not you were even okay with the idea of an open relationship.

I guess I didn't want to find a way out. That meant being alone again. So I convinced myself that with time, the two of us could make things work in the way they're supposed to.

You're lucky a guy even wants you hanging around, right? And you're afraid to be open about your feelings because maybe he'll see all the emotional baggage you come with. Maybe if you ignore the fact that all your friends are saying he's bad for you, it'll get better.

But more importantly, maybe with time, you’ll learn you can do better. You don’t have to subject yourself to self-loathing and pain just because you think this is as good as it gets.

Guess what? It isn’t.

And any guy who really likes you wouldn’t inflict you with so much torture. We’ve been raised to believe that love comes with suffering and struggle, but the real thing shouldn’t be like that.

In any kind of relationship -- open or not -- communication is everything. If you're afraid to be honest about your feelings, it's not worth it. It's that simple.

When you really like someone, the fear of healthy communication isn't there because you know they'll try to understand. And you know they would hate to think they were inflicting damage to your self-esteem.

In the words of Pink: "You're just like a pill; instead of making me better, you keep making me ill."

This is something that’s hard to realize: Cutting ties with someone you feel so attached to is far from easy. We have a fear of letting go of people, especially when we think we’re happy with them.

But you can’t truly know what happiness is until you put yourself first.

It took me longer than I’d like to admit to reach that point where I knew my self-worth was suffering. I always prided myself on my high self-esteem. But you’ve got to swallow that pride and do what’s best for you, not what's best for the person who’s making you so miserable.

Cutting someone out of your life won’t go over easy. It’ll probably be the exact opposite.

No one wants to admit they may be a contributing factor with regard to your low self-worth. Chances are, you’re going to lose someone you thought you could possibly still be friends with. And for a while, you’ll still feel like sh*t.

You get to go out with your friends whenever you want; you can feel confident in the fact that, someday, you’ll make someone incredibly happy, and you get to focus on yourself and on your growth as an individual.

I’m not saying all open relationships operate in this tumultuous manner, but it certainly takes special people to make it work. I’m simply not one of them. And I’m much more satisfied knowing that now.

Open relationships may be the hip thing for young people, but I’d like to hang on to being single until I meet someone who’s really ready to commit.

And my self-worth thanks me for allowing it to prosper until then.