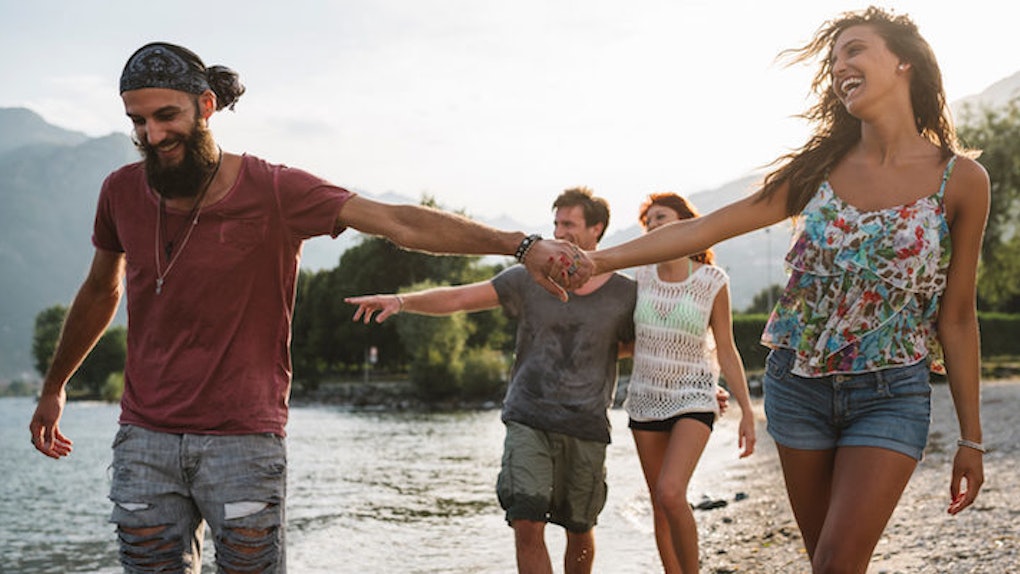 Cling Fling: I'm Not 'Obsessed' With You, I'm Just Following Your Lead

I have a friend. A week ago she met a guy. They hit it off. They went into that three-day sleepover time warp we’ve all been caught up in at least once.

You know, you meet someone, and under extenuating circumstances, you end up never leaving each other’s side. You’re pretend dating -- holding hands, acting like you’ve known each other a year.

You think this is it. This must be the guy for me. He’s clearly so obsessed -- he wants to start dating right now. He’s basically living at my apartment. Is it too soon to start looking for a place together?

By the fourth night, you come home from work, and he’s texting you to hang out again. You’re pretty tired and have enough common sense to know you’re entering that dangerous territory of not finding his jokes funny anymore or his penis as round, but because you’re so accustomed to never turning down a date, you agree.

He must sense something you don’t. He must just want to John Lennon/Yoko Ono this. You agree to another sleepover.

The next day, you sense something is up. He isn’t texting you as much. You’re somewhat relieved not to have to come up with witty texts all day in reply, but you’re also nervous. What does this mean?

Did you make a mistake hanging out again? Should you not have said yes to that fourth sleepover?

Of course you shouldn’t have! But how is this your fault? You’re not the one who asked for it? You weren’t the one texting him wake-up smiley emoji and lunchtime stories about coworkers.

You were just following his lead.

You were tired of him before he was tired of you, but you didn’t hold it against him! You didn’t think he was clingy when he asked to spoon. You didn’t think it was weird when he wanted to stay in your apartment all day. You didn’t judge him for texting you first three times in a row!

But it doesn’t matter. Men aren’t rational when it comes to dating. They also aren’t complying with the same social graces as women. They do whatever they want, whenever they want, and when they’re done with it, there’s no over-analyzing.

On the fourth night, they aren’t thinking about your kids’ names or when you’ll meet his parents -- he’s not thinking at all. He’s following his dick, and for the past four days, it’s been nice getting it wet.

Suddenly, he’s tired of you and doesn’t know why. He’s labeling you as clingy and overattached and decides to back off.

Unfortunately, he’ll never realize he was the clingy, obsessive and totally ridiculous one. He’ll forget he asked for all those dates. He started all those chats, and he wanted it first.

So for all my fellow friends out there who have been dropped by a man you weren’t really that into in the first place or felt clingy and wrong for agreeing to dates, you’re not crazy or deluded. I know you were just following his lead.

I’m not asking you out; I’m just agreeing when you ask

Since when did it become our duty to have to play coy and unavailable? We played the game until we got the date, and now we have to turn down the date?

Why does it always fall on our shoulders? Shouldn’t the man have enough game to wait?

I'm not blowing up your phone; I'm just responding to your calls

Since when did it become obsessive to answer someone’s obsessive texts? I’m pretty sure it was him texting "good morning" and "good night."

You weren’t judging him for over-texting you or holding it against him when he sent one too many winky faces, but here we are. He’s the one refusing to answer your texts now.

Looks like high school really doesn’t end -- you can get screwed just being there.

Even if you aren’t the one making plans, executing the dates and arranging morning texts, you were still involved. You let it happen and didn’t do anything. You are guilty by association. You didn’t bring the booze, but you damn well drank it.

Men, like your parents, don’t care about the details. All they care about is how they feel about it, and right now, they’re just not feeling you.

You had no motive, but you were at the scene of the crime, and the real criminal just fled. So here you are, alone, in the middle of a mess. You didn’t want to date him, but apparently, not turning him down means you may as well have tried to marry him.

Next time you'll be rude and un-engaging and won't respond to any invitations. God forbid you look like you're interested for even a second.