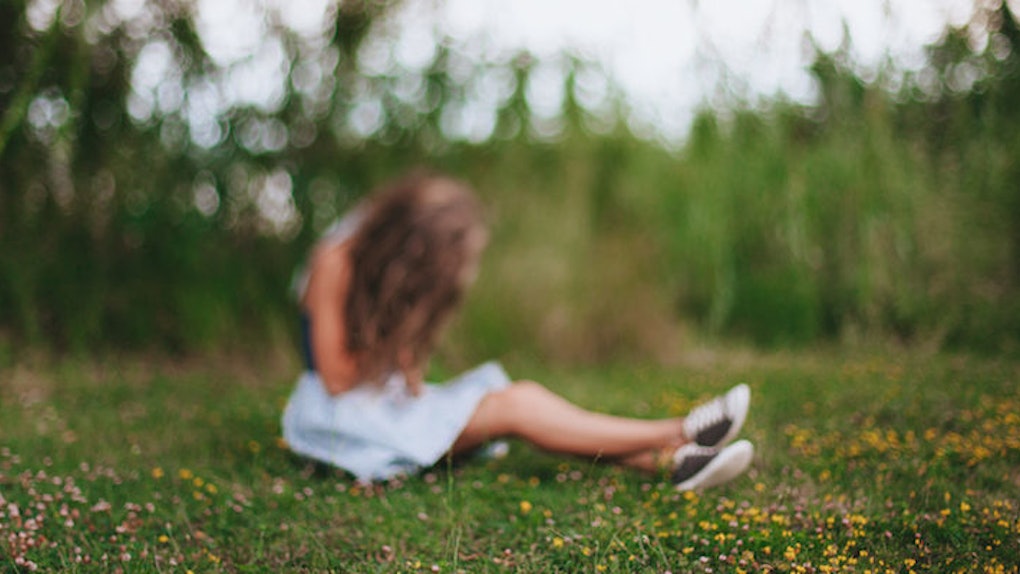 It was just the other day listening to Victoria's* story on the roof of a Manhattan high-rise that I realized something I'd rather not have realized. I've never been in love.

"I'm moving to Colorado," Victoria said, smoking her cigarette and looking out at the skyline.

"For a boy!" Mallory interjected.

"No, not for a boy," Victoria quickly corrected. "With a boy."

There was no job offer, no family trouble, no pressing reason pulling her away from New York -- she just wanted to "find herself" elsewhere. And her boyfriend wanted to find himself too. With her.

I smiled and looked down. "Huh. I've never had that," I thought to myself. "Someone who cares for me like that for whom I cared for just as much."

And then it hit me. I don't think I've ever been in love.

But haven't I? Hadn't I fallen in love with a guy I ran back and forth to for three years? And hadn't he loved me because he'd do the same?

No, I haven't been in love. Sure, life has handed me guys who loved me. Life has also handed me guys that I grew to love. I've had guys who would've done anything to move somewhere with me and then there were also guys I'd have done anything to move somewhere with. But none of those guys were ever one and the same. Someone always fell way harder than the other. In my life, "mutual feelings" were just never a thing.

I haven't been in love. I've been in lust. I've mistaken intense periods of longing for something real. Sex, good sex, kept me going and for a while, it was enough. But then it was taken away and I felt stripped. I missed being pinched and touched and embraced. I've watched my body give up on me and shut down because it hurt so much to no longer be touched. I've felt empty and I've called it "love."

I've been co-dependent. I kept man after man around just so that I wouldn't have to sit with myself. I've spent Saturdays in, lying naked with men who didn't really understand me, just for the sake of having someone to hear me, even if he couldn't listen. I've watched those men up and leave after getting from me what they needed and I've watched my once-welcoming heart grow more and more lonely as it grew more and more disappointed.

Love to Victoria means moving across the country with someone. That's what love means to most. I've never gotten anywhere close to that. Love, to me, was spending two whole days with someone, then not hearing from him for two weeks. Love was two confused-as-hell souls finding comfort in each other's confusion.

This September, I'll turn 26. It's an unnerving feeling to know that I will enter my 26th year on this earth having never been in real, romantic love. I suppose the scariest part about the years that've passed is that each time I lusted and lost, I genuinely did believe there was love there.

And maybe that's why it's hard for me to be happy for Victoria. Because it is hard. Watching everyone else make finding love look so easy and putting on a smile when deep down, a little piece of you just dies inside each time someone else has found love, until you're the only one left standing with no one to call her own and so many pieces of you have died from being happy for everyone else so many times that you just feel cold and hollow.

"Why do you take it so personally?" my therapist once asked me.

"When a friend of yours tells you she thinks she's in love -- why do you find it offensive?"

"How could I not take it personally?" I barked back. And how could I not? What has Victoria had all along that I haven't had? What upbringing, what formulaic steps, what twist of fate did she experience to end up where she is now? What should I be doing to end up there, too?

And what can I do but feel a little less hopeful when a girl four years younger than me tells me she's wildly in love? I can practically see the ring that's not yet there on her finger. It's taunting me. It sparkles and whispers things behind my back and dances a funny "You can't have this!" dance. It tells me the clock is ticking and I'm living life wrong.

I guess it's my own fault I've never been in love. I'm a dreamer. I'm the girl who cried "love." I'm the girl who wants love so badly she'll sabotage any real chance of it because the real-life version of love couldn't possibly be as good as her daydream.

I am so in love with love that I've kept myself from falling in love. I want it so much that I can't see true love when it's standing right in front of me. Hell, I've probably let it pass me by more than once. Have you ever wanted something so much that you're afraid to actually find it?

I want to run mindlessly into a field and watch a man fight through the fog just to find me, "Pride and Prejudice" style.

OK, fine. I want the modern-day equivalent of all that -- a guy I bumped knuckles with over some half-and-half at Starbucks comes chasing me down the block and asks me out while holding open the elevator door of my work building until I finally say "yes." He lets go, we become mad for each other and the rest is history.

I only want love if it happens the way I've always imagined. And I suppose that's why I've never been in love.