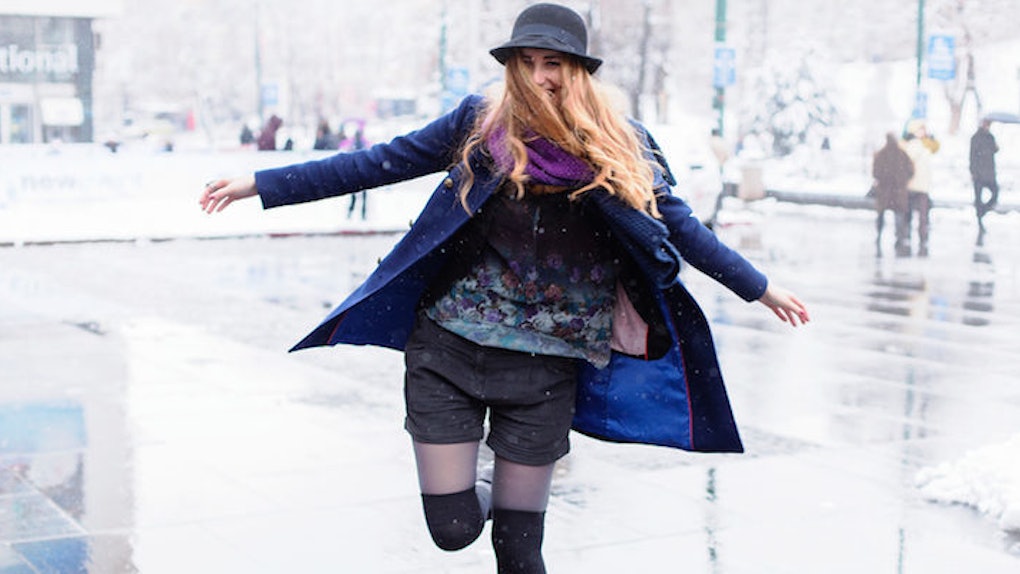 Four years ago today, I began dating someone I was positive I would marry. But we ended it.

Immediately after the breakup, I believed I would never move on -- even though I knew he was bad for me. I thought I was destined to be miserable for the rest of my life.

But as time passed, my three favorite words went from "I love you" to "I'm over him."

“I’m over him” was not just music to my ears. It became the soundtrack to my life.

I struggled so intensely after my breakup. I barely ate for two weeks. I didn't want to get out of bed. I put the "hopeless" in "hopeless romantic" (Yes, I realize this is usually said about someone falling in love).

I believed if I punished myself enough, he would come back. A little cloud followed me wherever I went, and I was drowning in the downpour. After what felt like an eternity, I realized I needed to calm the storm.

I started doing this by regaining my old habits and my old self -- my true self. The torrential rain became a drizzle. Pre-relationship Jessica rose from the dead.

I started choosing laughter over tears and friends over solitude. My breaking point became my restart button. And along the way, I learned to accept my flaws.

I gained peace from knowing I'd given all of myself to save my relationship. I tried and tried, and I let go knowing I'd done everything possible.

And the rain stopped, but not before it taught me the value of being fluid. I became flexible, my sadness evaporated, and -- finally -- my old spark rekindled. It hadn't been snuffed out after all.

I became a stronger, wiser person. My new fire taught me passion, hardened my skin and reheated my goals. Instead of allowing myself to go up in smoke, I became a volcano. Self-worth and happiness rose out of the embers and gave me a new glow.

I had to relearn some basic lessons, and the first was how to be myself. I live my life with a flame inside my heart. That is what keeps me company.

I take care of myself.

I've learned to self-soothe. I no longer need anyone to help me through a difficult situation.

If I'm having a crying fit, I know how to calm myself down. I don't need someone else to pacify me. I am my own comfort, and that is a beautiful thing.

I make sure to pamper myself. I groom; I pluck my eyebrows. I cook -- or I buy mac 'n' cheese. More extremely, I hop on a flight to Argentina by myself. I'm busy making sure I am well-nourished and happy.

I live for myself.

I used to let my ex judge my smallest decisions. He made me feel bad about myself whenever I drank, so I stopped drinking. I considered myself from his perspective instead of my own.

I stopped going out and having fun with my friends; I stopped being a 23-year-old. But this was so stupid! I was supposed to be living MY life -- not his.

At least I can make up for lost time now. I've re-dedicated my life to myself. I don't rely on anyone else to sustain me.

I'm young, and if I want to go out and drink until I can't remember my name, that's totally fine. If I want to dance until sunlight touches my skin -- or stumble back to my bed after work and watch "Pocahontas" with a box of pizza at four in the morning -- that's also fine.

The colors of the wind don't judge my decisions -- even if they are reckless. And neither should anyone else. I'm single, and I can do what I want.

I give myself permission to be young and stupid. I believe our silly, drunken memories can be just as important as the serious ones.

It's important to have fun and let loose -- one day, we won't be able to do this. Our livers won't function as well, and our bodies will be weighed down by responsibility and age.

As long as I'm honoring myself and not hurting anyone, why should I let someone make me feel ashamed about enjoying my youth?

I'm not dependent on my phone.

I don't need validation from anyone. The old me would wait by my phone like Pavlov's dog expecting a (verbal) treat.

The buzz of a phone -- or its silence -- no longer chains me. I don’t need someone texting me to tell me how pretty or fun I am; I already know this.

Also, I’ll take a direct deposit alert over a goodnight text any day.

Single me is ready to take life by the horns. I’m done wallowing and crawling. I'm ready to run in every direction. Every day is an adventure, and I never know where I’ll wind up or what I’ll try next.

I've become so impulsive that I keep a toothbrush and extra shirt in my bag. I love free-falling. And no matter where I land, I’m confident it’ll be better than being stuck by the wrong person’s side.

And when the time is right, I'll find someone to fly with me -- not glue down my wings.

I stimulate my mind.

Brain stimulation is my new orgasm. I'm expanding my interests and honing my skills. Sure, sex is fun, but skills are necessary. And thankfully, pain is the best ingredient for creativity.

Ask any artist. Even though I won’t cut off my ear, I’ll squeeze my internal wounds. I'll make them bleed until I'm dry, and I'll give that pain over to my work.

I’ll improve myself intellectually and empirically because an active mind has no time for negative thoughts.

The old me wanted to be settled down by the age of 24. Now I don’t want to meet the right person until I've accomplished all of my personal and career goals.

I no longer want a ring on my finger; I want stamps on my passport. I want to move instead of marry. I want excitement. I want the kind of real, pure, unadulterated excitement that only I can give myself.

I want to dog sled. I want to touch the pyramids of Giza. I want to wake up with bright eyes and fall asleep under the Northern Lights. I want to make my heart beat out of my chest before I even think about giving it to someone else.