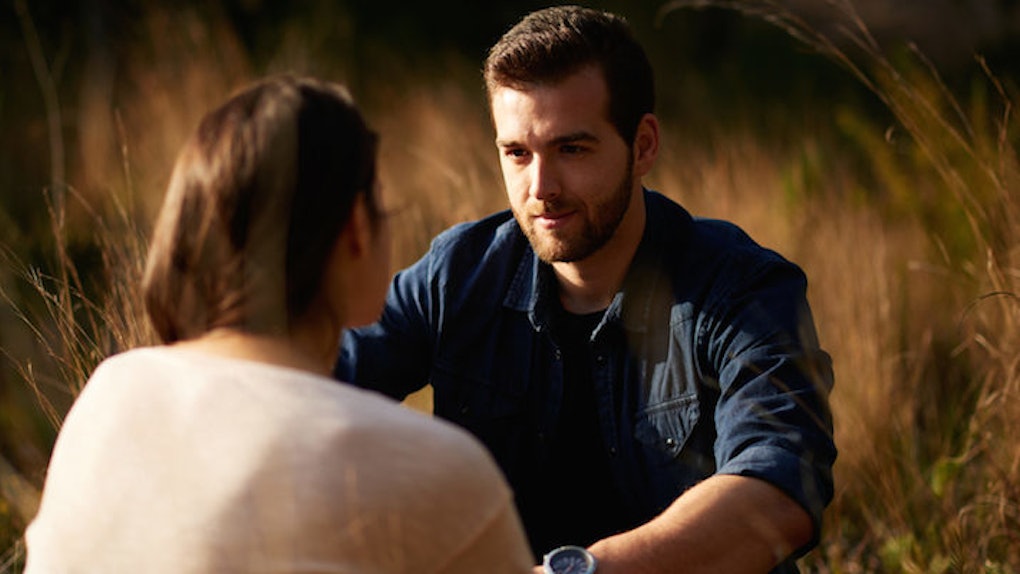 “I feel like I can tell you anything,” he said, leaning back on the couch across from mine in a hotel lobby in Maryland.

I shrugged and said, “You probably can.”

And then he did.

He told me about a relative of his who had passed away and about something he’d done in his teenage years and was ashamed of.

Then he told me about some of his favorite things, and I realized, without much surprise or reaction, he wasn’t telling me just anything.

He was telling me all of the things that truly mattered to him.

In this case, he was drunk. He was probably a little high, too, but it doesn’t always go that way.

Sometimes I’ll meet a guy for dinner for the first time, under the influence of nothing but dim lighting and the excitement of meeting someone new, and next thing I know, he’s offering up the details of his wildest dreams.

The setting always changes, and so does the person.

But his instant openness with me, regardless of who he is, is something I experience time and time again.

Three weeks after meeting the man in the hotel lobby, I lay in bed, knowing I would probably never see his face again.

He was really sweet, and his stories spoke to me. He was also really good-looking.

The fact we stayed up talking until 5 in the morning somehow means nothing.

It will lead to nothing.

I started to wonder why I hadn’t just stopped him right then and there and said, “No, you can’t tell me anything,” or “I don’t want to know your secrets because I’ll remember every word, and by tomorrow, you either won’t remember or just won’t care.”

But I didn’t say that. I never do.

I don’t know what it is about me that invites people to open up.

Maybe it’s something warm in my eyes, or the simple fact I keep my mouth closed a lot more often than I keep it open.

Maybe it’s my refusal to partake in physical one-night stands that somehow leaves me susceptible to intellectual ones.

Whatever the reason, almost every man I meet instantly recognizes me as the listener he’s been searching for, and he starts to bare himself emotionally.

It may sound like a refreshing change from meeting guys who keep things inside and try to act like robots, but each heart-to-heart leaves me with the same burning question: What am I to do with all these glimpses of souls?

Whether I talk to someone for an hour or every day for a year, these conversations affect me, and I hate that they don’t seem to affect my future at all in the long run.

I get to see firsthand there really is good in everyone because even the biggest of jerks who have crossed my path have allowed me to see the kindness within their hearts.

For some reason, men get vulnerable with me, but then they put their guard back up or allow their carnal desires or fears to take over and ruin it.

It leaves me either walking away or watching them walk away, with this beautiful piece of them in my hands and nowhere in my life to place it.

What use is it now that I’ve met so many people and none of our deep conversations have kept us from ultimately parting ways?

Sometimes I wish I could take pieces from every Mr. Wrong and put them together to create someone I belong with.

If I could take the hands I held regularly for over two years, a pair of forearms which unexpectedly brushed up against mine on a cool night in Savannah and a set of elbows I glanced at once as the sleeves were rolled up over coffee, then maybe together they could form a full set of arms to hold me.

Maybe I could tear them from the ghosts they belong to and give them life again.

They could keep the space around me from feeling so big.

Hell, why stop at the arms?

I could take the charisma from my college boyfriend, along with his blue eyes.

Then, I could add in the artistic flair of the free-spirited painter I went on a total of seven dates with.

I could pull the smile from the guy I had one deep, drunken conversation with while standing at a bar, and you know what?

Bar guy had really great hair, too. Let’s keep that as well.

I definitely want the heart of my most recent ex-boyfriend (preferably the way it was before I mistakenly broke it into pieces).

I want the adventurous side of the adrenaline-junkie who called me up on Christmas Eve just to tell me he’d never love me.

I want the chivalry of that man in my office building who once rushed ahead of me so I didn’t have to open the door for myself.

But who am I kidding?

I’m no Dr. Frankenstein, and the magical powers of love are starting to become something even I struggle to believe in.

So what am I to do with all the pieces of men I’ve collected over the years?

Furthermore, what are those men doing with the pieces of me that I’ve left exposed?

Some of the ones I spent more time with will reach out once in a while, offering up an inside joke or an article they know I’ll love.

But what about the guy who talked me through my father’s first cancer treatment, whom I haven’t spoken to since 2009?

Or what about the one I cried to for an hour after getting my first job and realizing adult life was nowhere near as fun as I’d imagined it to be?

Do we just take pieces of each other and continue on, acting as if they mean nothing?

Call me cynical, but it makes getting to know someone seem like an utter waste of time.

Lying awake at night while the hotel guy sleeps soundly hundreds of miles away makes me wonder if I should just forget everything I’ve learned about the men in my past.

Should I forget they ever existed, the way they’ve seemingly forgotten me?

But the more I think about giving up this knowledge, the more I realize there’s a part of me that wants to keep it.

That part of me believes even though it is important to move on, we all can, and should, take these memories with us as we go.

Maybe we don’t forget the people who weren’t right for us.

Maybe we don’t even try to; we just accept them for who they are and keep them in our hearts, even if we’ll never actually use our hearts to love them.

I need someone to know the premise of my dream novel, and it’s okay if the one person who knows isn’t someone I talk to on a regular basis, or even at all.

Just as that same person needed me to get through the darkest time in his life, he doesn’t need me anymore.

But maybe some nights, he just needs to know there’s someone out there who understands his past.

He knows someone who watched him go through it, and it reminds him he actually did make it through.

On those nights, he can think of me.

When I started writing this, I was feeling used by this whole situation.

I felt as if guys dumped their worries, wants and skeletons onto me just to get some sort of mental relief, and then they moved on without so much as a look back.

After taking some time to think about it, though, I don’t regret a single emotional moment I’ve shared with anyone of the opposite sex.

I don’t regret looking into the windows they opened and liking what I saw.

Regardless of how random or small, for a moment, I let those people feel trust.

I helped them through a tough memory or time, even if it lasted for just a few seconds.

Sometimes, seconds can be unbearable.

I’m learning now that not every conversation I have has to lead to a relationship, a friendship or even an acquaintanceship.

Not every guy who holds my hand or looks into my eyes will fall in love with me, and that’s okay.

These are all the little details, but they are not the big picture.

I’ve been mistaking the two for far too long.

No matter how big or small, all of these things I received from other people have now become part of me.

They’ve affected who I am.

Last spring, I sat in a businessman’s apartment as he told me about his troubled relationship with his father, with the Arctic Monkeys playing in the background.

That man will never be a big part of my life, and he doesn’t deserve to be.

But, he needed to tell someone about his father, and I discovered some new music that led me to other awesome experiences because of him.

If I look at it that way, I’m a lot less bitter about the way he chose to abruptly disappear from my life without so much as a goodbye.

Similarly, the one person who truly broke my heart and made me feel the most is not the person I’m meant to be with.

As long as it took me to figure out what all the time we spent together and all the pain was for, I finally did.

Now, because of him and that experience, I know I can get through anything.

I’m no longer terrified of being left, disliked or not being someone else’s “the one” because it’s already happened, and now I know I can survive it.

I would never have found that out if we hadn’t become so close and shared so much before he left.

The painter taught me to look at the world a little differently.

The drunken hotel guy got me thinking about all of these conversations and helped me draw these conclusions.

The guy at the bar convinced me my brown eyes really can be just as pretty as the other woman’s blue ones.

The next time a man tells me his secrets, I won’t just shrug and wonder what they’re good for.

I’ll accept my role as his confidant and take them in with pride.

And when we go our separate ways, I’ll always remember him by the stories he told.

I guess little moments or pieces of our souls aren’t such bad things to be remembered by.

After all, as a writer, haven’t I spent my whole life hoping to be known for such things?