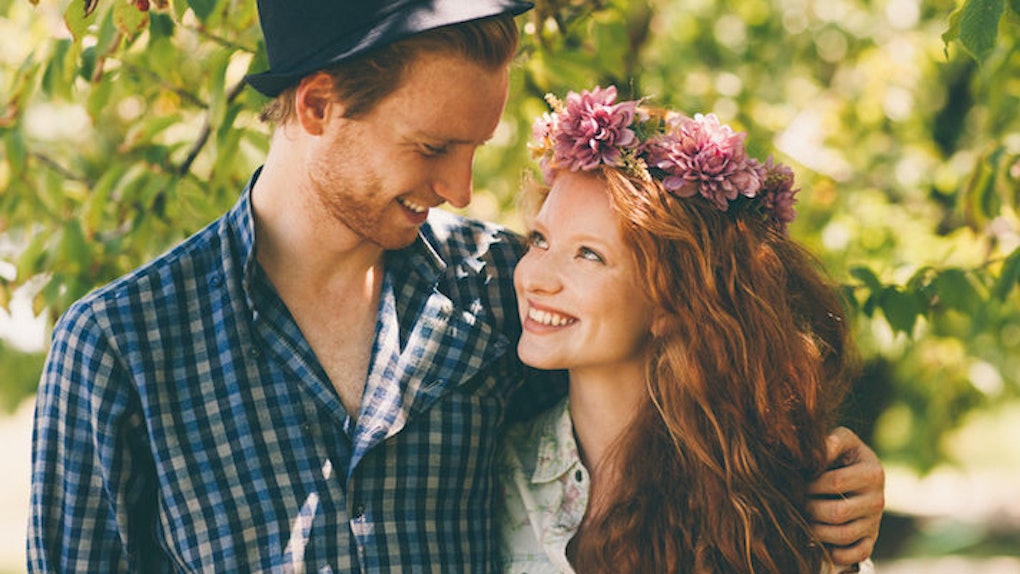 In any relationship, it's hard to know when exactly to say "I love you."

How do you know when your butterflies and lust turn to real, true love? Is there a single moment that'll mark that transition?

Or will it just be the accumulation of laughs, date nights and orgasms that make you slowly realize you prefer this person never leave you alone, ever, and that's what we've come to see as love?

Everyone's definition of love is different. Even more so, the love we feel in each relationship is different, too.

The greatest challenge of humanity is to nail down what, exactly, love feels like.

So, I set out to find out. Here are 24 people on one word they would use to describe falling in love, and how they felt the moment they knew they were in love.

We were on the train heading to his parent's house for the day, and I was INCREDIBLY hungover. Like "almost ran off the train several times thinking I was about to puke" hungover. But we kept making stupid faces at each other for the entire trip to help me feel better, and I just knew. It was really early on in the relationship, so I was definitely nervous/apprehensive about it, but the feeling just kept getting stronger and stronger.

When I realized that if I had to die at a moments notice I'd be okay. I was so full of love. I couldn't imagine being any happier. He was my everything. As long as he was beside me, I would be okay.

There wasn't an exact moment... it was a feeling that bloomed over time. And as cliché as it sounds, when I was not by his side, I literally felt part of me was missing.

It was the moment she made me laugh. We'd been together for a few months. I took her out to dinner in Long Island City, and I was surprised. Now I always found her funny, but that night felt like an epiphany. It was the realization that she was someone I genuinely loved to be around.

The moment I knew I was in love was when I didn't want her to leave to go home. I wanted her to stay and not go home, and I couldn't wait to see her the next morning. I wanted to spend more time together and talk more and more.

I can’t remember the moment I first knew I was in love (maybe it wasn’t truly love?), but I do remember very vividly the moments I first realized I might be capable of loving someone again after my first love. I was in the robotics club in college, and I officially met Daniel* our sophomore year on the day he joined the team. I was immediately drawn to him. I thought he was so cute, but the first time I caught his eye, it left me feeling vulnerable and exposed like he could see right through me, so I forced myself to push those thoughts aside and tried to act cool and disinterested. Several months later, we were driving to a tournament, in the middle of January. We were sitting alone in the back of the team van, and it was FREEZING. When I mentioned how cold I was, he put his arm around me, and I was so disarmed that I could barely breathe. It was a simple gesture, but so tender. It’s difficult to explain, but I knew he had shown me, in those fleeting moments, a side of himself he rarely, if ever, exposes -- and such a contrast with his normal arrogance. For a second time, I forced myself to forget about it because I thought he was in love with someone else, and to be honest, I was too scared to take a chance. The third time it hit me, I realized I was too scared to NOT take a chance. Unfortunately, the third time it hit me, it was when our mutual friend, and even more unfortunately, our mutual teammate, kissed me. I actually liked and admired the teammate a lot, but when he kissed me, it hit me like a ton of bricks that I may have blown any chance I had with Daniel*. Ultimately, this story didn’t result in love, because when I finally took that chance with Daniel*, though he initially was so excited that he couldn’t even believe it and repeated for about an hour “I can’t believe this is happening” with shining eyes, he later pulled back and told me he didn’t want to hurt our teammate. I’ll never know if he was scared or just not that interested, but in a way, it doesn’t matter because the experience empowered me to be myself and express how I felt in my interactions in the years to come. I knew I didn’t want to make the same mistake again, and that mentality has brought much happiness to my life since.

I was sitting in my boyfriend's car when I was 17, and I told him all about my past and the questionable decisions I've made and wasn't particularly proud of. I expected him to cut things off right there, but he looked me in the eyes and said whatever I had done made me into the person I was now (then), and he was happy that we made it to where we were.

We were looking into each other's eyes (literally just staring), and it wasn't creepy. I opened my mouth to say "I love you" for the first time, but he said it first, like he knew exactly where my mind was.

I'm a very independent person, but the moment I knew I was really in love was when I kind of had a panic attack thinking about my boyfriend not being in my life anymore. It was the moment I realized I truly was completely vulnerable to another person. It was terrifying and exciting all at the same time.

My current boyfriend (at the time just a friend) was in my night class and would stay late occasionally to help me edit videos. One night we stayed until close, so he offered to drive me home. I remember him obviously driving a long way home. Normally I would find this creepy, but the fact that I'd rather stay in the car longer with him made me realize I was really drawn to him. He asked if I wanted to get food but the only place open was McDonalds. To make me laugh, he pretend drank his fries, and I remember being smitten that he was even that comfortable to be himself around me.

When the thought of my boyfriend being with somebody else caused a drunken meltdown. When I see him, and he does the most unique and cute gestures.

Toward the end of my freshman year in college. We were lying together naked and our hearts were beating at the exact same time.

FIREWORKS. No, but just an intense desire to be close to a person, so close that you're basically fighting to be inside him (non-sexually). You want to shake him. It makes you angry, and you moderate between the extremes of euphoria and blind anger because you just want to be holding him the entire time.

Actually, when we were both dating and did not want to commit to anything yet. She kissed someone else, and it was actually the pain that made me realized how much I was already in love.

I knew I was in love when I started realizing that even my boyfriend's most annoying habits and worst qualities didn't bother me. Sure, I always ensure my relationships have a "ying-yang" quality with which we balance one another out and make each other better people, but even those qualities he had that drove me absolutely insane didn't bother me. It was eye-opening for me. I've truly never loved someone so purely for both his strengths and his flaws.

Just looking at him made me smile. I wanted to be with him all the time. He helped me get through a really rough time in my life, and I realized that he really was my best friend. It just hit me.

The moment when I kind of knew it was when I injured my knee. She stayed at my house, slept next to me every night that first week to make sure I had everything I needed.

I knew I was in love the first time he introduced me to his friends. I was worried he would act differently toward me in front of his friends, but he didn't. He was still outwardly loving and caring, and it was really sweet to see.

I knew I was in love for the first time when I lost all awareness and internal fear of what others thought of me. Having my first boyfriend made me care less about coming out and helped me be ok with who I was. I suddenly was overcome with pride and, in a way, wanted to show off my queerness. I didn't care what any one thought of me because all that mattered in that moment was my man and me!

I remember being away for a weekend. I couldn't stop thinking about him, and I was just filled with an overwhelming urge to tell him I loved him. I guess he must have felt it to because when I got back after the weekend away, it was one of the first things he told me. And just knowing we were so in sync like that confirmed that it wasn't just infatuation, but it was real.

I was crying, shaking, alone and desperate. A stranger opened up to me, told me she would protect me, and that she'd always be there.

I came to the realization after I've been saying it in my head for some time. I couldn't imagine anything more beautiful than him: body, soul, everything.