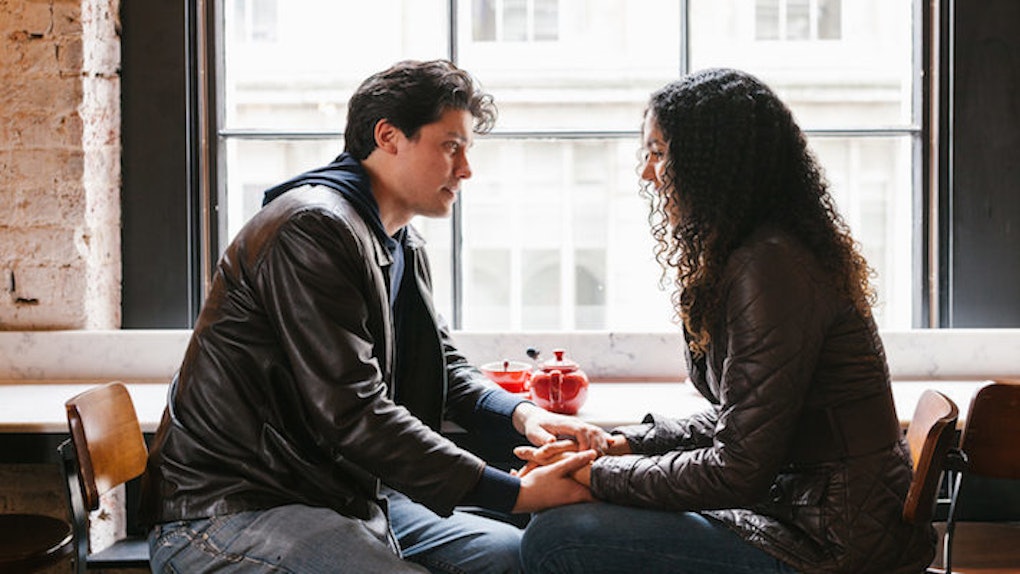 Lies Are Easier Than The Truth: Why Men Say Things They Don't Mean

There are many crucial firsts in a girl’s life.

We talk about a lot of them. We talk about what it's like to get your first period, to lose your virginity, to find a partner. But we never talk about the one thing that will actually be of any use.

It's something that girls have to figure out on their own -- usually next to tissues, usually on their phones.

It’s an epiphany. It's a moment more important, severe and life-changing than period blood or a diamond ring. It’s a first that will alter the course of their relationships with men for the rest of their lives.

Whether at 14 or 32, every woman comes face-to-face with the shocking fact: Men say things they don’t mean. Then and there, her life will change forever.

What do I mean when I say that men say things they don’t mean? I mean that they lie. They lie the way women never would. They lie for fun, for sport and always for a f*ck.

If you haven’t experienced this crucial moment yourself, think of your friends. They might have said "I don't get it" or "But he told me he loved me."

This moment happens when your friend wonders why this man said he loved her two days ago and now isn't answering her texts.

It's the moment a man told her that she was the most beautiful girl he'd ever seen -- then whispered this to someone else two hours later.

For people who have experienced it, gotten through it and come out the wiser, the only question remaining is why.

Why did he do this? Why did he deceive and cheat someone who didn't even know she was in a game? Why do men think it's okay to say whatever shit comes to their minds -- and make like it's our problem for believing it?

Most importantly: Why are we the idiots for having been fooled?

Because they’d rather hide behind a lie than face the truth.

Rather than face up to the truth, admit they just wanted a quick f*ck or were lonely and needed someone to hold them, they’ll spout whatever they think you want to hear.

Then they'll play dumb when you question them later. They’d rather pretend they have no idea what you’re talking about than talk about something real.

They think it’s easier to get away with a lie then try to be honest. They think that if they say things they don’t mean, the whole thing is void. They think that words, like their actions, cancel out in the morning.

Because they don’t think ahead; they just think of the now.

Even if we’re having a one-night stand, we know what we’re doing and what we want to get out of it. We plan things, look ahead and always think of the consequences.

They think with their dicks, and dicks have very short attention spans. Men don’t care how it plays out; they just want to get in the game.

Because they don’t want to put the real work in.

Men may play stupid, but they know a thing or two about women. At least, they know what we want to hear.

They know that telling a woman that you love her is a way easier way to get her into bed than proving it with honest actions and real dates.

They know that pretending to put your heart on your sleeve is easier than rolling it up and putting in the work.

They know that telling a woman a lie will lead to some sort of action. They know they can leave before the reality and long-term consequences set in. They don’t care about your tears when they’ve already gotten their orgasm.

Because they’ve reversed the rules.

Instead of feeling bad for lying, they make us feel bad for believing them. As with so many double standards (especially sexist ones), men aren’t accused for being pricks, but women are shamed for falling for their lies.

It’s our fault for believing men. It's our fault that we pick out the good and ignore the bad.

We’re the dumb ones for believing and for falling for the lie. Like a hunter's prey, we’re the ones stupid enough to get caught.

Because they’ve never faced the result of their actions.

Until a man’s been deceived and lied to by women (which does happen), he will never truly understand how wrong it is to lie to someone and then pretend that the recipient of the lie is crazy.