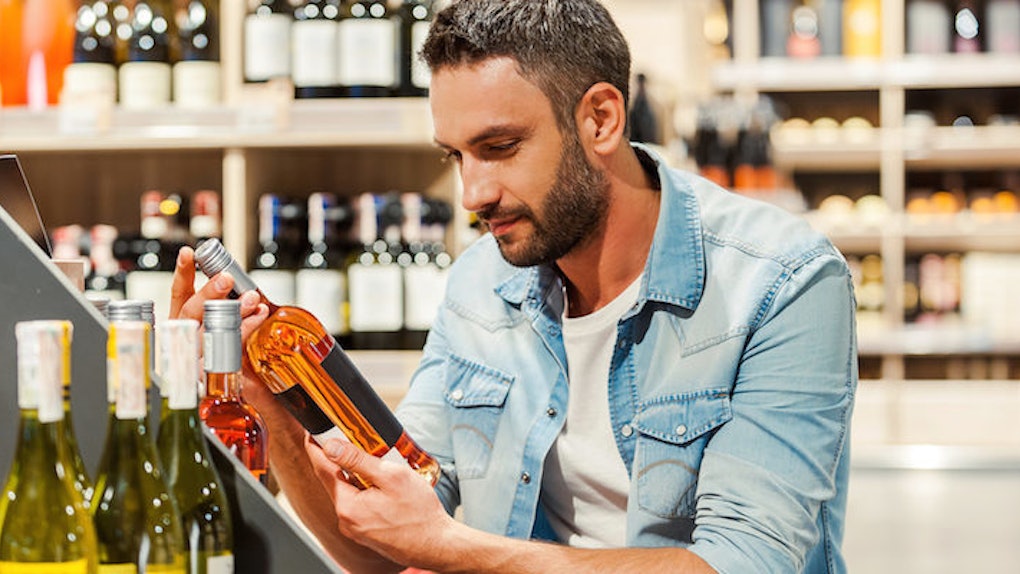 Buzzed On Boys: 5 Types Of Wine And The Men They Represent

I've drunk enough wine to tranquilize an elephant, and that’s just this year.

I’ve also dated enough guys to typecast them before they have a chance to strut across the bar and give me a breathy, beer-smelling, "Hello."

As a self-described wino and date-a-holic, it’s amazing how many similarities there are between the wines we guzzle with our girlfriends and the guys we’ve dated whom we gossip about while drinking said wine.

Now, grab a glass while I spill:

Tasting notes: buttery, smooth and full of himself

Like most alcoholic beverages that are socially appropriate to start drinking during the afternoon, you’ve encountered a chardonnay of a man during the daylight hours, which makes him all the more dangerous.

The two of you start off having a pleasant enough time together. You think you have a pretty good connection with him.

He comes in attractive packaging with his sweater, Top-Siders, tan skin and Colgate smile.

Being with him makes you feel warm, relaxed and smiley before happy hour has even officially started.

Like a bottle of chardonnay (because that first glass disappears too quickly), you’re probably enjoying this golden charmer of a man on a boat, on a patio or at an ambiguously religious holiday party with your family that you’re too old to be sober at.

But like any good chardonnay worth its alcohol percentage, this guy sneaks up on you when your defenses are down and your buzz is kicking.

He’ll suddenly say something snarky, ghost on you or start kissing your cousin.

Just like that, your infatuation with chardonnay is over.

I suggest sticking with the lighter, sharper, easier-to-read stuff, like a snappy sauvignon blanc.

Tasting notes: hipster, hails from Oregon (or dresses like he is), light-bodied, goes well with food but lacking any major substance

This flannel-and-beanie-wearing skinny guy with holes in his shoes is the type every woman thinks she likes. But in reality, only a few people seriously like pinot noir (the wine and the guy).

In a glass, pinot noir is notoriously inconsistent.

Some are smooth and dry, while others are a bit sharp. Still, others can taste a little fruity.

The pinot noir is the wine you drink when you don’t know what else to buy.

This is much like the guy you date in your early 20s when you’re going through your weird, post-college phase and want to date someone your parents won’t like.

The most notable trait of a pinot noir guy is how unmemorable he is.

There’s not even enough of an alcohol percentage in him to get you sufficiently buzzed and feeling good.

Drinking pinot noir is the equivalent of dating someone just for the sake of being in a relationship. You’re going through the motions and drinking the wine, but you’re not getting anything substantial from it.

All you feel is slightly tired all the time, and a bit chubby from all the extra calories.

Dump the PN now, and learn how to like a punchier wine.

Merlot is the bad boy of wine.

Like the wine, merlot men can be very different depending on where they’re from. But the one thing they all have in common is the fact they look good.

They look so good, and you don’t even know you’re about to get punched in the face with the worst hangover ever.

A merlot man plays the part of being a good friend, a sweet man and someone you could really see yourself liking for a good, long while.

He’s tall, he smells good and he always wears a button-up. You feel damn sexy drinking him in.

But, you only meet him at night, and it’s hard to keep track of him because he just keeps slipping through your fingers.

He’s just mysterious enough about where he’s been and what he’s been doing that he keeps you interested.

But, you’re starting to feel uneasy.

A merlot can be so dry and so sharp, it feels like getting drop-kicked after the first gulp.

Others look good, feel good and taste really good for the first glass.

But that second glass in, you realize you’re way too drunk. You really need to eat a cracker, or else you’re going to puke.

Like bad boys, merlots start out amazing, sexy and delicious.

But, they always bite you in the ass, unless you sip slowly and ask for a lot of food.

If you binge on a bottle of merlot, there’s absolutely no way you can wake up without a hangover.

Suggestion: Enjoy this sexy sip for only one glass. Then, run for the vineyards.

Tasting notes: approachable, medium-bodied, sweeter, fits in well for any situation, but is a cheap buzz that leaves you feeling like sh*t in the morning

In real life, a RTW could be anything, really.

It’s a blend of whatever juice is leftover after all the really good stuff has been made into its own wine.

It’s inconsistent in its flavors, it can range in quality and price (so you’re never really sure what you’re getting) and it always leaves you feeling like sh*t after two glasses.

If a guy's a red table wine, he would be that friend you’ve had since college who keeps waiting for you to be the one to man up and make a move.

He’s the one you trust and like, but you’ve never been attracted to him.

Well, like an RTW, he sneaks up on you over time until you accidentally get drunk and sleep with him.

It seemed like a really good idea last night because you two were giggling and laughing from all that sugar. You just felt so happy.

But, sweetness can be a bad thing when you wake up with a raging hangover and the horrible regret that comes from sleeping with the guy who definitely should have stayed in the friend zone.

My advice? Give the wine (and him) away as a gift to someone you don’t like very much.

I don’t care where it’s from, how expensive it is or what kind of label it has; it’s the wine everyone likes.

Bring it to a party, and it will be well-received.

Drink it on the couch in your sweatpants with pizza, and you will feel satisfied and buzzed.

Grab a bottle for dinner, and sip it while enjoying the subtle hints of spiciness, complicated layers of flavors and overwhelmingly good taste of berries.

Drinking cab sauv is like dating a guy who wears cashmere sweaters with well-fitting jeans.

If cab sauv was a man, he’d be the guy you can bring home to meet your parents without feeling embarrassed.

You can rest easy, knowing he’ll arrive in an attractive package with a twist of creativity in his appearance.

He’s the man next to you on the couch, killing the pizza and watching "Bridesmaids" with you, even though he’d rather be watching football.

He’s the wine you can introduce to your notoriously picky girlfriends.

After just a little time with him, they’ll all be glassy-eyed and laughing as they wink at you about how great he is.

He’s the every situation, "always good no matter what" type of wine because he’s the type of guy all of us want to find.

Once you find that perfect bottle and ideal price point, you’ll keep buying it for life.