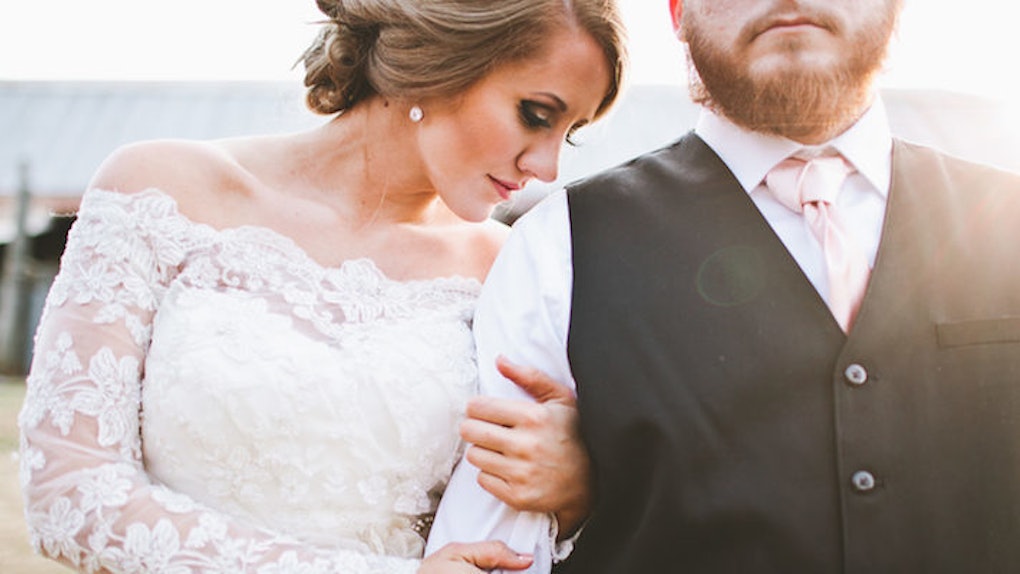 Why People Who Marry Their High School Sweethearts Are Insane

Hey there! I’m 28 years old. Turns out, that’s just another way of saying that all of my friends are getting married. I’m here stressing over what Netflix show I should binge next, and they’re out there committing to other people for the rest of their lives.

I must have missed the memo, because I am not prepared for that at all.

But they are, and that’s awesome. I’m sure they’ll live happy lives with their spouses.

Unless they met said spouse in high school. Those people are more baffling to me than a Kanye rant. You’re trying to say you found the love of your life at an age when your other major priorities were acing the SATs and planning an epic senior prank?

How does that happen? Aren’t your families legally required to throw you an intervention now? Did you read “Romeo and Juliet” and think it was a realistic guide to planning your love life?

The entire idea seems crazier to me than voting Trump. Here’s why:

(Disclaimer: I fully accept that some people actually are mature enough and lucky enough to find true love as a teenager. Hey, I was a “Boy Meets World” fan, too. In all honesty, if you’re happily married to your high school sweetheart, you’ve done the right thing. Whatever you read below, please don’t be mad at me, OK?)

You haven't even met anyone.

Anyone who’s had the displeasure of being in an adolescent relationship knows it usually ends in heartbreak, followed by months (sometimes even years) of listening to embarrassingly sad music and pining over your ex.

Teens are prone to obsessing over the first person with whom they share any sort of deeper “connection,” even if that connection consists primarily of physical attraction and a shared opinion of which emoji is the coolest. You can spend all of high school trying to win back someone you spent one month dating back in ninth grade.

But then, something magical happens. You graduate. And pretty quickly, you forget about your crush.

It’s not just because you’re starting to grow up. Now, free to make your own choices, you go on to college. Or you start a career. Or you travel the world. No matter what choice you make, though, the result is often the same: You meet other people.

Even in an age of social media, being in high school involves living in a bubble. You barely know anyone outside of your town. Of course you fall for the first person you meet who, like, “just gets you.” The idea that there could be an utterly absurd amount of people out there who also get you seems pretty unrealistic when you’re still writing bad poetry about angst, and torment, and your stupid teachers.

How can you find your soulmate when you’ve met almost none of the other awesome people out there in the world? That prom date you’re “in love” with? You’ll find about two dozen similarly cool and beautiful people at your college summer orientation.

Again, I know there are exceptions. That’s just hard to imagine when you also consider the fact that, well…

Hey, no judgment. I was a teenager once. And as a so-called "adult," I’m still pretty dumb. I put a pair of boxer shorts on backwards the other day and didn’t realize it until I was getting ready for bed. I don’t claim to be Alex Trebek over here.

But that’s just absent-minded stupidity. Teenage stupidity is something else entirely. It’s what happens when hormones, immaturity and pointless anger drive most of your decision-making. If stages of life were musical groups, adolescence would be Limp Bizkit.

Hopefully I’m not offending anyone. I’m not talking about intellect here, or creativity, or even wisdom. Teenagers can be geniuses, they can be artists, they can even be more insightful than people three times their age.

But when it comes to emotional intelligence, adolescents are pretty ridiculous. It’s not their fault. Puberty gives you the kind of uncontrollable urges that would impress The Hulk, society still refuses to see you as a real person, and every single adult you know insists that the decisions you make now will determine the course of the rest of your life.

Yeah, it becomes pretty easy to start making the kind of irrational choices that will make you cringe years later. Ending friendships over a misunderstood text message. Telling your parents you hate them because they confiscated your Xbox. Listening to Limp Bizkit.

(Kids who don’t get the reference, please do yourselves a favor by not Googling that.)

In the midst of all this turmoil, when the vast majority of emotional decisions you make will eventually mortify adult you, how is it possible to find the person who completes you?

Hell, I would be terrified to marry anyone I met during high school. Those people actually saw what I was like as a teenager! They know all the worst things there are to know about me.

When I meet an interesting girl now, I treat my teenage years the way Don Draper treated his past. We don’t speak of that time. You can’t know anything about that. I will start to legitimately panic if the topic comes up.

There are people who feel comfortable spending a lifetime with someone who knows all those dark secrets?

Was nothing or no one else interesting to you?

Then you go to college, and switch majors three times while applying to 10 different grad school programs. You enter the workforce and decide you need a “career change” six months into your first job. You move to a city, then decide you’re more of a country person, then decide the country terrifies you enough to make you move back to a city.

That’s natural. That should happen at this stage in life. It just shows you’re engaging with the world and opening yourself up to new possibilities instead of closing yourself in and rejecting opportunities for growth. It doesn't make you indecisive; it makes you curious.

And through all those changes, you never met someone who was a better fit for you than the one you started dating because you were dance partners in your drama club’s performance of “Footloose”?

Adolescence is a time of major, awful, embarrassing change. But your 20s are also a time of significant change. Just, you know, less awkward change. You’ll start to truly discover your strengths, find your real confidence and develop your passions.

I suppose it’s possible you can meet someone in high school who changes right along with you, following a path close enough to your own that neither of you ever see another worthy option. Wherever life takes you, it takes you there together, preserving that one thing you did right during those years, that one decision that doesn’t seem foolish and immature in retrospect.

And you know what? That’s kind of beautiful. Good for you.

But holy sh*t it does not change the fact that to an outsider, that idea is absolutely ridiculous. You enjoy your marriage. I’ll be here rejecting the invitation I just got to my 10-year reunion.