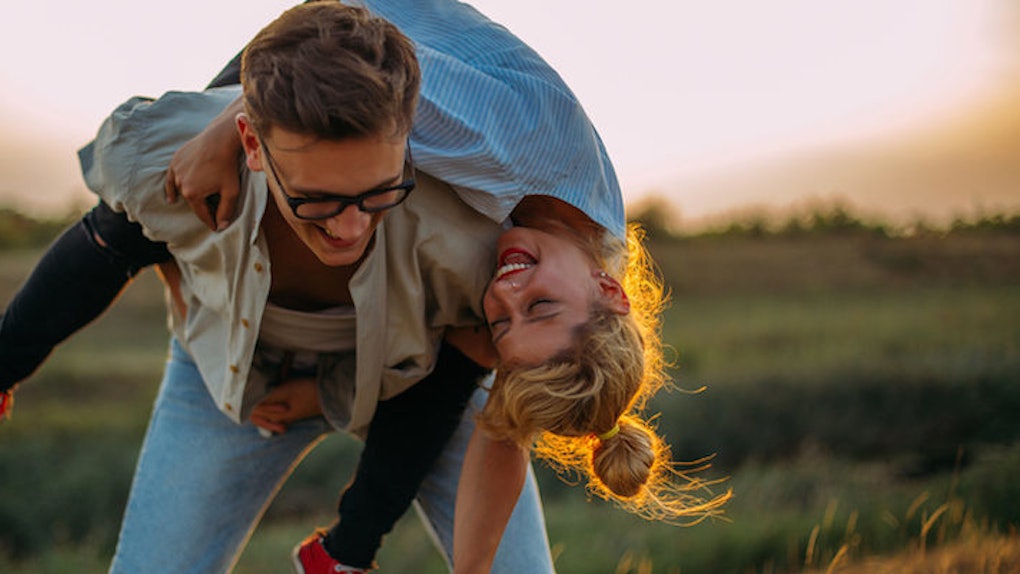 We Found Love In A One-Night Stand: It All Began With A Drunken Hookup

I have something important to say, so I'm going to cut to the f*cking chase with rapid-fire speed: F*ck the rules. You can, indeed, f*ck on the first date and end up in a long-term, hyper-committed, gloriously HEALTHY relationship.

So, my anxious girl-creatures across the universe who are currently racked with regret for sleeping too soon with the person they like, have no fear.

Because I've come to learn that some of the most deliriously happy, dutifully married couples I've had the pleasure of observing found love in a one-night stand.

I have a prime example: My lovely friend Lewis.

Two days before my 27th birthday, I attended his wedding outside of a Los Angeles library. He and his new wife were the most blazingly in love couple my keen eyes had ever borne witness too. You could feel electric sparks radiating through the stale air when they kissed.

I was acutely single at the time. As I bitterly sipped my champagne, I fell down the dark vortex. "I will never find true love," I harshly told myself.

After all, my lifestyle was too wild. I didn't online date. I worked too much. I wrote -- and obviously still write -- about goddamn sex on the Internet.

Just as I was losing hope, my dear friend Sara whispered in my ear, "You know they met on a one-night stand, right?"

"No, I thought they met online," I retorted back, irritated by her obvious ignorance.

"No" Sara persisted. "They met hammered at that house party we went to in Los Feliz -- remember? The night you jumped in the pool in your Marc Jacobs dress?"

One night, Lewis got really, really wasted. He was at a reckless Los Angeles house party that took place in the gargantuan mega mansion of the granddaughter of a major studio head.

Lewis decided it was a good idea to drink a half a bottle of an ungodly expensive dark whiskey straight out of its ornate bottle. Fueled by liquid courage, Lewis began boldly chatting with an impossibly cute girl whom he would have otherwise been far too fearful and anxious to utter a single word to.

She was madly exotic, her head a sea of insatiably wild, white-blonde salt-water-beach-waves, her eyes burning an ethereal sea foam green.

He complimented her on her vintage dress and offered her a Marlboro Light. Together they silently blew smoke rings into the smog-ridden LA sky and took in the dramatic display of polluted, mansion-adorned hills.

How he got there is hazy in his head, but the next thing Lewis knew, they were back at her place. Their bodies were entangled, twisted beneath her cotton-candy-pink sheets, and they were kissing and touching, deliriously intoxicated from the sweet, scandalous combination of liquor and lust.

The next thing he knew, they were having wild, drunken sex on her twin-sized bed. They fell asleep in a heap on top of one another, boozily snoring and sharing the same breath in a semi-blacked-out dream sleep.

They woke up the next morning sorely hungover, dehydrated as all f*cking hell and wildly amused at the hot pink lipstick smeared all over Lewis' body. After an ice-breaking cup of teeming hot coffee, they both confessed they didn't know one another's name for the life of them.

Lewis found out that the cute girl with the crazy beautiful hair was named Lola. He would have just gone home, left the one-night stand for a story for his future grandkids, but for some reason, unbeknownst to him, he stayed.

They were hungover and unfiltered and raw. They tucked themselves into her girly little bed in her tiny West Hollywood studio and just talked.

They talked about everything. She told him about her unhappy childhood growing up in a rural town. He told her about the first time he had his heart smashed. They exchanged secrets and kisses until the sun came up.

And now, here they were, under the springtime starless grey sky, declaring their undying love for one a-f*cking-nother.

I gazed at the two newlyweds holding hands at the alter. They looked picture-perfect, like the indie movie of my dreams, starring Zooey Deschanel or some other cool, lovable actress.

Lola was wearing a cream-colored vintage wedding gown and had daisies strewn about her untamed waves. She wasn't wearing much makeup. She had painted her nails black. My kind of f*cking bride.

As I took in the sight of these two adorable love birds, I was hit with an important, life-changing epiphany: You can find love in a one-night stand, and in fact, it's often the perfect foundation to a long-lasting, powerful relationship.

When you have a one-night stand, it's often because you were filled with irrepressible sweeps of instant animal attraction toward him or her. You were overcome with desire to jump his or her bones because you felt a natural fiery passion the moment you were in this person's presence.

I don't know about you, but fiery passion and animal attraction are two things I so desperately covet in my relationships. I want to work toward building a cohesive lifestyle, but I don't want to work for sexual attraction. That’s something I either have or I don't.

When you have sex with someone right off the bat, you quickly figure out if the two of you have sexual chemistry. So many times I've been a victim to societal pressures and followed the tired f*cking rule that you shouldn’t sleep with your partner until the third date, or you will murderously kill your chances at attaining a semblance of a real relationship.

And after holding out against my better judgment, when I finally did have sex, it's been a giant disappointment, and the whole tiresome three weeks of courting and dating had really been one sad f*cking waste of my time.

Let's say I have a one-night stand, and it's fantastic and passionate and sexy, but my partner doesn't want anything to do with me because I gave up the goods to soon. Well then F*CK that person.

I don't want to be in a relationship with someone who is going to look down on me for having sex on the first date (or first encounter, for that matter).

One of the hidden beauties of the drunken one-night stand is also the morning after. We're our most stripped down, no-holds-barred version of ourselves when we're amidst a hangover. We are fabulously blunt and unabashedly honest. We are just the right amount of vulnerable.

What better way to really get to know someone than when your eyes are ridden with smeared mascara, you have revolting whiskey breath and are in a state of absolute f*cking realness? There is no pretty facade to hide behind.

As I reached my groundbreaking epiphany about one-night stands being the perfect foundation for a relationship, I began to discover that a ton of the couples I know and deeply love met in an intoxicated hookup.

My sweet kittens, the bottom line is that there are no rules. There is no perfect etiquette guide on how to meet a soulmate.

Maybe you will follow the book to a T, hold out for a while and fall into the deepest love of your life. Maybe you will find your soulmate at the drag show after doing six shots of tequila. Maybe you will sleep with him or her on the first date, or maybe you won't. Love is too complex for rules.

So f*ck it, and never feel ashamed for how you met your partner. For you can find love in the most unlikely of places, even in a one-night stand after drinking whiskey at a stupid Hollywood party.