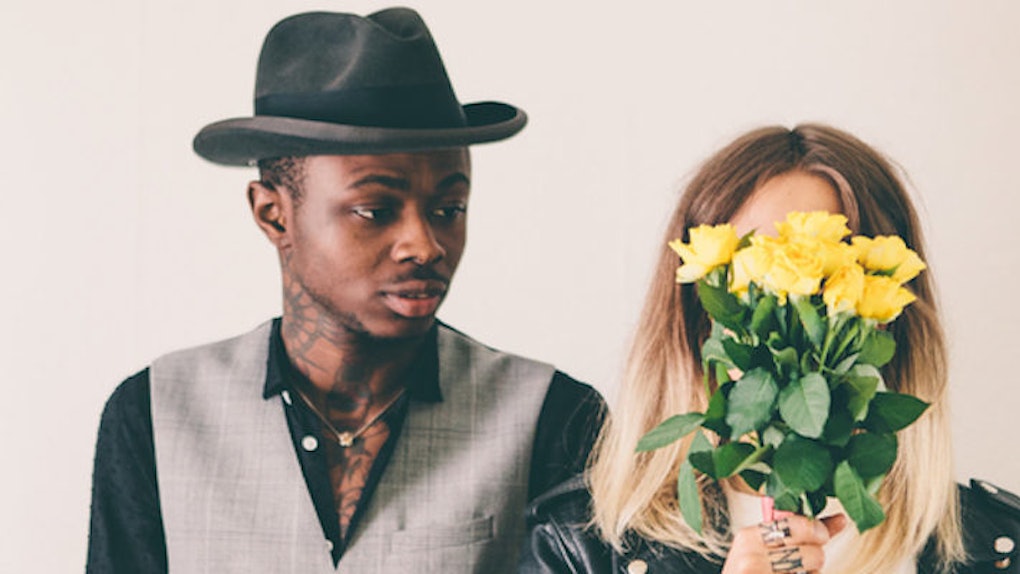 We all have our insecurities. Some are warranted, but most aren’t.

In today's world, we all have to abide by ridiculous -- no, impossible -- beauty standards. Even models are apparently no longer good-looking enough -- we Photoshop them, too.

We need fake beauty in order to appreciate it. It's absurd, and a lot of women feel this pressure.

When it comes to relationships, women need to stop being insecure with their men. Seriously. Stop it. If your man loves you, he finds you more beautiful than you will ever know.

You’d be very surprised to know what he’s thinking while you’re trying to hide your insecurities. There is nothing for you to feel insecure about, because the love you two share is secure.

Here are 10 insecurities that your boyfriend actually finds incredibly beautiful.

1. That little extra something

Those cute little tummy rolls. Those love handles that he likes to grip onto so much. That booty that has just the right amount of cushion. He loves it all.

He’s not looking for a skeleton posing as a model. He's looking for a bigger woman. And that’s what you are. He loves touching you so much that he wouldn’t have you any other way.

2. The way you look when you just wake up

You may think you look like crap, but the truth is that he thinks you look adorable.

Sure, your breath is probably not the best. Your hair is all over the place, and you’re not wearing any makeup (or whatever makeup you had on the night before is smeared all over your face and pillow).

He still finds you beautiful. The beauty he sees in you doesn’t change depending on the time. It’s constant.

Let’s be clear with one thing: that area does need to be maintained. Don’t think you can get away without rinsing for a few days and expect your boyfriend to sit down for a feast.

However, if you’re clean, then trust that he loves the way you taste and smell. In fact, I can guarantee that he does. How do I know? Because no man would ever eat box on the regular if he didn’t like what was on the menu.

So don’t be insecure about him going down on you. He’s enjoying it. So should you.

4. Your naked body in broad daylight

There’s little in this world that he finds more beautiful than your naked body sprawled out on the bed. Or the floor. Or pressed up against the wall. Or in the shower, as water runs down your curves.

He doesn’t want to turn the lights off because he wants to look at you. Don’t be shy. Embrace your femininity, and be proud of your naked body. He sure as hell is.

Otherwise, he wouldn’t be bragging about you to his boys (yeah, that happens).

5. Being ungroomed, unwaxed or unthreaded

That peach fuzz above your lip. Legs that prick his when they rub up against him. Your wild and untrimmed Garden of Eden between your legs.

It’s winter. He gets it.

Or rather, he doesn’t need to “get it"; he just doesn’t care. He finds it cute that you can be a bit lax with your personal hygiene. He may even be relieved, since it means he doesn't have to feel bad if he bums it for a while.

6. The way you look when you get out of the gym

Yes, he likes you all sticky and sweaty. Go figure.

And as for those yoga pants: The only thing he likes more than watching you wear them is helping you slip them off.

Some women are very insecure when it comes to sex (I’m sure guys are the same, but I wouldn't know). And that's a shame, really, because being insecure in the sack leads to mediocre sex.

There is literally nothing sexier than a woman who's secure and maybe even a little feisty in bed.

I’m sure you don’t think you look good from that angle, but he begs to differ.

8. The way you climax

I’m sure I’m not the only man in the world who gets off on making a woman orgasm. Even if your boyfriend isn’t the most generous person, I can promise you he loves it when you come.

The way you breathe. The way you moan. The way you scream. The way you try to push him away with your arms (but end up wrapping your legs around him and bringing him even closer). You’re a f*cking contradiction, and he loves it.

Don’t be shy. Let that beast out.

9. The way you look in that dress

Did you put on a couple pounds? Maybe. Does he care? Absolutely not. He’ll help you squeeze into that dress just as he’ll help you slip out of it and into his arms when you come home later that night.

Whether you’re puking your brains out after having one too many cocktails or in bed for a week with the flu, he still finds you beautiful. Don’t push him away; let him nurse you back to health.

In fact, this is a good way to figure out if your man is in it for the long run. If he takes care of you and tells you you’re beautiful when you clearly look like hell, he’s a keeper.