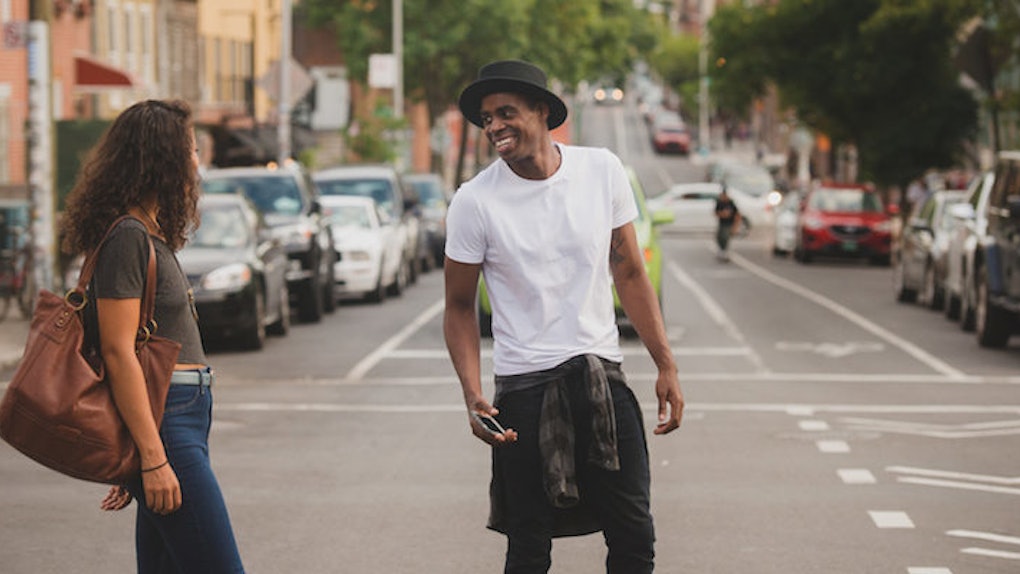 The day finally came. It was as if I was coming out of an apocalypse.

The zombies finally began to die off. The sun was peaking on the horizon, and for once, my head was finally up. I was facing straight ahead and no longer looking down.

It was my New Year's resolution to quit online dating for good. One by one, I deleted and uninstalled any dating apps I had left. I was finally disconnected, and I wasn't alone in my choice.

It seems like many people have made this their New Year's missions. They want to start connecting in real life again.

For some, this won't be an issue. Some of us have chosen all along to hold on to our old-fashioned techniques.

But for the rest of us, it's a problem. We are the ones who have relied solely on apps like Tinder and OkCupid to make connections in our busy lives, and we're trying to figure out how to reconnect.

By disconnecting from the online world of dating, we've realized we've lost our ability to connect in real life. Approaching people in person is actually pretty f*cking scary.

This is real life again, and it's always been this way. We've merely been hiding in the luxury of technology, and it's absolved us of our human responsibilities.

But we can't hide anymore. It's time to wake up and relearn. Most importantly, it's time for us to put our phones down and rebuild the dating society that has collapsed in this apocalypse.

It seems so simple in theory, but putting yourself out there again — physically and in person — will take some work. It's going to take time to get reacquainted to connecting with strangers you pass on street corners. This is especially true when a lot of us are still looking down at our phones, instead of paying attention to the life that's potentially and literally passing us by.

So, how are we going to do this? I'll tell you.

For some reason, high school comes to mind. Remember high school dating? It seemed so simple back then.

Aside from the drama that sometimes came with the breakup, meeting people and talking to people we were interested in was a lot easier. In fact, we didn't really give it a second thought. If we were into someone, we pursued it face-to-face.

If you thought someone was attractive, you made it your business to talk to him or her, or you at least had a friend do it for you. You asked people out.

You didn't hide your feelings. You uttered the words, “I like you” without much hesitation.

It was simple. It was innocent.

Well, what if the adult world of dating is just one giant high school? What if we could make what now seem like bold gestures as innocent and pure as they were back then?

It starts with adopting the mentality that even though we've grown and become jaded from rejections past, we are still those same adolescent teenagers looking to connect, feel and explore love. But if you're still baffled regarding how to bring back those old school ways, here are a few ideas from our pubescent years we can reapply:

The reason we connected with so many people in our high school days wasn't just because we were all trapped within the same concrete walls. It's also because we were engaged in our surroundings. When we went to our lockers between periods, we would engage the people we saw along the way.

We actually saw faces at eye level, instead of the ones we're staring down into on our phones. Look up, and start noticing what's right in front of you every single day.

2. Smile, and use your eyes and body language.

It's hard to seem approachable when you suffer from resting bitch face or are just a stressed out adult in general. But even through the sour pouts, make sure to smile and give off good eye contact and body language.

I now not only look up, but I also look strangers right in the eye as I pass them. I'm amazed by the number of people who are completely oblivious.

If you don't look approachable, you'll never be approached. It's amazing to realize we could literally start a new dating revolution by engaging without words.

I'm not sure what it is about Millennials, but we sometimes seem almost offended when a complete stranger talks to us. I'm about to blow your mind right now:

Did you know that when a stranger talks to you, 99 percent of the time, he or she is harmless and just interested in your response? This person just wants to engage with other humans. Crazy, right?

Don't be afraid of making small talk. It could be as simple as commenting on an item the good-looking stranger is eyeing in the grocery aisle.

For example: “I've been meaning to try that coffee. How do you like it?” is the same as “Hey, I need help on chapter three of our homework.” Be creative, or be simple. The point is to just get talking lightly.

4. Revert to retro acts of bravery.

Remember when we used to send those dorky notes to our crushes at school? You know the ones: “Do you like me? Pick yes, no or maybe.”

We would create boxes for our objects of affection to check off accordingly. Well, maybe don't do that because it would be creepy. But, we could all stand to see more acts of courage while we attempt to connect in real life.

Try something like sending the person your phone number on a napkin. Have it sent over by the bartender, along with a drink on your tab. Or just send a drink itself. This opens up the gateway for a conversation.

5. Understand that rejection will happen.

Rejection was an inevitable part of high school, and it's been a continued reality all the way into adulthood. But guess what? You survived that sh*t like a boss, and you'll do it again.

Take risks. Be bold and brave. Life is too short to spend hiding your face in your smartphone.

6. Ask your love interest out properly.

Once you've finally engaged with the person you're into, ask him or her out properly. None of this, “What's your Twitter and Facebook info?” Ask this person if he or she would like to go for a drink sometime. Or (gasp!) maybe ask the person for an actual dinner.

Lose the words “hang out” and “meet up,” and start using words like “Would you like…” and “May I take you out sometime?" Insert genuine and concrete intent in your interest. Don't get stuck in that grey area that exists in dating today.

In high school, when you liked someone, you asked him or her out in a simple way. It was astoundingly simple. Let's be simple again.

7. Ask for a real phone number.

Once you've successfully asked someone out, and he or she has accepted in real life (yay!), ask for his or her contact information. You would think this would be a no-brainer, but I've actually had the experience myself — on more than one occasion — where the person has said he or she would find me on Facebook.

Um, what? No. Also, don't wait three days to call or text either. You're better than that.

8. Reject and accept rejection with grace.

If it fails, and you have to end it or are the one being rejected, make sure you do it with some class. Don't be like all those assh*les online, who start spewing hateful names because they literally can't handle being grownups.

Be kind. Be clear, but be kind.

At the end of the day, if we could all learn to be a bit nicer to each other — just like when we were younger and uninhibited — it just might spark this crazy throwback to our real-life dating world: the world in which we no longer have to swipe right or left in someone's face.

The dating world is real, and it's right in front of you every single day. You just have to look up and start talking again.