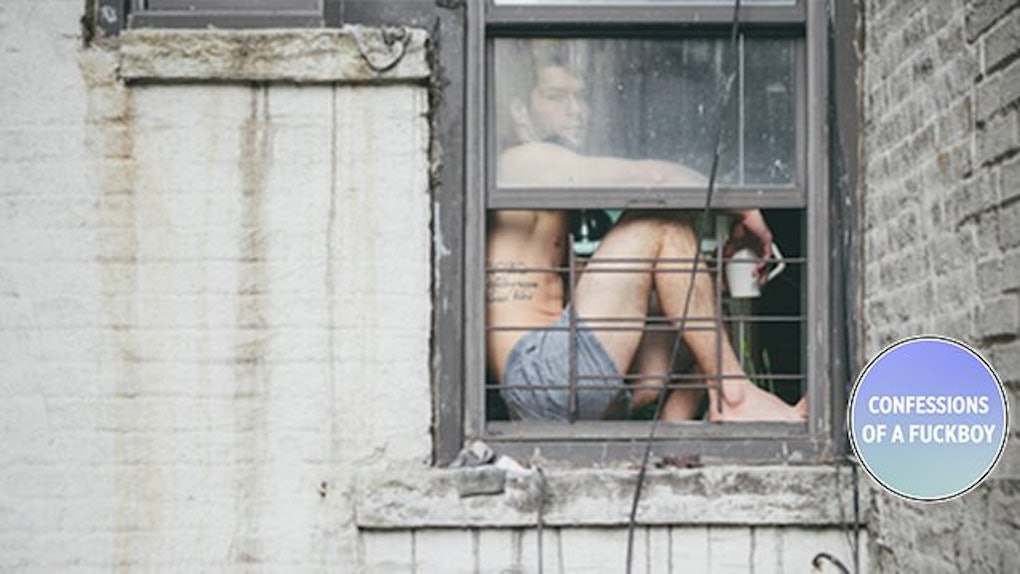 We awoke wrapped around each other at the start of a frigid February morning, your cat treating the top of my head like some half-exposed stone sitting just off a river bank, tapping my skull – which I began to realize felt like the size of Slovenia – with a tuxedo-colored claw, as if to test it for firmness.

I groan-mumbled a curse and you simply smiled, gathered him gracefully in your amber-tinted arm.

With a quick flick of the blinds, you sequestered the sun and hopped over my bare knees, almost unconscionably peppy for the hour, to skip into the kitchen.

You hummed as you went. I heard the sizzle of the stove. Naked and flaccid, I laid entwined in your pillows, helpless and impossible and rancid, searching for your name and feeling more confused than remorseful for it.

Before long, you walked in, paused, saw it all — me, motionless, un-muscular and unmoving — and offered me an omelet.

I thanked you, dressed and ate. Then, when you went to the toilet, I climbed out the window and dropped two stories to the street.

You should have known that's the type of man I was right there, and maybe you did. You had to have. And you could have saved us both a lot of time and nerves by realizing it then.

I was not some pet project. I was not to be fixed.  I was fine the way I was — a little selfish, cowardly and reckless, yes, that much was plain to see for anyone standing on that pre-dawn Brooklyn blacktop.

But I was also fine and content and proud of my flaws because they were mine.

I was not some pet project. I was not to be fixed. I was fine the way I was — a little selfish, cowardly and reckless, yes. But I was also fine and content and proud of my flaws because they were mine.

But that didn't stop you, and to my immeasurable surprise, there you were, standing at the corner as I limped toward it. I stood speechless.

“I think you're wrong about us,” you said, with just a slightly concerned smile.

“I choose to see the good in people,” you said. “You left a sock inside. Why don't you come get it?”

I don't know what it was. Maybe it was the way you went after what you wanted without recourse or fear of failure. Maybe it was how my great escape had sliced what felt like a wet gash into my left, now unprotected pinky toe.

I don't know. But I went back up, and didn't leave for about a week.

We had to conjure up a different story of how we met for my family, of course — the judgmental prudes that they are  — and we even tweaked the details for our friends.

You'd lassoed me in with your cat and your omelets and courage and certainty and long, hairless arms and the way you'd wrap them around me. I wasn't unhappy about it, all of it, at all.

The first weeks went innocently enough, at least on the surface. We were a tender and a terrifying thing.

I had this certainty we'd never be nothing more than ephemeral, and I kept looking for reasons to leave. You'd talk me into staying, the same way as the first time, winning me over with an odd and complete assurance that you were right.

Like all great manipulators, you had a gift for selling your will as my best interest.

I had this certainty we'd never be nothing more than ephemeral, and I kept looking for reasons to leave. You'd talk me into staying, the same way as the first time, winning me over with an odd and complete assurance that you were right. Like all great manipulators, you had a gift for selling your will as my best interest.

“You're doing so much better,” you'd say.

And before I could reply with a “better than what?” you'd have me wrapped up in your arms.

You bought me new clothes. You grabbed cigarettes from my mouth. You came over and cleaned my sink and my car, and it all felt good for a while.

Then, we went out with Jimmy and had all the momentum to drink until dawn, and you said: "Hmmm. Maybe it would be best if we got on home. I don't know.” We went on home.

The next morning, you brought me an omelet and said: “Hmmm. Maybe Jimmy isn't the best person for you be hanging around anymore. I don't know.”

You sat next to me and ran your hairless arms through my very hairy head. “Why don't you cut this? Wouldn't it be better for everyone to see your face?”

Then, I published a piece about oral sex, and after you read it you said: “Hmmm. Maybe it would be better for you to write about something nicer. I don't know.”

I lost all inspiration to write, and for months didn't produce as much as a goddamn predicate. Jimmy stopped texting. You procured me a job in an office doing remedial work that required a bowtie, a 6 am alarm call and, above all else, an obsequious suppression of free will.

I went running. I ate more frequently. I watched The Voice. Soon, the drinking skirted to a complete halt.

I became a horribly dismal contributor to functioning society and in the meantime, checked all the boyfriend boxes.

I became a horribly dismal contributor to functioning society and in the meantime, checked all the boyfriend boxes.

But I couldn't get anything done. I couldn't think. Everything felt lifeless. In my attempt to be agreeable, I found myself nodding to the removal of aspects of my life I always enjoyed.

They each felt like a small price to pay, but together they mounted into a tower of repressed regret, cursed with a faulty foundation that jiggled me restless and cold.

With each concession, I could almost feel this tugging coming from deep within, this doomed resistance, a vestigial sliver of my former self screaming in muted tones, like a trapped coal miner begging for breath.

Nothing about me reminded me of myself, but I had you, telling me things were good.

And before I could ask “how do you know?” you'd have me wrapped up in your arms.

What are “good” and “bad” anyway, if not for subjective judgments weaponized for cause? Who are you to judge?

When you want to date someone, you're supposed to want all of them. There are always going to be parts you approve of more than most. Aren't we actually better off – to use your term — accepting them, cherishing them as imperfections, rather than rejecting them all together?

Those felt like the two purest options. There was honesty in saying yes or no to all of someone and remaining loyal to that decision. There was much less honesty in taking the parts of someone you didn't like and trying to improve them.

When you want to date someone, you're supposed to want all of them. There are always going to be parts you approve of more than most. There was honesty in saying yes or no to all of someone and remaining loyal to that decision. There was much less honesty in taking the parts of someone you didn't like and trying to improve them.

These thoughts had been bubbling up in me for some time before that night with your hometown friends on that tacky rooftop, when they finally broke loose.

You had me all wrapped up tight in a sweater vest and my hair cut short and my balls twisted up so high, they may as well have been in my stomach.

I said hello cordially and sipped one very sad beer.

“This is the bad boy we keep hearing so much about?” one of your friends pressed.

“Doesn't he look adorable?” you pinched my cheek. “I'm fixing him up nice.”

It suddenly felt as if I was being suffocated by my tie. Fix him up? Was I an old shed?

Then it hit me: You didn't see the good in people. You looked for the soft spots, the parts you could massage and mold like paper mâché.

I chugged the beer.

“You're better off slowing down, sweetie,” you said.

I chugged another and I went back to your apartment to pack.

“It's for real this time,” I warned when you caught up. I stuffed some underwear into a backpack.

“Don't fucking 'buttercup' me,” I said. “I was my own man before I met you. I'm not falling for this bullshit anymore.”

“Falling for what, buttercup? This is just your anger getting the best of you again.”

“My anger is finally letting me see things clearly,” I said. “I'm not SOME GROWN-UP GIRL SCOUT PROJECT FOR YOU TO FIX UP AND SHOW OFF TO YOUR STEPFORD WIFE FRIENDS!”

“You're a better version of yourself now, Treez,” you said. “The difference is night and day from when I met you.”

“I was fine,” I said, "before you dressed me up in these smocks, before you made me cut my hair. My hair! And this vest! I LOOK LIKE I'M AT BIBLE CAMP! ARGH!"

I ripped the vest over my head and threw it to the ground. I couldn't tell if I was deranged or finally sane again.

“We're better this way,” you said.

“What is 'we'? I climbed out the goddamn window! I didn't ask for any of this, OK? I didn't ask you for a fucking personality makeover. Or to help me change careers or lose my friends. I don't know who the fuck you think you are.”

“Because it's MY shit. I can do whatever the hell I want with it!”

I stomped over to the cabinet where I know you hid a bottle of red.

“If you didn't like me the way I was, why the hell did you come running after me anyway?” I took a long, triumphant pull. You grabbed my arm. “THIS IS WHAT I'M GOOD AT. THIS IS REALLY ME. YOU DIDN'T WANT TO BE WITH ME. YOU WANTED NOTHING TO DO WITH ME. NOW GET YOUR FILTHY CLAWS THE FUCK OUT OF ME!”

I pushed you away and made my way toward the window, the only mode of egress in so long that made me feel truly free.

I don't think it's a coincidence I've written these words now, not then, or that I wake up in the morning with the indescribable pride that comes with doing so when I want, how I want.

I'm drinking again and eating pizza and writing and my car is filthy, but I'm paying the rent. I'm eating. I'm alive. I am not without flaws, but I am me – the way I'm supposed to be.

And that's enough for me.

I am not without flaws, but I am me – the way I'm supposed to be. And that's enough for me.

Now all these sunrises, all these pre-dawn escapes later, I always cross the street before I reach the corner. Each time, as I stumble to the subway, I think of omelets, how I'd really appreciate one but still can't stand the taste.

And sometimes, as I'm lying next to a stranger in nothing but two unmatched socks and disheveled, beer-soaked sheets, I stop for a long pause to ponder: