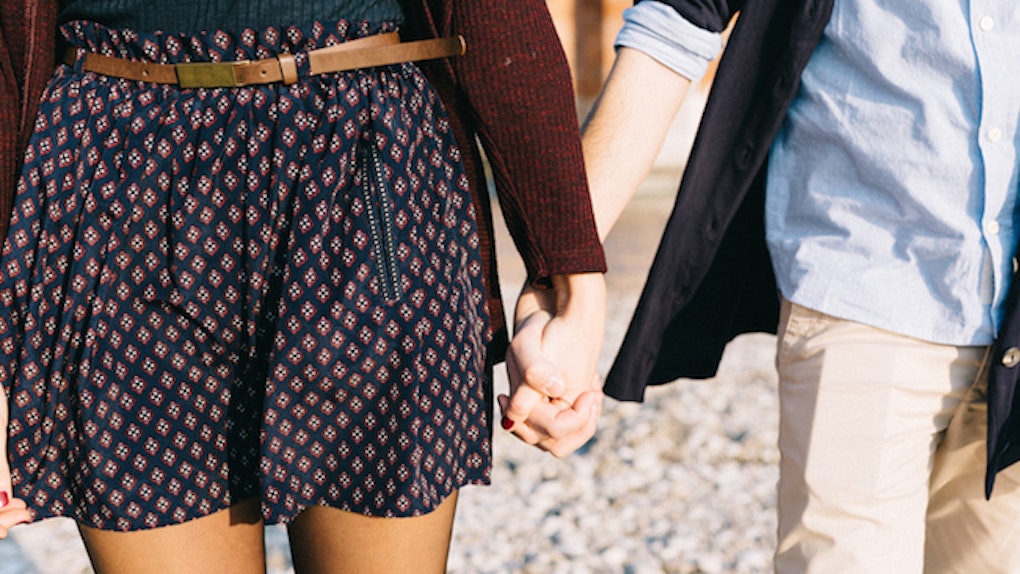 Have a really bad headache?

Cramps killing you this month?

Forget the Advil. A new study says all it takes to ease that pain is to spend some time holding hands with a boyfriend who loves you, according to Science Daily.

"The more empathic the partner and the stronger the analgesic effect, the higher the synchronization between the two when they are touching," explained Pavel Goldstein, lead study author and postdoctoral pain researcher in the Cognitive and Affective Neuroscience Lab at CU Boulder.

Goldstein got the idea for the study when his wife was going into labor. "My wife was in pain, and all I could think was, 'What can I do to help her?' I reached for her hand and it seemed to help," he told Science Daily. "I wanted to test it out in the lab: Can one really decrease pain with touch, and if so, how?"

So how'd they conduct the study?

In order to conduct the study, published in the Journal of Scientific Reports, Goldstein and his colleagues first recruited 22 long-term young (age 23 to 32) straight couples.

Once they recruited the couples, the next step was to put them through a series of tests that mimicked his own situation with his wife in the delivery room.

Men were told to observe the situation, while their female partners were assigned the role of the "target." The guys were instructed to either wait outside of the room their ladies were in, sit in the room with them, or hold their hand while they're in the room with them. The ladies had to deal with a mild heat-related pain for about two minutes while this was happening.

What did they find out?

Basically what the study found is that having an empathetic partner to hold your hand when you're in pain can actually mellow out your heart rate and the high pain levels.

Their findings echoed those of previous studies, which looked into something called  "interpersonal synchronization," meaning people tend to physiologically sync up to the people they're around, especially if they're romantically involved.

Before the women started enduring the pain in Goldstein's study, the researchers found that they physiologically synced up (in things like breathing and heart rates) to their partners as soon as they entered the room.

That being said, as soon as they started enduring the pain, the synchronization was broken. "It appears that pain totally interrupts this interpersonal synchronization between couples," Goldstein told Science Daily.

There was just one thing that could bring the couples back in sync with each other: touch. Goldstein explained, "Touch brings it [interpersonal synchronization] back."

Furthermore, the more empathetic the man was for the pain his partner was going through, the more synchronized their bodies became and, as a result, the less pain she was in.

So sorry, ladies, but paying a random dude on the street five bucks to hold your hand next time you're having a migraine isn't going to have quite the same effect.

But if you've got a loving boyfriend, time to put his hand to use.

(OK, I know that sounded dirty, but I swear I didn't mean for it to.)