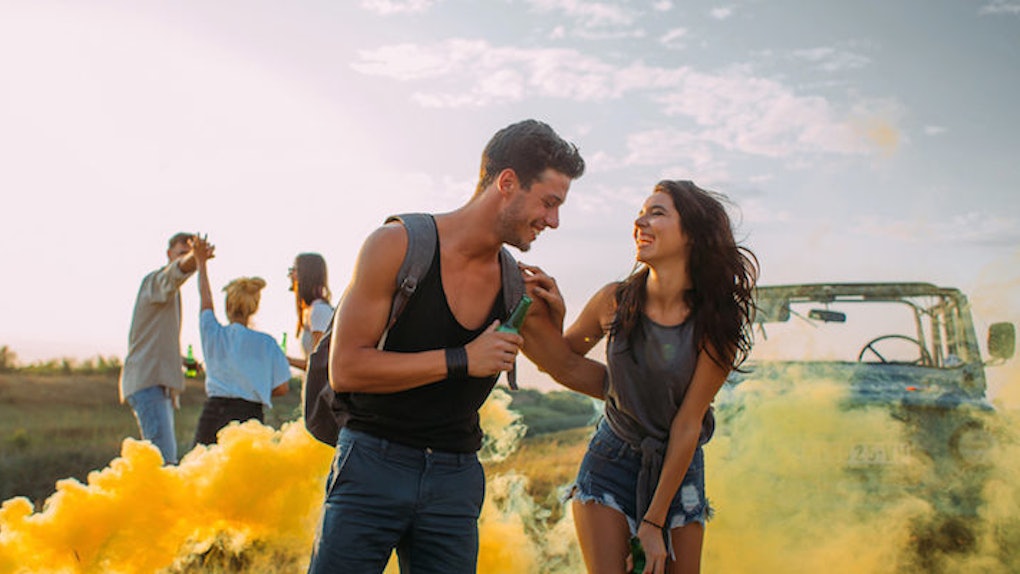 Why 'Hanging Out' Is Not An Acceptable Level Of Dating Progression

I can’t put my finger on it, and maybe you can’t either, but what is it with dating? You know he likes you, but to what extent? There’s some interest, but one thing leads to another, and boom, you’re hanging out.

I know you were expecting something bigger. It’s not a huge step up from being friends, and not quite at “talking,” which is just as vague.

It’s this weird limbo between just friends and hooking up, and I don’t like it. What happened to knowing if you were dating or not? How will I know you like me? Just tell me already because I want to know if I should wait five minutes before I open your Snapchat, and the anxiety is killing me.

Don’t we all like some type of certainty? To know if you are just hanging out, you're the only one he's hanging out with? Or to know he sees this thing as more than a casual hookup?

Or maybe this is just a couple-times-a-week thing, and that’s all it will ever be.

There just needs to be some definition. Yes, it’s all very ambiguous and confusing, and I might give up on it altogether, but don’t lose sight of the goal.

Typically, if you like him and he likes you, you date. Or so I think. So I guess you can start imagining your own drawer in his apartment, or having a romantic dinner together with wine and, well, more wine.

Think of just having him there when you need him and for him to rely on you because you’re the only one who understands. That right there, is a bond. It doesn’t come often, but it’s there, people! That’s the goal.

So what is this hanging out thing you’re doing?

I don’t know, but instead of putting yourself down or letting everyone and their mother tell you how dumb you are, remember, at least you have something.

Hanging out isn’t something you’d tell your mother during the holidays, but it’s nothing to torture yourself over, either. It’s the first step, and definitely not the last because we want to get you out of the post-friend zone.

First, let's identify what hanging out is:

Hanging out isn’t really intentional. It kind of sneaks up on you and you’re left wondering how it even happened (usually after a few shots of tequila).

It’s when the cute guy at the bar catches your eye, and you’re not imagining it. He’s checking you out and motions that he’ll buy you another drink. How can you resist his smile and another margarita?

What’s a girl to do?

That’s how it starts. You hang around his friends and they think you’re cool, and you think you’re getting brownie points with this guy, but he’s only thinking about the next few hours.

And if you play your cards right, he’ll want to see you again. That’s when you think, “What the heck are we?”

It’s almost like the aftermath of the verb. It’s the stage you can’t even admit to yourself. It’s a forever cycle that doesn’t stop unless you do something about it.

You don’t want to be the girl who’s always around. His friends kind of know you and his family has heard about you, but you’re “that girl.”

You don’t have a name; you’re just “that girl.” It’s not that you’re not important because you are, but you’re not giving yourself any credit. Get with it! If you keep doing the verb, you become the noun.

After hanging for months, you’re not just going to think about what you guys are to each other; you’ll actually fire the question, “What the heck are we?”

No one likes to ask that question and no one wants to get it wrong.

Well, what is it? Do you know?

Subtle hints are my go-to for any situation, but usually, you’re still left with a question mark for your relationship status.

Don’t give me that "it’s complicated" crap because you’re better than that. If it’s a conversation you need to have, then have at it.

Express how you feel, and if you’re not on the same page, pick a different book because it’s a dead end. If you’re into that, go ahead, but personally, I’m into having long-lasting relationships, walks on the beach and knowing we can hold hands because we’re dating.

There’s comfort in knowing that even though my palms are sweaty, my hand is the only one he wants to hold.

It’s time to be intentional about our actions and say what we mean. Not expressing myself is the equivalent of holding my breath longer than a minute: I can’t do it.

I want to feel secure and know who I am to someone, even if we start off a bit shaky. There’s no shame in that.

Haven’t you’ve heard, some people get married drunk and forget who they even got married to? That’s not you, so you have a fighting chance!

Think of it like this: Hanging out is a phase, and hopefully, it’ll go away soon, along with crop tops and bad ombrés. If you can skip that weird waiting period, all power to you.

For the rest of us screwups, we have to ditch the verb, skip the noun and be brave enough to define a real status.