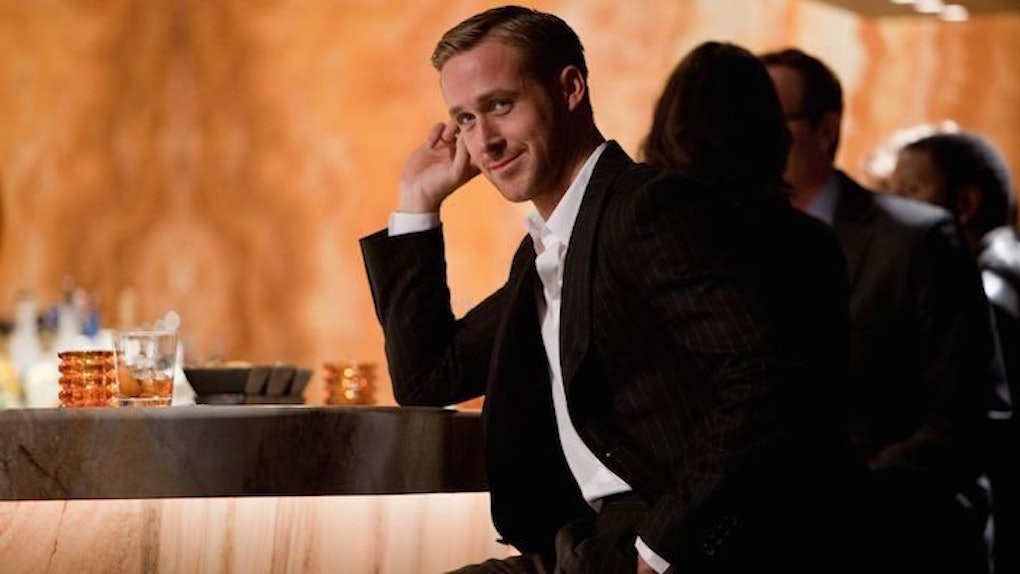 All social groups have their own stars of the show, and they're the ones who will make sure to stand out from the rest. Guys are no exception to this societal rule, and you'll most likely run into a few of these leading men when you're out at the bar or club.

Here are the nine types of guys you will meet on your night out:

This guy will stop at nothing to get what he wants. He's smart, cunning and blunt. He will not take "no" for an answer. Once he sets his target, he'll do everything he can to score.

This guy has a great memory. He learns lines, counter lines, jokes and stories by heart before he goes out. He'll serve them to you with a large, sharky smile and a sweet gaze, all while patting your back. That's pretty much the nicest thing he'll do for you.

Nothing the sniper says or does can be taken seriously, but he's a great lover. (Experience must count in some ways, right?)

Unfortunately, the sniper doesn't have much time to lose. If you're not going to give him something to go on about for 10 minutes, he'll probably readjust his sights and move on to his next target.

He's the guy who loves his drink, and he's not ashamed to show it. His relationship with the bottle is intimate and all around reciprocal.

I call this guy the "twister" because that's how he acts. He'll probably give you a grumpy look, but don't despair. It's just because it's really hard for him to see you right now.

Make sure you listen to what he has to say. It will probably be something on the lines of, “Blah, blah, blah.” Well said, sir.

Politely decline and keep your distance. This is not the guy you want to be around when the booze starts dancing in his stomach. Yuck.

This one looks so good that you might confuse him with Barbie's Ken. He knows the only way to get women is to sit around like a real man and wait for them to approach him. Yeah, that's exactly what he needs to do.

He also thinks he looks so good that girls are going to pay for his drinks. If you want this real good-looking man in your life, make sure you're not afraid to open that wallet. We all know buying someone a drink is the way to go.

He is the celeb in this place. He's the regular everyone knows. This guy is loud, and he takes up a ton of space.

His excitement is so obvious that I always wonder where it comes from. I'm sure it must be the “fancy” drinks he's always having.

Sound good? Well, don't get your hopes up too soon.

You won't be able to get near this guy unless you match his "audience" selection criteria. To meet him, you basically have to look amazed, nod as if you understand and agree with everything he says, laugh louder than he does, never interrupt him, give him space to draw imaginary trees around the table (really huge trees) and altogether sit quiet. Pose as if you've got your ears cocked, and when he finally stops talking for a couple of seconds, raise your hands up for applause.

Yeah, you know him. He's that guy who gives you the grumbling noise when he passes you, just before he leaves his amazing scent to dwindle in the air for a few more seconds.

This guy has much to show you: his awesome chinos, that checked shirt with the patched elbows and, inevitably, his super cool, slim fit jeans. He's a "true artist" in everything he does. Hence, all his sentences start with “I” and end with “mine.”

He won't approach you because he's too damn arrogant. But, he'll do you the favor of taking a picture because that's what artists like him do.

His age is ambiguous, just as his preferences in women are. Any type will do.

This guy has such a deep look that he practically scares you off with a simple stare and clumsy grin. Although the typical Addams family makeup is missing, his clothes, hair-do and moves will remind you of his medieval origins.

Tread lightly when you give him your phone number because it'll take a while before he gets the hint.

This is the guy who whines all the time about absolutely everything. The music is too loud, the place is too crowded, his ex was a bitch, his job sucks and he has a bellyache. He'll keep on going with his humming forever.

This manly man wants you to like him because he's "helpless" and lonely. This works well for women who like to “fix” things, but even if you're one of them, do your best to not fall for his charms. If you give him a little attention, he'll stick to you like glue.

This one is my favorite. He's so damn nice and oblivious that it's borderline sad and funny at the same time. This is the type of guy who will stay around you the entire night. You'll meet other guys, your boyfriend and your friends, and he'll still be there.

He's not going to say anything. The night continues, and he's still there. He's thinking and wondering what he should say.

Around 2 am (or 4 am), when he's had his fill of beer and you've had your fill of either your boyfriend or the super cute new guy you've been making out with for the past two hours, he'll come up to you and say, “Hey pretty lady, can I get your number?”

Why is he the nice guy? Besides the fact that he's totally oblivious of what's going on around him, he's nice because he let you have an amazing night without any interruptions. Also, he makes you smile just before you go home.

This one may actually be a keeper. (Wink.)

This is typically an older man. He's out of his comfort zone at the club. He's clearly not the life of the party because he just sits at the bar and waits for girls to accept his drinks.

There you have it. These are the nine types of guys you'll meet on every night out. The next time you go out, make sure you keep an eye out.

Fun will be had. Just remember: While some guys made it on this list, many others didn't. One of them might just be the right man for you.

Want more awesome advice? Visit my blog (HisDesires.com), get my free e-book and learn exactly how to meet and keep a quality guy in your life.