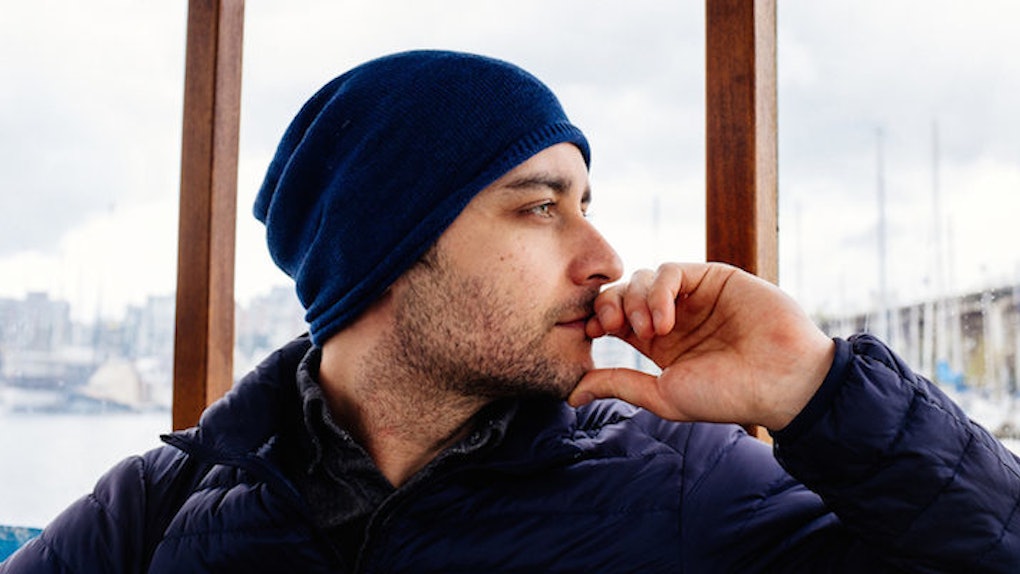 For the most part, we all have at least one. At least one person whose memory is so deeply embedded into our psyche that he or she invades more thoughts than he or she should on a daily basis.

Whether it's been weeks, months or years since you've seen this person, whether this person moved on or you moved on, his or her place, in your mind's eye, is permanent. You can recall every detail of the one who got away's face, including the frown lines, the crooked smile, the birthmarks and the way his or her eyes would sparkle when he or she laughed.

And as well you should, since you've spent so much time gazing at this person. As a great artist, Felt, once said, “I'll be looking at your face like I'll be tested on it later." I think we can all remember at least one person we looked at with such intensity.

For so many of us, it was a "right person, wrong time" kind of situation. It sucks, and when you think about it, you start to wonder why fate decided to bend you over and shove it in with no lube. The questions still come, like, "Why the f*ck did it have to be this way?" and "Why couldn't I fix it?"

Well, hindsight is always 20/20; it's usually one of those “if I knew then what I know now” things. That's easy enough to understand, but seems rather unfair when you find yourself comparing your dates to them and realizing that nobody seems to measure up.

That realization is usually accompanied by a paralyzing fear that you're going to end up old and alone, with a multitude of animals and a bad temper, screaming at neighborhood children for being on your lawn. All because you lost the one who you believe was your chance at true fairy tale love, the type that is glamorized in, like, every f*cking TV show and movie ever made. (At least it seems that way when you've been single for a while.)

This is all inevitable, but it's not all bad. Once you think rationally about it all, you start to realize it was a great learning experience. This is something that can teach you more than any class in any grade in any school. These are real life lessons and sh*t that will be applicable in the future, if you're smart enough to apply them. Maybe, just maybe, by doing so, it'll provide a healthier foundation for you to build a future relationship on.

These are five things I've learned after dwelling on the past and one who got away:

1. Not all love lasts forever, and it doesn't have to.

Everyone longs for and believes in that undying love, the love shared between two people as they grow old together. The love that brings tears to the eyes of anyone with even an inkling of romanticism. The love that makes you feel something fierce when you see an old couple holding hands, and you just know they've been doing that happily for 40+ years. Yes, that is ideal, and that is certainly true love. But who's to say that's the only type of love to cherish?

I read something recently that really resonated with me; it was a quote from a book written by the world's greatest pick-up artist turned self-help guru, Neil Strauss:

We have this idea that love is supposed to last forever. But love isn't like that. It's a free-flowing energy that comes and goes when it pleases. Sometimes, it stays for life; other times, it stays for a second, a day, a month or a year. So don't fear love when it comes simply because it makes you vulnerable. But don't be surprised when it leaves either. Just be glad you had the opportunity to experience it.

This blew my mind and changed my entire perspective. I was so busy hating love and cursing it for the pain that it caused, that I forgot to be grateful. I've been in love three times. Some people don't ever fall in love. I should appreciate the fact that I was able to experience and embrace the most powerful emotion there is, multiple times.

Not to mention, every one of those girls holds a place in my heart and taught me about myself. For that I will be forever indebted.

I've made mistakes in every relationship I have had, but so have they. Through it all, I learned what's right for me.

How I should behave, how I want my future significant other to behave, and what I can/can't deal with. I've learned about the traits that matter most to me and what doesn't really mean jack sh*t. I can know, almost instantaneously, if someone is incompatible with me or if there is a chance we can develop into something. If I didn't suffer through the wrong relationships, I would have no idea what the right one would look like when (if) the day comes when it's staring me in the face.

3. You need to put the same amount of effort into keeping someone as you did into getting the one who got away.

This is true for everyone, but I feel it's especially true for guys.

Ladies, do you have any idea how many hoops we'll f*cking leap through to get your attention? Or the way we'll bend over backward to keep it? We have a history of doing crazy sh*t in pursuit of the opposite sex, and we put so much thought into every move we make.

The problem is, once we do all of that and we hooked someone in, we get lazy over time. The "good morning" texts become less frequent, the "flowers for no reason" thing happens once in a blue moon, and we start to take for granted what we have.

That goes for everyone, men and women. We become complacent and stop putting in effort. We stop focusing on making sure the person we're with feels special. We stop looking at our partners like they're the only people in the room, no matter where we go.

That is one of the biggest downfalls of most relationships. Think about it, what if we kept up with the same gestures that made them fall head over heels in the first place? Would the romance ever really falter then?

I know that life gets hectic; I'm well aware that sh*t happens, but if we could manage to even put 80 percent of that original effort in, I think so many relationships could be saved. If you want something to happily last, never stop trying to make your partner fall deeper in love with you (to put it simply).

4. Don't settle for the sake of settling down, and don't fall in love with the idea of love.

These two go hand in hand, so I consider it one thing to list. Especially now, this time of year, a couple months after the major holidays and after Valentine's Day, people start to analyze why they're single. Some people are willing to dive headfirst into any relationship just to feel that validation. If you have ever even thought you found “the one,” possibly multiple times in your life, you're able to see that a relationship destined to fail from the start is worse than no relationship at all.

In fact, it's been said that a relationship shouldn't be considered a failure because it doesn't last forever. It's a failure when two people stay in it for longer than it's working.

When you've been in the trenches of this love sh*t, fought the losing wars and made it out alive, but not unscathed, you get a sense of clarity. You understand how powerful the emotion is, why people are in love with the idea of love, and you understand that you will never let that happen to you.

You refuse to settle for less than you want, less than you're worth and less than you need in a future partner. You won't lower your standards and settle for someone just for the sake of settling down. You know damn well that you're waiting for that person who makes your heart skip a beat when you see him or her.

When you fall in love next, it'll be with the deepest parts of that person and his or her soul, not just with the idea of being a happy couple that single people envy. In other words, you know next time you'll do sh*t right.

5. Don't lose yourself in the process of finding someone.

I'm guilty of this, and I'm certain so many others are as well. You get so wrapped up in finding out about your new partner, his or her interests and trying to prove your compatibility that you start to lose focus. The focus on your passions, drive, hobbies and the things that shape you as an individual get deterred until your world becomes about his or her world.

As much as I do believe in the “two souls become one” notion when true love and marriage occurs, I can never stand by and let myself lose the things that made me the way I have been in the past. I was a shell of who I am when I was so wrapped up in a relationship. I didn't write the way I needed to. I didn't make music consistently. I was worried about my artistic content offending my partner, and I couldn't take the solitary time needed to do what I needed to without fear of bothering him or her. That's no way to live and no way to love.

I don't blame anyone but myself for this, and if you've done the same sh*t, neither can you. The bottom line is everyone needs to find the median, and work on balancing being someone else's other half while still being 100 percent you.

Well, that's it. I guaran-f*cking-tee there is more sh*t that I learned that I'm forgetting. I'm also positive that in times of introspection and reminiscing, there is more that I will learn from everything.

In the last 12 years or so, I've had three long-term relationships, and all three crashed and burned. Some were messier than others, but I hold no resentment or ill will toward any of them. They're all great girls in their own rights, just maybe not great for me.

Or, at least, they weren't at the time. I find that my consciousness is ever evolving and I learn more about how I need to be in a relationship, so who really knows if I could make one work with anyone right now or not.

I know this article wasn't funny, and it wasn't supposed to be. As much as I enjoy writing about drinking, f*cking, being a man-whore, doing dumb sh*t and trying to find meaning out of all of it, I can't do that with every piece. I do have a heart (and hopefully it's in better shape than my liver).