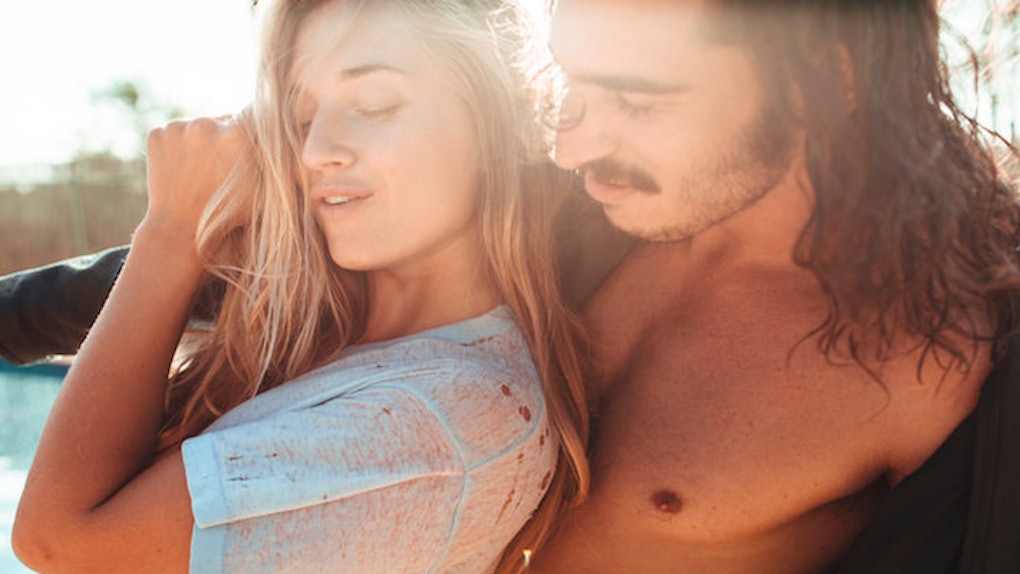 It was a Saturday morning in New York City, and I was lying in the guy-I-kind-of-thought-I-was-dating’s bed, tucked under his cream-colored sheets with a book of poems I had picked up from his windowsill.

Yes, an actual book of poems. Clichéd, but the hopeless romantic in me was ecstatic.

I drifted asleep and then awoke to the sound of pots and pans clanging and the smell of something wonderful cooking. I sat up slowly. My eyes groggily re-adjusted to the bright room.

The guy I was half-dating-half-fucking walked out of the kitchen and into the bedroom. In his hands was a tray of food. Upon closer inspection, I saw it was a proper English breakfast: griddle cakes, thin-sliced bacon and perfectly steeped royal blend tea.

“Don’t you lift a finger,” he said in his cute Irish brogue, kissing me on the forehead.

He sat down next to me and cut my pancake into baby bites, his blue eyes sparkling. Friends have accused me of living my life like the lead in a romantic comedy. This particular morning reinforced that accusation.

Hemingway fell to the side as I ate the spoon-fed pancakes the same way I was eating up his words. I failed to question the quality of them because at first bite -- and first listen -- they simply tasted too damn good.

The poems, the grand breakfast and his flawless delivery of it had me on cloud nine. I started to project into the future, when that one-off morning would surely become a morning I'd wake up to for the rest of my life.

It almost felt too good to be true.

Seeing as all of this was pretty much the most romantic thing anyone’s ever done for me, it seemed like a good time to initiate the “Are you seeing anyone else?” talk.

I decided to strategically pop the question in casual conversation. So that same night, as he was distracted while cooking me my favorite meal of curry on the stove, I dove in.

"Oliver*," I started. "I was just wondering...if you're seeing anyone else?"

As he looked up, he smiled his smile: a smile I loved so much that I wanted to marry it and make baby smiles with it. Little did I know I'd soon want to rip that smile off his face and boomerang it all the way to India.

A few nights after that enchanting morning, I was back at his apartment. An evening of imported wine and my favorite chocolates led to invigorating sex. He was really in the mood, and so was I.

But the more I found myself letting go physically, the more apprehension I felt mentally. As much as my heart (and vagina) wanted to believe every word he had said the other night in the kitchen, my gut insisted it was all too good to be true.

Oliver cocked his head to one side.

He looked me dead in the eye and said the words that would lead me to lock myself in my tiny apartment for two weeks straight and cry.

“Sheena, I’m really just not looking for anything serious right now. And I think you know that.”

We both lay there, head-to-toe naked. But of the two of us, in that moment, I was way more naked.

I was no longer in the mood. Neither was he. And just like that, the guy I thought I'd been dating turned out to be the guy I'd just been f*cking.

I felt conned. I felt naïve. I felt stupid because the thing is, there were red flags, and I purposely overlooked them.

Oliver made plans with me only when it was convenient for him. He distracted me from his emotional distance with fancy meals. He never spoke of the future, and he’d often disappear for days on end in between our dates.

I chalked it up to bad cell reception and a busy work schedule on his end, but deep down, I knew I was kidding myself.

As I lay there literally naked and rejected, I realized Oliver had never elaborated when I asked him about our relationship status. Suddenly, it was clear that "It’s just you” meant nothing more than “It’s just you I’m f*cking right now.”

I wanted to hear that he was my exclusive boyfriend, but all he really said was that I was currently his exclusive f*ck buddy.

I now know that a man who wanted to be with me would have told me what I meant to him in that very moment. But a man who just wanted to f*ck me would do what Oliver had done -- omit the information he knew I didn't want to hear. That omission is just as much a betrayal as flat-out lying.

Every word that left Oliver's mouth was a fluffy pancake bite slathered in syrup -- all embellishment and no nutrition.

My bed-in-breakfast morning ended up being nothing more than an illusion. True to my hopeless romantic nature, I made the mistake of continuing to sleep with him because I thought I could be the one to change him.

It would have been the perfect ending to the rom-com of my life.

But alas, he didn’t change; I only allowed myself to get more hurt.

The pivotal moment in my could-have-been relationship kept me coming back for more, when it should have been my warning to hit the road.

If you learn anything from my story, let it be this: When the guy you thought you were dating turns out to be just the guy you're f*cking, don't bother sticking around.

Unless you just really like the f*cking. Or the pancakes.