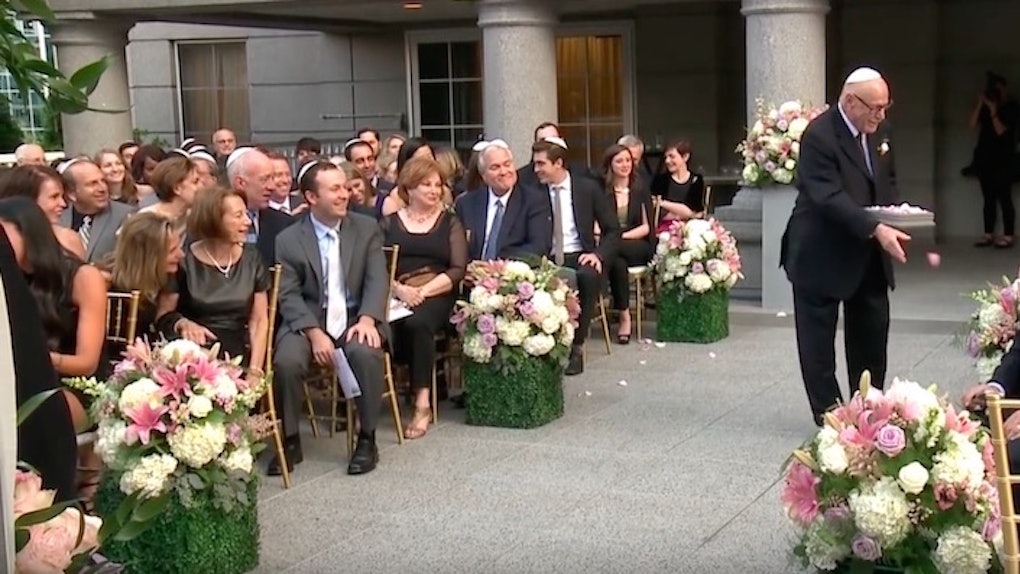 'Flower Grandpa' Is The Best Thing To Ever Happen To Weddings

GET READY TO HAVE YOUR HEART WARMED LIKE AN OOEY GOOEY CHOCOLATE CHIP COOKIE FRESH OUT OF THE OVEN.

Jen Briskin, 29, is very close to her 85-year-old grandpa, Stanley, so she wanted to include him in her wedding in a way that was original.

She told Country Living, "The idea of having him be a 'flower girl' started out as a joke, and I teased him that I was going to have him wear a tutu and patent leather shoes like a typical flower girl."

Stanley, in turn, would joke that a video of him as the flower grandpa would make him "go viral."

Their whole family thought it was just a crazy joke, but Jen wouldn't give up on the goofy idea.

"I wanted our wedding to be memorable and different without being cheesy, and I thought that this would be the perfect addition to our ceremony," she explained.

She formally asked her grandpa to be her "flower grandpa" with a cute embroidered handkerchief that read:

Papa, Will you be my flower grandpa? Love, Jen

That being said, Stanley was still a little nervous for his first gig as flower girl. But Jen knew exactly how to get her grandpa's head in the game, "We convinced him that if two-year-olds can be flower girls, he could do it too!"

Her grandpa accepted the challenge and took his roll very seriously.

Jen explained, "He insisted on practicing before the ceremony, so a few weeks before the wedding, my sister bought a bucket and fake leaves and they practiced by having him throw the leaves on the driveway."

Stanley, whose role as "flower grandpa" was kept as a surprise from all the guests, was the last to walk down the aisle before Jen and her parents... and the crowd (obviously) loved it.

As soon as he walked out, Jen explained to Country Living, she heard the crowd erupt into laughter. Despite his weeks of practice, Stanley was still unsure of what to do and wound up throwing the petals on their guests rather than down the aisle (as you can see for yourself in the hilarious/adorable/wonderful video of his walk).

Jen couldn't imagine her wedding being any better.

"It felt like our style to have all of our guests laughing right before we started our life as husband and wife."