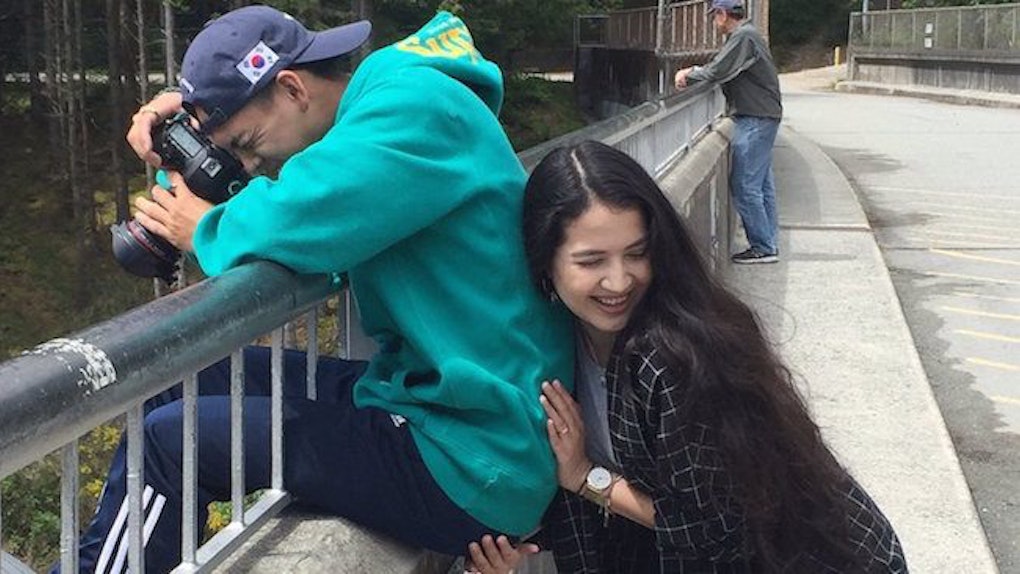 This Girl Helped Her Boyfriend Take The Perfect Instagram Pic

We all remember when Jay Z sealed the deal on his new title as "Instagram Husband."

Oh, you don't remember? Allow me to remind you.

Beyoncé added this little pic of herself, where you can see Jay diligently taking her picture in the background, and BOOM, he was officially crowned:

You see, much like our boy Jay Z, Lorena dates an artist.

OK, so her boyfriend isn't quite international royalty like Beyoncé... but he's a pretty talented photographer named Isaac Garcia.

Lorena and Isaac were on vacation together in British Columbia, Canada, and obviously, Isaac was doing his thing taking some dope pics.

When Isaac decided to snap his "classic sneaker photo" over the Cleveland Dam, Lorena decided to pull a page out of Hova's book and help her BAE get that perfect shot.

Lorena tells Elite Daily, "He wanted to take his classic sneaker photo, so he climbed up on the ledge while I held his other equipment."

A tourist saw the adorable couple doing their thing and even decided to take a picture for them.

And that's how the hilarious tweet came into existence.

Now, for all you haters shading Isaac for not having enough "core strength" to sit up on his own, Lorena has a message for you, too:

He was doing fine. A lot of people think I got behind him because he "lacked" core strength. But it was me who chose to give him a little push up. Just wanted to make sure he got all his angles!

All right, tell me these two aren't the cutest couple of all time.

This girl thinks its some certified "cute ass shit."

This girl knows it's a "dope ass shot."

This girl's trying to cop Lorena and Isaac's swag with her boyfriend.

This guy KNOWS they're goals.

Don't we all just want a love like this?

OK, now, time for my boyfriend and I to go on a vacation to the Cleveland Dam and for him to try to take an artsy picture that I can help him with, only for a couple of strangers to see and offer to take our picture!

Citations: People Are So Inspired By This Woman Who Did The Most To Help Her Boyfriend Get The Perfect Shot (BuzzFeed)