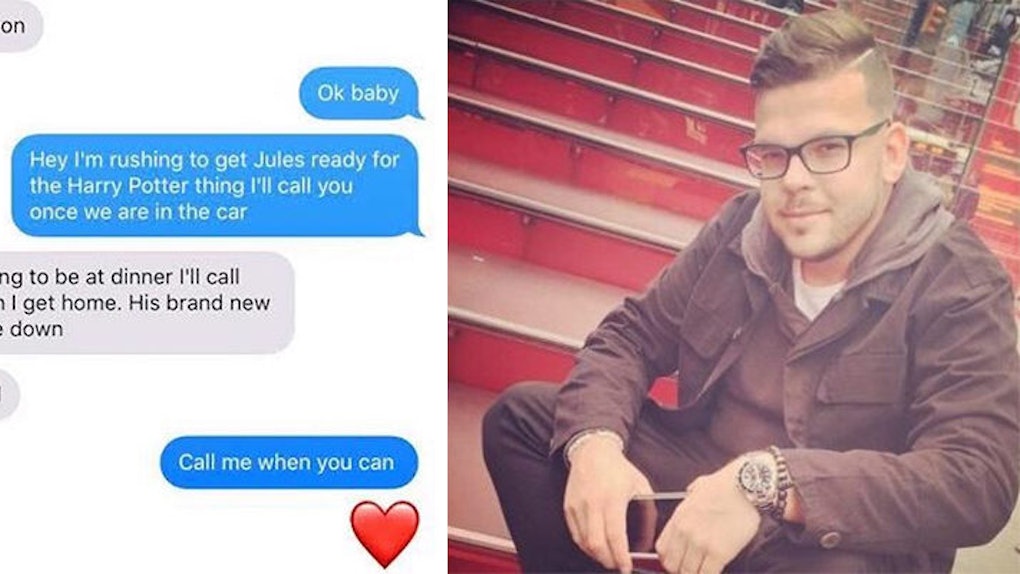 Girl Was Ghosted By BF When He Was Running From Cops

This week, we have Kelly* who was ghosted by her boyfriend four times… before she found out he was a criminal.

Kelly and Nic met in Las Vegas when they were working together at a convention for a couple of weeks.

She wrote him off as a gross player who was well out of her league physically, but about six months later, he texted her out of the blue.

She kept her guard up high and resisted the temptation, but he was persistent. Finally, he managed to wear her down.

And then, he ghosted her off and on for the next four years.

After letting him convince me he was a good guy, I let my guard down too far. I liked him... a lot. I told him my secrets, my dreams, my insecurities and my greatest fear — fear of abandonment (which came with a lengthy tale from my early teen years involving myself losing my first love/best friend to cancer and how I had spent my entire life after that feeling like he abandoned me and emotionally damaged). Months passed; Nic was wonderful. I got comfortable, too comfortable, so much that when he suddenly stopped talking to me for a few days and ended up leaving Vegas and going to Orlando, I missed the huge red flags there.

He didn't tell me he was going; he just disappeared. But he smoothed it over with a sad story of his grandmother who was suddenly battling cancer (coincidence that this happens to be a sensitive subject for me? Looking back, I'd say no). A couple of weeks pass of Nic telling me that his grandma's health is deteriorating, that he misses me and wants to get back to see me. My heart broke every time I'd hear his voice on the phone, as he sometimes cried about being scared about his grandma's cancer. And then one day, he was just gone. We pretty much had been texting or on the phone around the clock since he popped back up after skipping town to Orlando. No texts, no calls, nothing. He knew my biggest fear. Was he really doing it to me after claiming to care about me, after spending so much time breaking down my walls and getting me to let him in? Turns out he absolutely was.

Months passed. I eventually started to let it go, and just as I felt like finally was over it, Nic decided he had not damaged me enough. He decided to pop his pretty, little self back in my life, telling me the story about the loss of his grandmother to cancer and how it caused him to just recluse for a while, but he missed me and he felt awful for hurting me. So he was back to make it up to me. For some strange reason, I never got a clear answer on why he had not returned to Vegas and was still in Orlando. I tried to keep my emotions in check. I kept Nic at a distance, which was good because it was only a bee sting when he disappeared on me this second time compared to the pain he had caused the first [time]. I wish I could say my story with Nic ended there. I wish I could say I learned my lesson, stopped being so naive and hardened my heart over what at this point, had been more like a haunting than a ghosting. But my emotional nightmare with Nic was not over yet...

It had been about eight months since the last ghosting. There had been no word from him until March 12. I was checking Snapchat when my heart stopped to see his user name in my snaps. He kept it short, but knew just the right words to use to get back into my head. 'Why can I not let you go? I miss you. I feel like I need you. I just keep fucking things up. I'm so sorry, Kelly.' I stared at the screen knowing it would be best for my emotional well being not to answer, but again, I failed. I replied,  'I miss you too.' Immediately, he replied back, 'Please call me, I need to hear you say it.' Unfortunately, I did.

I cried listening to the 'sincere' and 'heartfelt' words of his apology and his begging me to forgive him yet again. I stupidly believed his every word when he promised he wouldn't hurt me again, and even worse, I even agreed to keep talking to him even after finding out he was STILL in Orlando and now had a girlfriend. He confided in me that he was stuck with her because they had gotten an apartment, but she was crazy and controlling, monitoring his every move and cutting him off from everyone but her.

We were on an almost four-month streak of talking almost all day long, every day, when I told Nic I'd be going to [North Carolina] for my sister's wedding on June 18. He asked if he could meet me there for a mini-getaway. He would fake a business trip (because of the girlfriend), then drive on to Wilmington, NC where he was renting an Airbnb for a few days for us. He promised me a romantic four days of Kelly and Nic tangled naked in sheets, more kisses than I could imagine, nice dinners and sand between our toes. Days leading up to the trip, he sent me photos of the place he had reserved along with his travel timeline and ETA for getting to me. The morning before, he asked me if I minded picking up snacks, wine and beach chairs.

All day long the day prior, I spent time prepping. I rented a car, bought groceries and even tried crafting a DIY movie night blanket thing I saw online. I mean, if Nic was driving nine hours and spending over $700 on the house, plus his gas and our food, then the least I could do was try to make it fun and romantic too... right?

After everything he had put me through, I should have played it safe. But I didn't. We texted all day making plans and such, and then, suddenly, the replies stopped coming. My heart sank. There was no way he was doing this to me again, right? Wrong. The next day, after texting him, I hear from his girlfriend. She tells me I'm insane for thinking he cared about me and that he wasn't coming. To top it off, the sick grandma with cancer who died — it was all a lie. His girlfriend reveals to me that she was still totally alive and fine. Suddenly, my number was blocked from calling him and all social media was cut off and blocked, too. He did. He did it to me again. I sobbed uncontrollably for hours. How could I let this happen again? How could he do it his to me again? I wish I could say this was the end, but it wasn't.

What happened next? September happened. He sent an Instagram DM, 'I messaged you as soon as I could. Becca* is finally gone. It's finally over. She moved to New York and I couldn't stand being without you.' The message was followed by an immediate phone call that begged for forgiveness, explained to me all of Becca's craziness and foolishly, I fell for it. We spent the next few months falling back in love via text, FaceTime, Snapchat and phone calls. He was still in Florida, but we decided to give this a real shot this time. No girlfriends, no lies. The connection was stronger than ever, and we decided it was time after almost four years to see each other in person again, as a couple. We made flight arrangements for the first week of December. I expressed to him I was scared I'd be stood up at the Orlando airport; he assured me things were different.

And sure enough, he was there. He showed up; my heart stopped; it was real. So much time had passed since I saw him in person, so many lies and let downs had happened, but he was there. The week was amazing. At one point, we were sitting on the couch and he looked over at me, grabbed my face, turned it to him and said, 'Look at me, kitten, I will never hurt you again. Please trust me. I love you.' That was the point where my walls really crumbled. I did trust him because I loved him, too. The last night I was in town, he cooked me dinner, we went and kicked ass at an Escape Room, came home and I kicked his ass at 'Call of Duty,' binge-watched 'The Walking Dead,' showered together, then spent hours in bed until 7 am before we finally collapsed into each other and fell asleep. When we woke up, he told me that the prior day, start to finish, had been the best day of his entire life. We started planning our next time to see each other and vowed to see each other once a month. Later, the goodbyes were painful. I officially had my full heart in him. I loved him. I was terrified of missing him, and I was fully trusting him. I got home Tuesday. Things were fine. The texts and calls from him were flowing; he was constantly telling me he missed and loved me.

Then, three days after I got home, it happened. The final ghosting that would completely damage my already fragile heart. Friday morning, things were fine. He called; we talked about normal things. The rest of the afternoon we texted, then at 4:30, I get this.

At 10 pm, he still had not called, which was 1 am for him. I decided to call him. He answered. I heard a lot of background noise, and he said, 'I'm not done with dinner, I'll call you later.' There was a weird shuffle noise, and then, he hung up on me. It felt shady, so I called right back and it rang once then went to voicemail. I knew immediately what this meant — blocked. He blocked my number. He broke my trust and my heart worse than I could ever have imagined.

It's been two weeks yesterday, and my heart still aches. I've cried every day — some days little tears, others full-on sobbing. Sadly, I would still call his phone several times a day even though I'm blocked. I just wanted answers, even if it's mean, I don't care. I need closure. Just a few days ago, a simple Google search finally gave me the closure I needed.

The reason he bailed on me the first time four years ago when he moved away to Florida and made up the lie about his grandma was because he is wanted! He can't come back to Vegas without being arrested! He is under the current warrants for arrest here for identity theft and then stealing under the stolen identity! Oh! And he currently has Tinder... so Orlando ladies should watch out.

Is this not the most INSANE "Boom, Ghosted" you have ever read?!

Honestly, beyond "Boom, Ghosted," is this not the most insane story you've ever read... just, like, in general?!

Obviously, my natural inclination is to judge Kelly a little bit for going back to him so many times. But then again, how many of us have gone back to guys we KNOW we shouldn't go back to? Love makes us all dumb.

But what do you guys make of all this? I MUST know your thoughts. Let's process this all together.