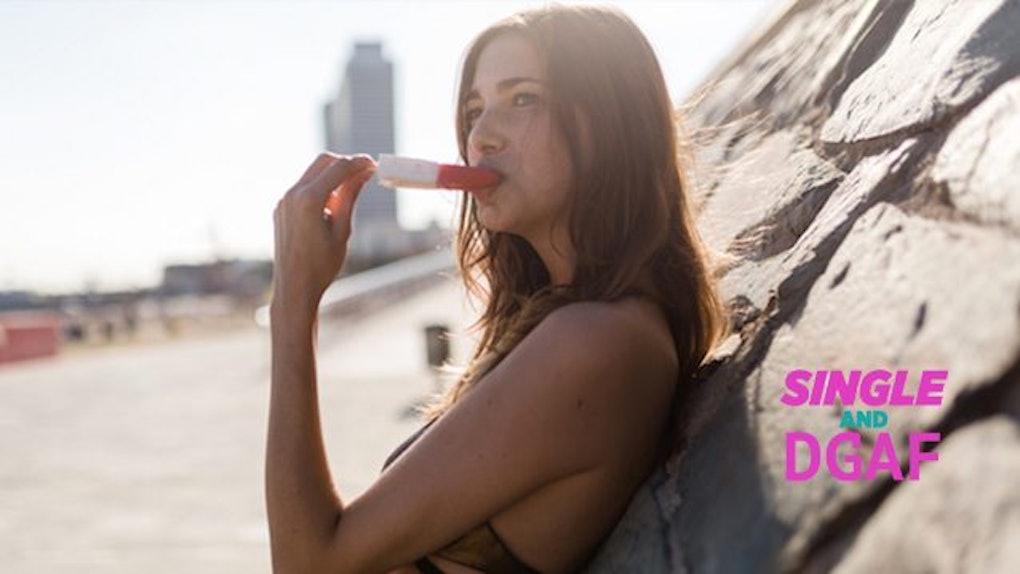 Girl Gave A Blow Job To 'Gain Power Back'

This week we have Daniella* who used a blow job to even the playing field with a guy she liked:

My dating life took an (unfortunate) turn around March when I met a guy (let's call him Boy A) who I would ACTUALLY fall for. Hard. Three-and-a-half years of being single in college all went to shit at the very end of senior year.

Anyway, there would be some nights where he would act kind of weird around me (what girl hasn't had this problem?), and I hated that I would get upset and it would ruin my nights out, especially at the end of the year when I was trying to have fun! The final straw was one week at the end of April: that Tuesday night, we had been out at the same bar, but he had kept his distance from me. I was upset, mostly because of the fact that I was letting this person affect my happiness. So, this night took place in the final weeks of senior year. It was a Thursday.

Before we headed out, I sent a couple snaps from the pregame to Boy A, but I never gave him any indication that I was not going to be at the same bar as everyone else, nor did I text him seeing what he was doing.

When we got to the bar, I was essentially on the "prowl," seeing if anyone caught my eye.

When we got to the bar, I was essentially on the "prowl," seeing if anyone caught my eye.

Lo and behold, ~fate~ helped a girl out and I ran into a guy I knew (let's call him Boy B)! I knew Boy B, ironically enough, through a guy I hooked up with a couple of times before I met Boy A. To make it even more perfect, he went to a different school, so there would be no way Boy A would ever find out about what was to come. Boy B and I chatted for a little, but I was also there to have fun with my friends.

Boy B and I stuck with our own friends for most of the night, occasionally walking by each other to say hey.

12 am: Night's winding down

When the end of the night approached, my friends urged me to go after Boy B. So while my friends got their coats and called an Uber, I went up to Boy B.

However, I started to have second thoughts (after all, I really did like Boy A), so I just got his number and headed out with my friends.

As we were heading out (literally out the door to the Uber), one of my best friends turned to me and said, "No, you should get after it! He was into you. This is perfect." She essentially gave me a motivational pep talk to bring this guy home. Feeling inspired and six vodka sodas deep, I ran back inside and found Boy B, told him to get in the Uber and come home with me. He did.

Feeling inspired and six vodka sodas deep, I ran back inside and found him, told him to get in the Uber and come home with me. He did.

Back in my room, we made out on my bed for a while and things started to get heated. Unfortunately, drunk me had a bit of a "conscience," so I did what anyone else would do and just gave him a blow job. While blowing him, I actually felt empowered. Blow jobs can be so empowering in the sense that you are controlling the guy's pleasure, and this guy definitely enjoyed himself, which made it all the better for me.

I also wondered, "Hmm, wonder what Boy A is up to right now" while I was giving said blow job.

After we finished our fun and Boy B was getting himself comfortable to stay the night in my bed, I went over to check my phone. Of course, Boy A not seeing me, and me somewhat ignoring him that night, led him to send me several texts. I decide to respond in the morning.

I drafted up an excuse around 9:35 am. [caption id="attachment_1820874" align="aligncenter" width="717"]Anonymous[/caption] (For context, when he texted me for that "first time," he was saying it was actually one of his girl friends who did it. Solid.)

Even though I never ended up seeing Boy B again, ultimately I gained a little bit more confidence in myself that night and I truly felt like I gained some "power" for myself to know and hold on to.

I truly felt like I gained some "power" for myself to know and hold on to.

Boy A and I hooked up for a little longer after that, but I never let it slip that I had hooked up with someone else. Now, a couple years later, we are still in touch as friends. I actually admitted this story to him a couple of weeks ago and we had a good laugh about it.

I love this story. Wanna know why? Because everyone wins.

Boy A realized why he liked her in the first place, Daniella got to get a little confidence booster and Boy B got to get a blowie.

Not all stories have happy endings, but as far as I'm concerned, this one does.

What do you guys think? Comment your responses below!