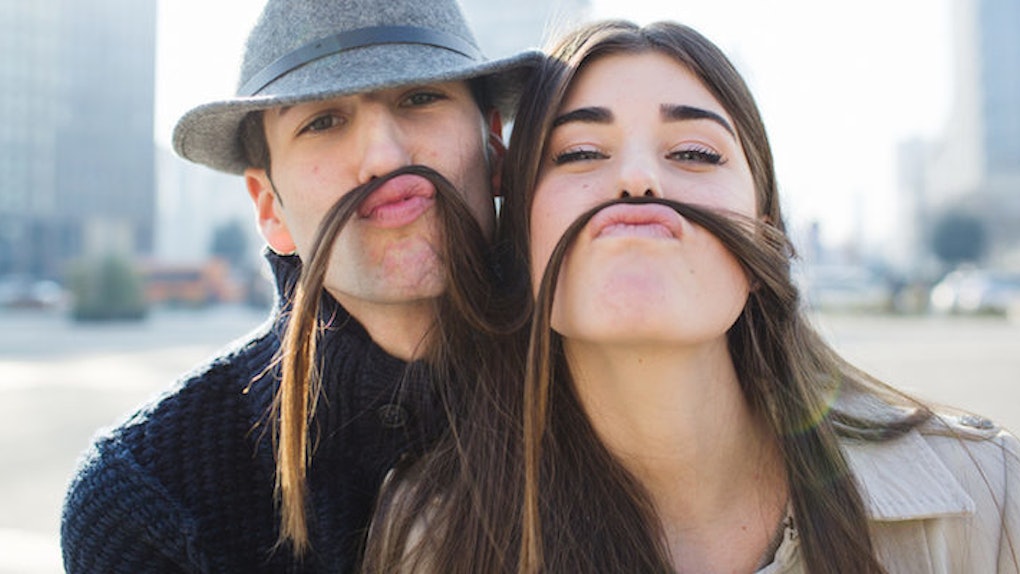 Are you dating someone utterly out of his or her mind? Do you find yourself thinking about how crazy and "all over the place" your significant other is?

Do you find yourself describing your girlfriend as weird or your boyfriend as absolutely insane?

Well, you don't even know how lucky you are.

If you've found someone brave enough to be him or herself in this world of standardized proportions and fixed ideals, adore that person.

If you've found someone strong enough to hold on to his or her childlike sense of wonder, to be completely and utterly free and uninhibited, cherish that person.

If you've found someone liberated enough to be a complete and utter weirdo, never let that person go.

He or she will be like no one you've ever been with before, a breath of fresh air mixed with an electric pulse that shocks you into another dimension.

They're magnetic, attracting and pulling you into them while at the same time, pulling you backwards, throwing things at you you're not always ready for.

They'll piss you off while at the same time show you something you can't live without -- their world.

Their world of wonder and awe, the way they see things you didn't notice before, look at things you never understood and question everything you thought you knew.

They'll change your whole life without thinking twice about it.

If you're lucky enough to be with someone crazy enough to let you into his or her weird world, cherish him or her and make sure never to let that person go.

Because relationships with weirdos are always better than with anyone who's trying to be "normal."

The weirdo will never let the fight be the same one.

Weirdos have feelings and opinions that will clash with yours like any significant other.

With them, however, it's never about the same sh*t.

Because your relationship isn't the same sh*t. It's new things, new tastes and definitely new points of view.

The weirdo will never expect the relationship to be a certain way.

They don't have expectations of you or the relationship. Weirdos let the relationship coast the same way they coast through life -- hoping for the best and going with the flow.

They don't go into things with preconceived notions because for them, a relationship is as random and unknown as life.

The weirdo will introduce you to the freak inside you.

You think you know yourself, and then you meet someone who challenges every part of your being.

Weirdos make you rethink your life, your passions and what the hell you've been doing this whole time. You go from who you were to who you could be.

The weirdo will never be replaced.

You know you can't let them go because everyone after them will never live up to the force your weirdo entered your life with.

Everyone will just make you wish you were with your weirdo again.

The weirdo will never question when you need to take time for your own adventure.

Not only do weirdos support your personal endeavors, they push them. They don't just want to be there for you; they want to show you the way.

The weirdo will make you forget about the outside world.

Until you've met a weirdo, you've never understood the only world you need to judge yourself by is the world you create for yourself.

You also never experienced what it's like to live in your own world, to never have to enter society again. Weirdos bring the only world worth caring about into yours.

The weirdo will catalyze every single creative interest you have.

Any weird, obscure or crazy notion you pondered then let go of is now thrown back into your face. It's molded and nurtured and praised.

Those tiny thoughts you never gave any light to are suddenly magnified and urged to be chased and expanded.

Those tiny dreams you never let yourself think about are all a weirdo wants to talk about.

The weirdo will never make you feel weird about your own weird self.

They want you to be weird. They long for you to open up that side you refuse to show the world.

They're ready to explore your inner workings and most obscure neuroses.

They'll thrive on your quirks and your idiosyncrasies... just make sure you don't hide anything.

The weirdo is always worth the drama.

Yea, weirdos are not always the easiest people to deal with, but they're always worth it.

They're going to bring with them drama and intensity, but that's what's going to make your life worthwhile again.

Those days when you were just going to work, the gym and going to bed will seem like a fate worse than death after finding someone who won't let you be bored ever again.

The weirdo will teach you to laugh everything off.

They'll show you what it's like to not take anything seriously, including yourself.

Life is too short and too weird to judge anything, and if you can't get serious about it, you may as well laugh about it.

Embrace those who know how to embrace the moments that shouldn't be anything but funny.

The weirdo is going to be the best sex you've ever had.

Weirdos are uninhibited, and their sex follows suit. They aren't nervous or scared; they're down to try anything.

They want their lives between the sheets to be as spontaneous and crazy as the one outside.

They're not scared to show their true, naked selves.