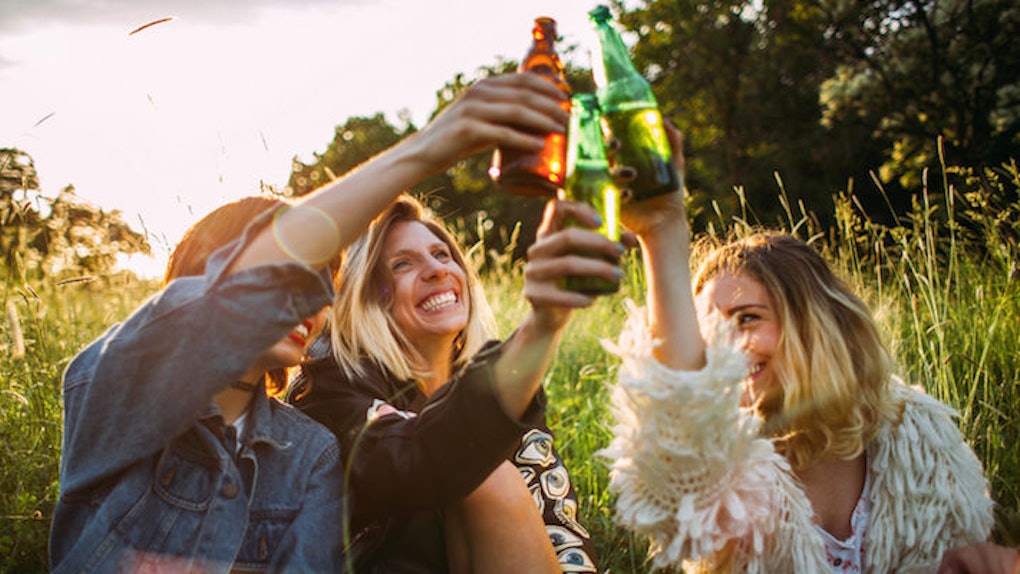 If You Don't Let Me Get F*cked Up And Do Weird Sh*t, I Can't Date You

I love to get f*cked up and do weird sh*t.

And I mean really, really weird sh*t. Like convincing the DJ at the bar to play a song that makes people throw their hands up in the air so that I can run around tickling strangers. Or showing up to an all-white party dressed in a lion suit...and to a U2 concert dressed as Bono.

Ever since I had my first sip of raspberry Smirnoff before a “tropic like it's hot” dance party in my junior year of high school, I have had a love affair with epic nights on the town.

Another time, I took a dare from my friends to massage random strangers at a bar. I told them that this was my “final for massage school.”

The list goes on. There's just something about tossing back a few too many Moscow Mules and hopping onstage at a concert to do the funky chicken dance that GETS ME GOING.

Honestly, I don't even really care about the booze. I would do 99 percent of this sh*t sober. I love going out with my friends and not knowing where the night will take us. It's how we bond.

And all this is well and good when I'm single.

But it becomes an issue when I'm seeing someone. I once went out with my best friend in jeans and running shoes. Despite looking like absolute dweebuses, we managed to get “bottle service” (I use there term loosely, since it was basically a table they strung makeshift ropes around) at the bar. It was awesome.

Obviously, I HAD to tell the guy I was seeing all about it the next day. But instead of rejoicing in our triumph, he just laughed condescendingly and asked when this sh*t was going to stop being funny to me.

It's not that I can't find men who want to date me. But the men I date seem to think my behavior will disappear once I get with them. As if when we decide to quit sleeping with other people, then BAM -- the weirdo part of me will vanish, leaving only the boring stuff, like my hot body and my fantastic personality.

A lot of people worry about losing their identities and independence when getting into a relationship. For me, a big part of that just happens to be the bizarre sh*t I love to do while under the influence.

I don't want to be part of the couple that stops being fun. I don't want my big Friday night plan to be a movie night in bed. I definitely don't ever want to stop having my girls' nights.

If I had a penny for every time a guy said, “But why do you want to go out when you can stay in bed with meeee?” I would definitely have at least a few pennies (I don't get around that much).

I understand why they're upset. The accepted wisdom is that people go out on the weekends to find potential romantic partners. When they get into a relationship, the desire to go out is supposed to slowly subside.

If your partner is itching to go out all the time, you start to wonder if he or she is looking for someone else. Especially if you, um, maybe met him at a bar in the first place.

But going out when I'm in a relationship has nothing to do with meeting people or hooking up. If I love you, it doesn't matter if I'm drunk or sober -- I lose all interest in anyone else.

But I also love my friends like a freak. For me, going out and getting drunk is always going to be about spending time with them and making the bizarre stories we're going to tell for decades.

If the person I'm dating doesn't support that, then he really doesn't like the real me.

I don't need the guy I'm with to be sitting on the bar stool next to me. Of course, a partner in crime would be great, but all I really need is for the person I love to accept me for who I am -- a girl who goes out on a Friday night and accidentally picks a guy's nose (it's a long story, and I'm a little hungover right now).

I don't want a boyfriend who treats my personality like a “phase” I'm going through until he wifes me up. I want him to love and respect me for who I am, not in spite of it.

I just don't see why love should ever stand in the way of a good time. Which is why you'll probably find me at the bar this Friday body-slamming people in a sumo suit... and hoping to find the guy who thinks that's f*cking awesome.