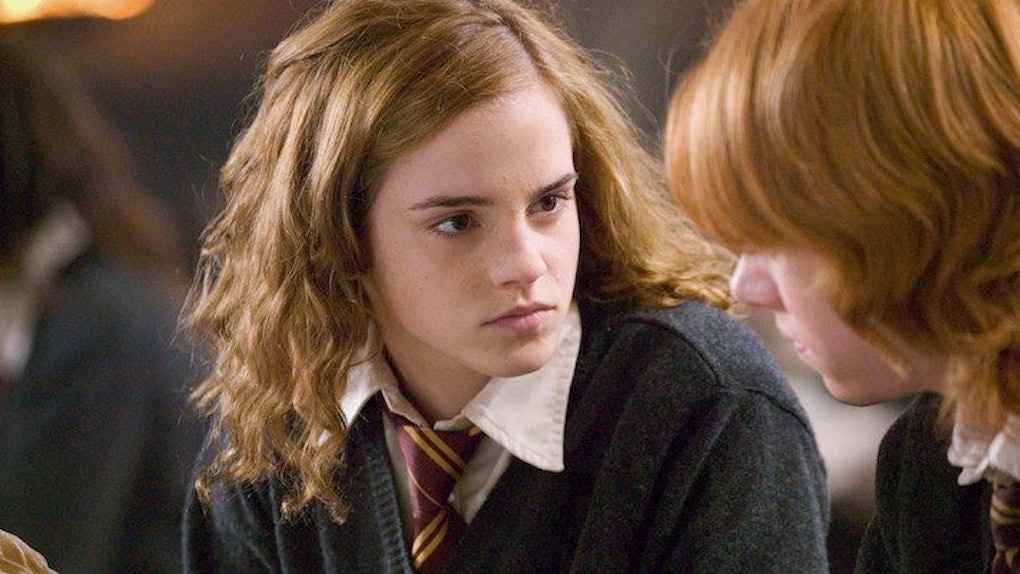 Why Falling In Love Is Like A Real-Life Horcrux

I've been a Harry Potter fan for as long as the books have existed.

I can still remember my fourth grade teacher reading "The Sorcerer's Stone" aloud to us as we sat on the floor, attentively waiting to hear what would happen to Harry.

Like many of us, I literally grew up with Harry Potter, aging as he did, navigating my little teenage life through the wizarding world.

My 18th birthday was the day "Deathly Hallows" came out, and yes, I pre-ordered it and spent my entire birthday in bed, ignoring my friends at the beach, so I could finish the book in hours. It was also the day I got my fake ID to get into bars, so it was a weird bridge between adulthood and childhood.

Anyhow, as I grew older and the movies eclipsed the novels (for the record, I'm in the books-are-better club), my love for Harry turned into real-life, heartbreakingly beautiful young love. I've loved, lost, gotten my heart broken and broken my fair share of hearts as well.

It's all part of the journey to where I am now, and I'm sure it'll be much of the same for years to come. It was only after a series of romantic adventures and the two-part "Deathly Hallows" film, however, that a lightbulb went off. Falling in love, for me, was like creating my own Horcruxes.

OK, so let me start off with a disclaimer: I realize Horcruxes are the darkest magic and only created by the darkest, most evil wizards, most notably You-Know-Who. I in no way believe that love is a dark or even remotely bad force. Or that it's only something that happens to bad people? That would be ridiculous.

I absolutely love love and wholeheartedly believe in its ability to bring out the best in people. Whether eros, philia, storge or agape, real, genuine love is something amazing. But I do know love can be mistaken or misused, egos get in the way and it's often turned into something else that rears its ugly head.

That being said, let me get started on my theory.

This is the most obvious bit for me. Every time I fall in love with someone, I feel like we almost merge souls. There's a reason people call it finding your “soulmate." It may be cheesy, but I think there's definitely an element of a connection that deep that breeds a shared self. Whether it's something as routine as ending up on the same schedule or the weird phenomenon that long-term couples seem to look alike, I can't deny the fact that love is some kind of merger.

And for me, that means leaving some piece of my soul with them. If the relationship comes to an end, that piece of my soul is out there somewhere in the world, much like Rowena Ravenclaw's Diadem.

Nagini was Voldemort's closest (only) companion and always by his side. Yes, you can argue that it was to keep a piece of his soul safe, but I imagine you could make that same argument about someone you love. Who doesn't want to fiercely protect the object of their affection simply because they love them?

Nagini actively fought for Voldemort while he regained strength, partly because of the shared soul thing. Which takes me back to point number one. Even Harry, who despised Voldemort, could speak Parseltongue, hear his thoughts and see the world through Nagini's eyes.

You can't get the Horcrux bond out of your head when you no longer want it.

Um, hello, does anyone remember the torturous occlumency lessons conducted by Professor Snape? Despite everyone's warnings to ignore the thoughts, Harry just couldn't keep Voldemort out of his head. So much that, despite his better judgement, Harry was tricked into imagining an attack that led him to do something reckless. And we all know how that ends. (RIP, Sirius. You're still my favorite character.)

I can't tell you how many times I've wanted to not think about someone I loved because of a break up, but damnit if my efforts weren't fruitless. I've even done some pretty reckless things in the name of love because, well, the effect of splitting a part of myself off takes quite a toll.

Horcruxes are things of immense value.

Aware of this fact, Voldemort looked for something from each of the four founders of the Hogwarts' houses to place his soul inside. We've already argued for Nagini's value. Tom Riddle's diary is the keeper of all his young desires. Marvolo Gaunt's ring was an heirloom passed down through generations of purebloods.

And Harry is obviously Harry freaking Potter, but he only became a Horcrux through an act of powerful love, which is, ironically, what we're discussing. Love, as exhibited by Lily Potter, is incredibly valuable, as are the relationships in which love is shared.

The more Horcruxes you create, the less “you” you become.

To be honest, every time I've fallen in love, it's made me a stronger, better person. I've loved some truly incredible people and learned so much from each experience. But maybe it's due in part to them giving a piece of themselves to me. As I'm creating a Horcrux, so are they, and we simultaneously lose a part of ourselves but gain something new. I can say, however, that the more times I get my heart broken, the stronger the walls I put up become. I feel weaker inside and therefore more resistant to that pain. Each heartbreak is exactly that. It can break you, but sometimes that's so more light can shine in.

The people I've loved have been true gems, and just because it didn't work out doesn't mean it hasn't helped me grow. It's helped my let go of my egotistical sense of self.

Change is scary, but allowing yourself to adapt the good qualities, accept the things you can't change and discard what is no longer serving you can be change for the better. As for me, I'm learning to welcome these changes, keep my Horcruxes close and grow stronger for all of the love I receive.