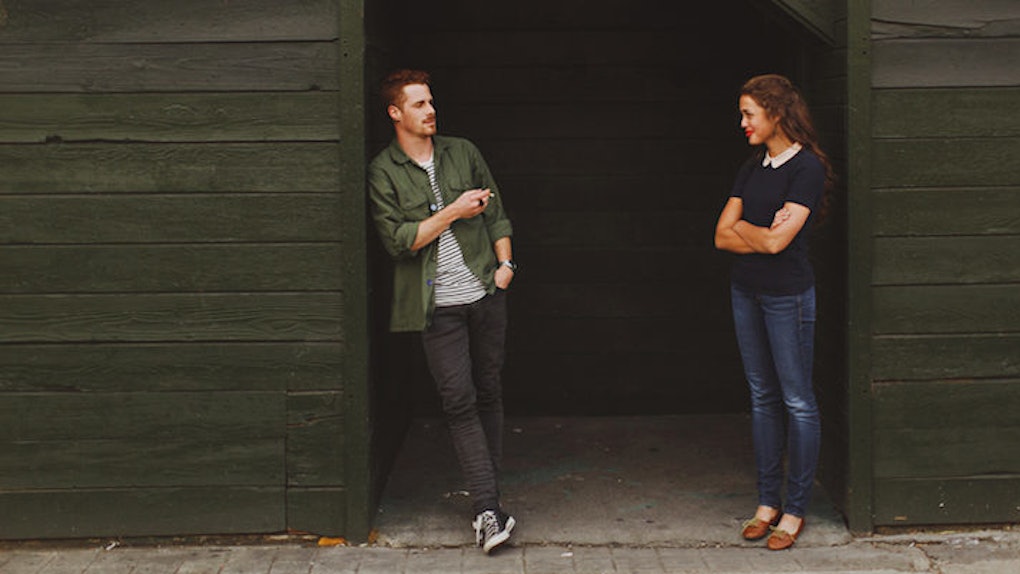 I truly believe people come into our lives for a reason. He didn't come into my life so I could check "get the hot guy at work to ask me out” off my to-do list. He came into my life to teach me a lesson I needed if I ever wanted to be happy.

He was hot, and so I was instantly intrigued. When he first got hired at my work, I made it my personal goal to get him to ask me out.

I normally don't date co-workers -- it's just best to avoid that kind of awkward situation. But this time, I made an exception. At the end of the month I was moving, so if things didn't work out, I wouldn't have to worry about any weird encounters at work for long.

As he walked past my desk one day, I stopped him and introduced myself. I asked for his information, claiming I needed to put it into the company's system, and sparked up a conversation from there. So smooth of me, I know.

We went to dinner and a movie, and things quickly snowballed from there.

We casually dated the whole month before I left. We would see movies, take random trips to IKEA, drive all over the valley and go ice-skating. Despite a few flaws, the relationship was good.

However, my family didn't like him. They had only met him a couple times and they had no real reason to dislike him -- they just did.

One thing my family didn't realize was how important this “drip," as my dad called him, was to me. Sure, maybe he wasn't the best guy for me and I wasn't the best girl for him, but he taught me something that I will never forget.

He changed my life with one sentence and for that, I am forever grateful for him.

One night, we were on his bed watching "Hawaii-Five-O." As we sat there quietly watching the show, he turned to me and started asking me questions about the way I lived my life. I was hesitant to answer.

The past few months had been a living hell. I had just moved home from school and was struggling emotionally, physically, mentally and spiritually.

The truth was, that month had been the darkest month of my life. I was hiding what I really wanted and living my life in secret to avoid my religious family's disapproval.

My life was one big lie, and I was looking for an out. I needed a way to leave my childhood home and start over. I tried to string words together, but they weren't coming out in a logical order.

After a few minutes of word vomit, he stopped me.

He seemed concerned. Before I could muster up another bullshit answer, he paused the show, turned to me and said,

I want you to do things because you want to, not because other people want you to.

I was floored. I had no idea how to respond to that kind of statement, and I was touched that he actually cared about what I wanted.

He had a different perspective on life than those surrounding me. My parents and friends are all the same religion, and all believe in the same principles. All of them encouraged me daily to be gung-ho about living the same life that they did.

But I wasn't. I wasn't happy. I liked certain aspects of how they lived, but I wanted to be a bit more open-minded. I did not want to live my life for someone else, I wanted to live it for me. And that was exactly what he was encouraging me to do.

After I moved away and we stopped talking, his piece of advice stayed with me. I think about it every time my family and friends ask me to do something or want something from me.

It may sound selfish, but I think of myself. I think back to that cold December night when my life was going in a direction that I did not like and he redirected me. I now take a moment to think about what I want and where I want my life to go.

For 19 years, I had lived my life for other people, trying to make them happy. Now, I put myself first, regardless of how it makes others feel.

Sometimes my family thinks I'm damned, yes, but other times they think I am inspiring. Putting myself first ended up being the right decision.

Over the course of the last year, my life has taken a turn for the better. I'm so much happier. And it's all thanks to him.