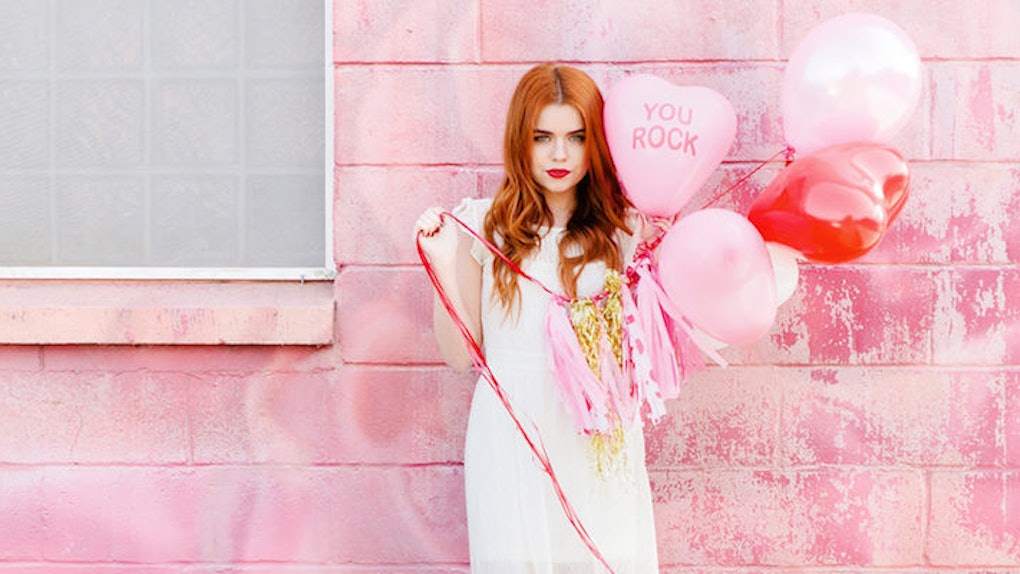 It has nothing to do with being in love or being single.

I've been in a relationship on Valentine's Day, and I've been alone.

Both suck equally as much.

For years, my friends have called me the Grinch of Valentine's Day, and I'm totally okay with that.

How could anyone love this holiday (anyone besides Hallmark, that is)?

It's stupid, it's annoying, it's enraging and it just doesn't make any sense.

Here are 14 things I loathe about Valentine's Day:

Is there anything more clichéd than a dozen long stem roses being delivered to you, especially to your office?

They're such a pain in the ass to lug home, and roses are so unoriginal.

If you want to be romantic, try sending me a dozen tiger lilies on March 18.

It's random, and that's the point.

Clearly you weren't paying attention when I told you a little over a month ago that my New Year's resolution was going to consist of heathy eating.

Why are you trying to sabotage my waistline?

Do you not understand that summer is four months away?

You know I have no will power, and now you're just being rude.

You made me get all dressed up to go out and be surrounded by same side sitters making out.

This is not romantic; it's making me nauseous.

I was really okay with pizza since you already ruined my diet.

You can't be all sweet and darling today and go back to being an assh*le tomorrow.

Stop pretending you're some suave, considerate human being.

Why do you hate me? You know I'm a klutz.

I appreciate you taking the time to light 500 candles, but I also hope you upped your renter's insurance.

Because after a few glasses of wine, this is not going to end well.

Face it: If it wasn't advertised on television for the past three weeks, you wouldn't have even remembered Valentine's Day.

You can't even remember to put the seat down!

Stop acting like you've been planning this for weeks. You haven't.

This doesn't make up for what you did last week.

A dozen roses doesn't solve anything.

If you really want to be romantic, try to stop doing the ridiculous things that piss me off on a daily basis.

Or at least pick up your dirty underpants off the floor.

I'm not f*cking wearing that sh*t.

It's uncomfortable. I can't even figure out how you put the damn thing on.

Also, I'm now fat again because you force-fed me chocolate.

Come on, it's just going to come off anyway.

Plus, red is not my color. I'm not a Victoria's Secret Angel.

Please don't make me feel pressured to put on this stupid getup because it's "romantic."

The next day is filled with the "What did he get you for Valentine's Day?" question.

Oh, your boyfriend bought you an ugly heart-shaped necklace from Kay Jewelers?

Is he booking a flash mob for your proposal, too?

Let's be real: Our idea of romantic is having tater tots and beer on the couch while watching "Rush Hour 2."

Why are we going to ruin this?

Can't we just watch a movie pantless together at home with our tots?

I just can't take it anymore.

I don't care about you spilling your heart out all over the place because of stupid Valentine's Day.

I'm so happy you have a valentine, but take your hashtag and shove it.

The only things I like that are pink and red are Starbursts.

Why do you love me so much more today than any other day of the year?

Does that little brat in a diaper really come down and shoot you?

Is there an arrow sticking out of your ass?

Also, how come you tell me I'm beautiful today, but never any other time?

Speaking of that little rat bastard, love hurts enough as it is.

You want me to embrace being shot in the ass by some kid going through his terrible twos?

I have nothing against the actual saint, but if I had to guess, a grown man would not be pleased with his legacy being represented by a flying kid in a sh*tty diaper.

Damn you, Valentine's Day. Damn you.