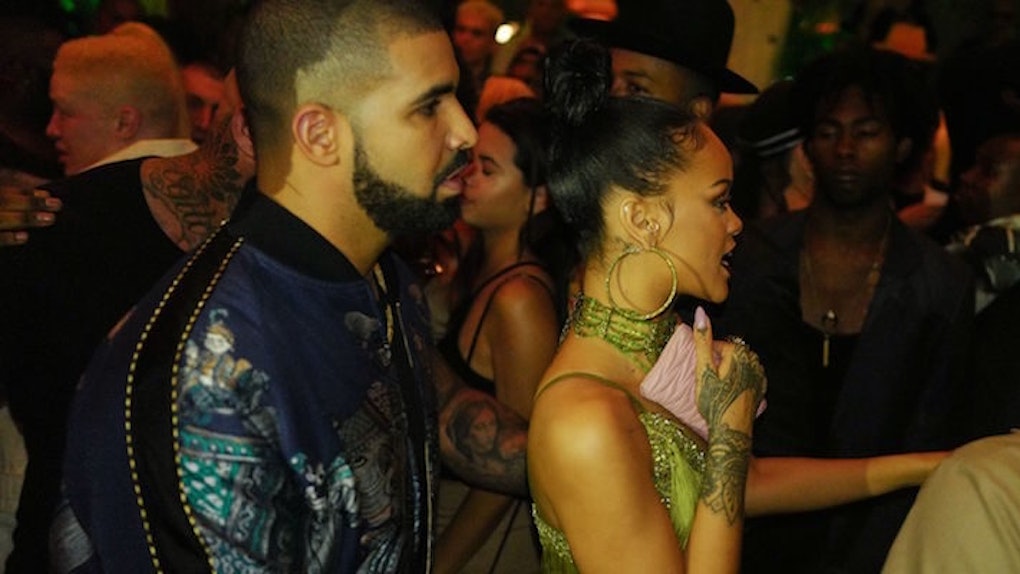 This Sunday, I found myself in my cotton, pink-striped pajamas cuddled up in my full-sized bed, sheets pulled up to my chin, breathlessly taking in the incredible, mind-blowing spectacle that was the 2016 VMAs.

Maybe you should join the pop culture conversation more often, I thought to myself, blown away by the performances of reigning Queen Bey, and my favorite girls, Rihanna and Halsey. (She low-key killed it.)

I become notoriously emotional during any sort of lifetime achievement award speech. So when Drake (I'm a lesbian, but I would officially go #StraightForDrake) presented Rihanna with the "Michael Jackson Video Vanguard Award," I was crying mascara tears before he even started speaking.

Girl, the way he stood — so calm and so still, his feet so rooted into the stage — was already extremely powerful and deeply moving to me. I'm a firm believer that while lips can seamlessly lie, the body cannot.

Our boy Drake was grounded in his fucking truth, babes. He wasn't shaky and sweet-talking, and he wasn't blowing smoke up Rihanna's ass (which, I'm sure, happens to her daily). Nah, he was authentic.

Never once did Drake pepper in his own success story, like egocentric male artists tend to do when they're reminding us they're also stars, in case we momentarily forgot.

Our gentleman left his ego on the streets of Manhattan and made his speech all about the lady of honor. He spoke about the magnitude of her incredible talent, her impressive commercial success, but also, about the strong-as-hell integrity of her character.

And then, at the very end of his powerful monologue, he took a risk. He declared his love for her in front of 6.5 million viewers on live television.

But he didn't say it in a way that made the entire speech about his love for her.

Drake inherently understands love isn't the most important accomplishment of a woman's life, and this wasn't what the night was about. He proclaimed his feelings in a respectful manner, and he rawly confessed his deep love.

By the end of it, my heart felt like it was practically soaring into the ceiling of my prewar, crumbling down, Upper East Side apartment building.

And it's not because I'm some celebrity-obsessed fan girl, but because it was so refreshing to see a nice guy recognize a fierce woman for once. Especially after Kanye West's bizarre, wildly narcissistic speech in which he compared himself to Truman Capote and gave a shout-out to his wife.

It's so refreshing to see a nice guy recognize a fierce woman for once.

Drake publicly declared he sees Rihanna for who she really is.

Yes, she's breathtakingly gorgeous, but he didn't harbor on her physical beauty alone. He knows her beneath the gilded illusion of fame — beneath the slew of impossibly cool tattoos and her badass exterior.

I could also see Drake appreciates her for being this untamable, gorgeously rebellious, provocative, groundbreaking fashionista.

He's not threatened by any of it. In fact, he's in awe of it. And he's man enough to own it.

You know why? Because he's a nice guy.

And, according to this article in ET Online, he and Rihanna are officially a thing now. They've been spotted at Nobu and have been sharing hotel rooms, which, in the bizarro land of celebrity, means you're most definitely a couple.

She's had a history of dating people who weren't worthy of her mind-blowing, powerful energy (Chris Brown, need I mention anymore names?). Now, she's putting her energy into the nice guy, because he won't suck it dry.

He'll fuel her energy so she has enough to channel it into other things, like her friends, career, family and style.

We all deserve a Drake, girl. Gay, straight, bi, trans — whatever our gender identity or orientation, we all need to stop screwing around with these narcissistic, vacant, egomaniacal people.

A lot of times, we'll date the emotionally removed guy or girl because we think we can "change them."

Our self-esteem is low, we think that by winning their approval, maybe we'll finally be able to convince ourselves we're worthy. It's sad. And all it will do is make your self-esteem go up and down like a seesaw.

The "Bad boy" or girl type is wildly unpredictable. You'll be trying to chase patterns in their behaviors, but you won't be able to find a solid one. And you'll never have real love with these people, babes.

The bad boy can't see beyond his own agenda, so he'll never see you. And to be loved is to be seen.

The distant girl is disconnected from herself, so she will never be able to connect with you.

The mean asshole hates himself, and you can't love someone else when you hate yourself.

It's time to break the pattern that is ruining your love life and start looking for your Drake, girls, guys, and everyone in between.

Look at how Rihanna is shining right now. Her energy is more magnetic and more palpable than ever. And that's because she's with someone who wants to see her soar.

If she had stayed with the bad boy, he would have dragged her into the ground. She's too bright of a light to be face-first in the dirt.

And you're too bright of a light, too.

So remember: The nice guy isn't the weak guy; the mean guy is.

The nice guy is the one who's strong enough to never be threatened by a woman's success.

The nice guy is the one who's strong enough to never be threatened by a woman's success. In fact, the nice guy is only empowered by it. And if the girl is smart and self-respecting like Rihanna, she will realize what she has, and recognize him for gem he is: