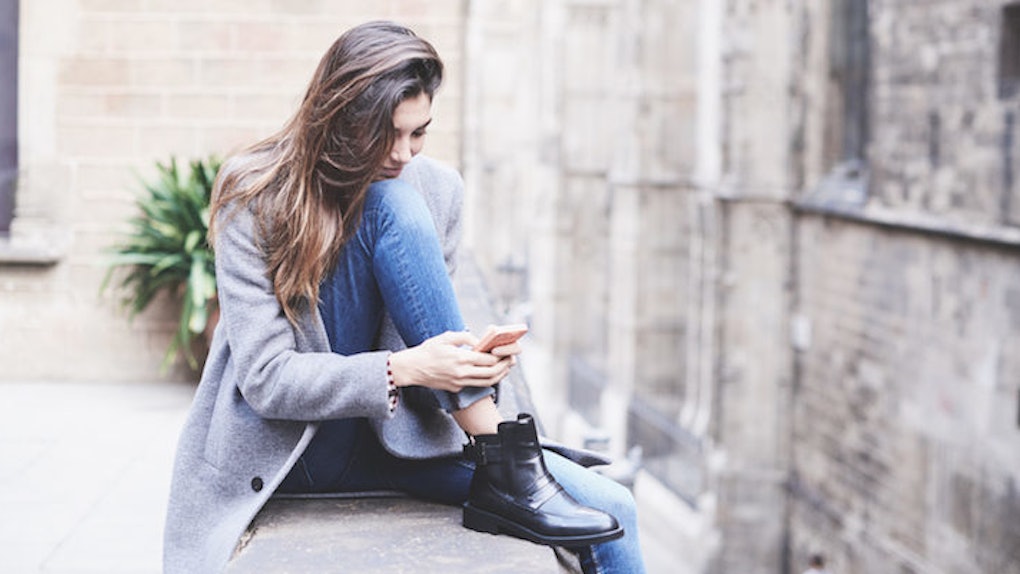 Yes, You Can Text Someone Twice If You Don't Get A Response The First Time

It was a night that started like many other unassuming Saturday nights. I was at my favorite Italian restaurant with my sister.

But I had no idea a two-word phrase I would learn that night was about to rock my world. After more than a few glasses of wine, we got to talking to our favorite bartender – we're regulars at this place – and swapping funny dating stories.

On this night in particular, we were discussing a much older patron (who was also a regular). He had insisted on taking my sister's number the night before. She had been dodging texts from him all day. So, with pinot noir and giggles on deck, we relayed the entire story to our bartender friend (otherwise known as our trusted advisor).

To further illustrate the whole scenario, and to adequately display how uncomfortable the conversation had become, we passed her phone over the bar so he could read their entire awkward text conversation for himself. A look of horror passed his eyes as he saw their latest correspondence.

There was not one, but two unanswered texts from him to her. It was right there, in that moment, when he coined what now may be one of my favorite phases of all time. After seeing the texts, his reaction was, “Oh my god. He gave you the double blow up? So embarrassing."

A double blow up is when you send somebody a text, only to not receive a response. So, you send another one.

Let's be honest here: No one wants to send a double blow up.

Sure, in established relationships, or with your friends, no one gives a f*ck about the double blow up. However, when you're texting someone brand new, the double blow up looks embarrassing and desperate. This is something none of us want to be.

When we meet someone new and exchange numbers, there is typically interest on both sides. Those “off” situations where someone just doesn't get it tend to be exceptions to the rule.

We're adults here: We should have a good grasp on who is interested and who isn't. So, when it comes time to actually use those exchanged numbers, we panic.

The struggle is real. How soon is too soon to text? Do I wait for him or her to text first? Do I go with something witty or basic? Will it look like I'm trying too hard?

So, this is the issue: If you send that first text (believing that the person liked you too), and it goes without a response, what do you do? There is seriously nothing worse than feeling like your text was ignored by a crush. It is an ego blow we all take with a lot of sensitivity. Then, you start thinking your text was never received in the first place.

Yes, I realize this sounds like a ridiculous girl excuse. But hear me out.

A few weeks ago, I exchanged numbers with a new guy I have a bunch of mutual friends with. After he sent the initial text and I responded, I heard nothing. Terrified of being the sender of the double blow up, I said nothing else. So, I didn't hear a peep from him.

Meanwhile, I was thinking, “WTF? Why text at all if you're not going to respond?”

Later, while I was talking to one of our mutual friends, I asked why I had never heard anything back from him. Turns out, he had responded to me. I've literally seen the screenshot, with the blue bubble validating that the text he sent me got “delivered.”

Had I not had our mutual friends play detective, I never would have known about his response. This is a luxury not many of us have.

Texting someone brand new is nerve-wracking. But I say we all need a bit of a reality check. Stop the stupid sh*t, be kind and at least respond to someone and tell him or her you're not interested. Risk the double blow up if you really like someone, and walk away if you still don't get a response.

But more than anything, just try to be yourself. The rest should work itself out.