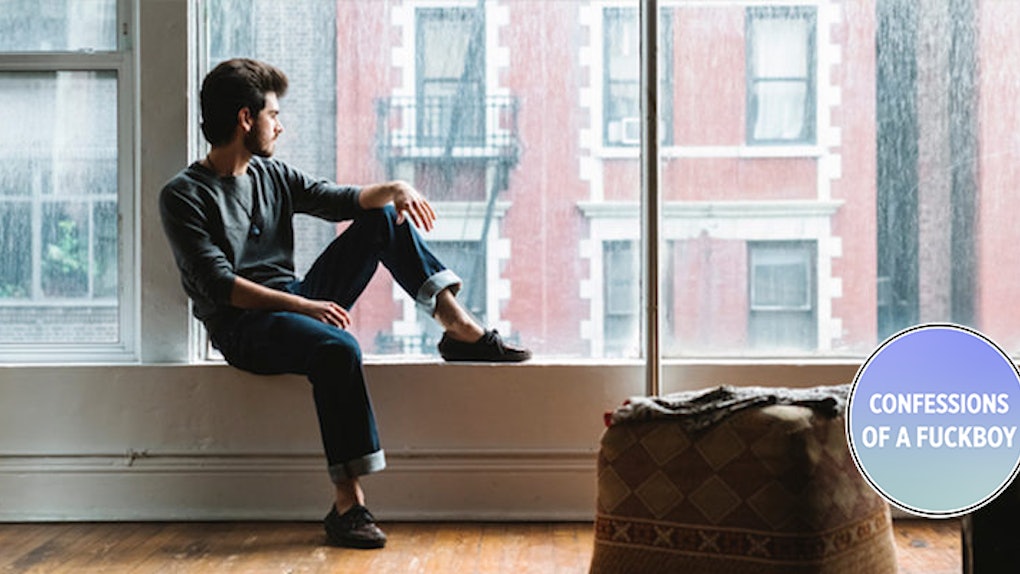 Why I Didn't Want A Long-Term Relationship

I knew I couldn't be long-term with you because you needed me more than I need you.

I knew I couldn't be long-term with you because you ordered the duck.

I knew I couldn't be long-term with you because your dad didn't like me, because we were in each other's pants that first night in the back of the cab, because you need things clean and I need them chaotic.

I knew because I didn't want to be long-term.

Because it's still my life, and I'm not willing to share it with anyone yet, and because I choose to consider the aloneness freedom and latitude, not loneliness.

It's still my life, and I'm not willing to share it with anyone yet.

Without a responsibility to anyone but myself, I can achieve what I want or fail at what I want to achieve, either way, without punishment.

This is the most important thing to me: that I never become the guy blaming a woman for his life passing him by.

People say life gets in the way and all that, but it always seems like "life" is code for "somebody else," until that snowballs into more somebody elses, and before you know it, you're in a golf shirt somewhere, millions of miles from your dreams.

Henry David Thoreau said something to the effect of how it's foolish to pine for the company of far-off companions because however close together your souls seem, your bodies would never be further apart.

That's kind of how I feel about the person I do end up with, whoever she may be. Because you're not her.

Which is why what feels like the noblest thing to do right now, the fairest thing for myself and everyone else, is to de-clutter my life, to streamline it. This happy grace period they call youth is almost over, and the consequences they talk about are about to start kicking in.

They don't stop once they start, and I plan on milking every minute of this grace period that I can.

This happy grace period they call youth is almost over, and the consequences are about to kick in.

I knew I couldn't be long-term with you because I'm spoiled and you're spoiled, because you live three trains away, because you work nights, because you don't eat carbs, read Bukowski or care that rhinoceroses are going extinct.

Because you think money equates to intelligence. Because you don't want me, you want anyone, for Snapchat, for Instagram. You want to inspire envy – and because so do I.

Because I can't even commit to a tattoo, because my aunts and uncles who married at our age are now miserable, because my parents are racist and I still love them and couldn't bring you around. Because you want to go to Disney instead of to Bali, to Caracas and to Nepal.

Because there are 5,000 other women I could feel this way about if I'd met them.

There are 5,000 other women I could feel this way about if I'd met them.

Sure, we went to a hockey game and stole candy bars from the corner deli and drank on a roof while holding each other.

But I knew I couldn't be long-term with you because you never enjoyed your loneliness, you never wore it like a scar you were unwilling to hide. Because you never woke up on a bench in Washington Square Park with the sun in your face, wondering how you're alive.

Because when I finally left you, I felt nothing driving my feet back to you. There was no urgency, no longing.

Because each time I saw you, I liked you less and less until you became something obligated, something scheduled, a dentist appointment.

But I knew I couldn't be long-term with you because I have it in my head that I need to get somewhere, that none of this matters compared to what's ahead.

Because I've tried it already and just can't convince myself anymore that anyone else is more important than the rest of the world. My world. Whatever that may end up being.

Like everyone else, I was taught finding another person would be necessary to fill some other part of me, some part that was lacking, and that afterwards, I'd be replenished. Without that, I'd never be whole.

And it does feel as if something is missing – it's been that way since I was eight – though I'm not sure if it's our parents who put that thought in our heads, or our teachers, or the movies or if it's just part of being human. But it's certainly there.

Then, I realized even too much Chainsmokers is too much, and too much beer makes you hurl, and it became clear you didn't fill a part of me.

That is just another lie we need to unlearn. People fill schedules — they fill time — and that just isn't the same. The emptiness was there, filling occasionally and constantly emptying, whether you stayed or went.

People fill schedules — they fill time — and that just isn't the same.

But if money can't fill it, beer doesn't fill it and you didn't fill it, if it was still there with you lying next to me, twirling your hair and doing nothing wrong, then maybe the emptiness isn't going away. Maybe it isn't supposed to. Maybe it's just natural.

Or maybe it's just me.

I knew I could never be long-term with you when I realized that. I've been trying to figure all these things out on my own for so long. I'm so close, but I need to get there by myself. Because it's still my life, and it's still yours.

That's how I knew I could never be in a long-term relationship with you.

And by you, I mean all of you.