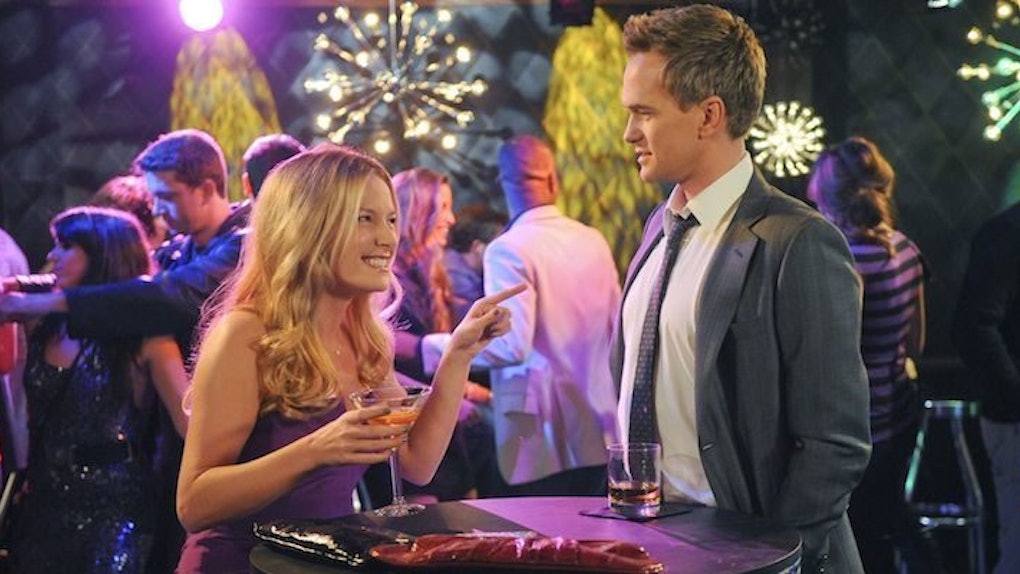 It's pretty much common knowledge that the bar is not the best place to meet good, wholesome, bring-home-to-mom type of girls, but if you're a single 20-something guy, chances are you spent at least a couple nights a month frequenting these fine (or not so fine) establishments.

We arrive in flocks, ready to take on the evening and search out opposite-sex companionship.

Trust me when I tell you, girls, we don't ever want to just "go out with our friends and dance" like you do. We don't formulate plots to fend off any possible approaching females the way you do males. And since my sh*tty dance moves are not going to get me into your pants, chances are I'll be posted up by the bartender making funny comments and insulting strangers when the DJ is playing the crap that passes for music nowadays.

And guys, unless you're simply looking for sex with any rando, common sense dictates that a place where people go with the main purpose of getting inebriated and throwing caution to the wind is not the best environment to cultivate the beginnings of a relationship. Even if you are just looking for a string-free sexual encounter, your local watering hole is going to be loud, crowded, and full of competition.

But fear not. Picking up girls at a bar is not impossible -- it's not even that hard -- as long as you have an inkling of an idea of what to do. Or, more specifically, what NOT to do.

I've learned much of this through trial and error, and I got rejected A LOT in the process. Luckily, when it comes to getting shot down by women, I've been fresh out of f*cks to give for quite a while now.

Through my hours of laborious research (reading about sex), field experiments (getting sh*t-faced and hitting on girls) and deliberate observation (being too drunk to walk so I study the guys who can still migrate the playing field), I have discovered four major DON'Ts when it comes to finding Mrs. Right, or at least Mrs. Right Now... the choice is yours.

(Actually, the choice is theirs, too.)

I don't even feel like I should have to get into this, but because of you mouth-breathers who bought into the PUA (pick-up artist) culture and believe in sh*t like "peacocking," "negging" and using previously rehearsed and rehashed lines, I am forced to address this stupidity.

Women are smart and intuitive creatures. They play judge, jury and executioner in a matter of about 30 seconds every single f*cking time a guy approaches, which probably averages out to once every four minutes and 30 seconds on a typical Saturday night out.

Needless to say, they've gotten pretty damn good at smelling bullsh*t from miles away and seeing through the charades. Very few guys can pull of a rehearsed line and sound natural, funny and inviting without making the girl feel as if you've probably used that line at least three times already that night.

Instead, why not think of an easy ice breaker?

You can mention something about the service at the bar ("Holy f*ck, I think Jesus is going to come back before I get another whiskey and Coke. How long have you girls been waiting?"); you can observe another bar patron and make a joke, WITHOUT coming off as too egotistical or rude ("I'm not one to judge a guy's looks and personal style, but if Carrot Top had a love child with Gary Busey I'm pretty sure this is what he would look like."); you can even go with a bit of self-deprecating humor (If I piss myself right here, do I blame a weak bladder, a long bathroom line or the slow service?).

Nothing that I've written above is something I've personally used or even thought of prior to drafting this article, but it gives you an idea on how to create an “in” that shows you don't take things too seriously.

You're not desperate for attention; you're a guy who cracks jokes to anyone who's around him. That's more attractive than any line you could ever use.

A guy's out with his friends. They're laughing and bullsh*ttin' around, just having a good time getting drunk. One or more of them notice a group of attractive and possibly single females in the nearby vicinity. Clearly, due to the mix of alcohol and testosterone, they have no choice but to heckle each other until one of them gets the balls to go start a conversation.

This is where the problem lies: Too many dudes will walk up, stand way too close to the table (very creepy like) and become a deer in headlights. Minutes pass as he pretends to check his phone, signal a bartender, whatever he can do to make it seem like he's NOT a f*cking weirdo.

Don't hesitate, and don't overthink it. It's just simply the art of conversation. Initially, it should be no different than talking to a co-worker, a friend, even your grandma. Women will be much more receptive to a conversation if it doesn't automatically seem like you're trying to pick her up. Be funny, be smart, be attentive, and be yourself. Don't think you need the ultimate icebreaker, because there's a damn good chance that, by the time you think of it, she'll be long gone (or with someone who didn't hesitate).

3. Do not ignore her friends.

This is probably one of the biggest problems with approaching a group: You like one out of three, and she's the only one you want to pay attention to and buy drinks for.

I get it, but guess what, she's not there with you, she's there with them. Your only hope is to get them to like and accept you enough, so maybe, you might be able to get the one you're interested in alone for a little while.

Ask everyone's name, show interest in all of them as individuals, and if you want to buy a shot for you and the girl you like, man up and get a round for everyone.

Make it fun. Make them like having you around, and it'll be a lot easier for you to not get cock blocked. In fact, if you do it really well, they might even encourage their friend to give you her number.

Social status is important to both men and women, and part of that directly correlates with who you will associate with romantically. If you've proven that you're fun, nice and bring something to the table, the girl would even be more likely to date you.

Think about it: She already knows her friends are accepting of you. You can potentially improve her “social status.” That is HUGE!

It's just like I wrote above, they didn't come there with you; they came there with their friends to have a good time. They're not obligated to give you any attention, even if you bought 'em a drink, so be grateful for what you do get.

That's not to say that your time isn't just as valuable though. You should be there to have a good time, too! Get hammered. Get loud. Get obnoxious, and blow off some steam from the workweek. The primary goal is to have fun; the subordinate goal is to pick up a girl.

That should be obvious in everything you do, and by not hovering over the girl who actually talked to you for three minutes as she awkwardly waits for you to go away, say something like "I'm going to catch ya later, hopefully. I gotta meet back with my friends. I owe the next round".

Then gauge her response, and go have fun. If she gets disappointed, she'll either find you or be thinking about you, so now, if you run into her later, a positive emotion is immediately triggered.

Plus, you can go up and talk about how she should have seen such and such that happened outside and really make it known that your night was not centered around her, or anyone other than yourself, for that matter.

Be acutely aware of how she's reacting: Don't leave too soon, and don't stay too long, but let her miss your presence for at least a little bit, and enjoy your night out.

There are so many wrong ways to go about meeting someone in the bar, and only a few right ones. Granted, there are exceptions to every rule, but for 99.9 percent of your encounters, if you heed my words, you'll find yourself doing a lot better in this department.

And you'll meet some fun f*cking people to drink with in the process.