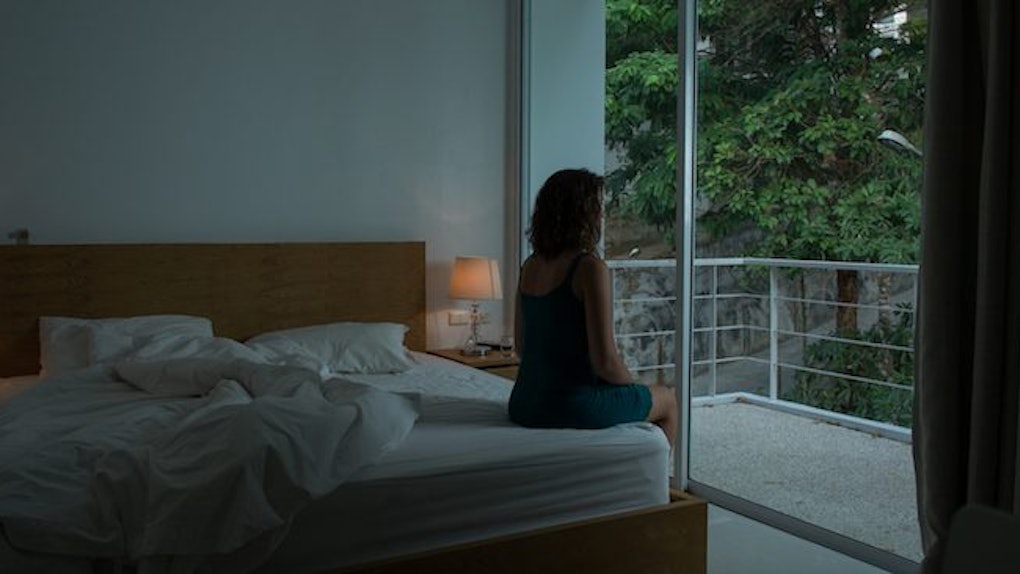 Dating is already very much an emotional minefield on a good day.

But trying to navigate through the maze of emotions that is dating gets even harder — and can seem impossible — when you're already grappling with a mental illness primarily affecting your emotions: depression.

While we might all attribute things like feeling sad and crying a lot to depression, the mental illness can actually take a much more serious toll on those who live with it.

Because depression can severely affect a person's ability to get up in the morning and live their lives, it can make dating — something that literally requires you to function pretty well — a little bit of a challenge to deal with.

In honor of National Mental Health Awareness Month, Elite Daily spoke to a couple of experts about how dating can change when you have depression.

People with depression may find it hard to function day-to-day, much less deal with dating.

Obviously, dating is very much a social activity. Especially in the early stages of getting to know someone, you have to be “on” whenever you're around them.

But finding the motivation to do so can be incredibly hard for someone dealing with depression, given that their day-to-day functioning is sometimes quite low.

"If somebody has unremitting chronic depression, typically, that's going to impact their ability to function, based upon whether or not they're getting treatment that's effective,” Dr. Gary Brown, a licensed marriage and family therapist, tells Elite Daily.

Dr. Brown also explains that the typical symptoms of depression — “the person feels numb, [they're] withdrawn, their sex drive (their libido) is significantly reduced, they're not feeling great self-esteem, lack of sleep, fatigue” — can greatly impact a person's ability to find the strength to date at all.

“Typically, when somebody's deeply depressed, they tend not to date that much, unless they're looking for kind of like a fix, because they're usually socially withdrawn,” says Dr. Brown.

Clarissa Silva, behavioral scientist and author of relationship blog, YOU'RE JUST A DUMBASS, also explains to Elite Daily that even when a depressed person is able to function, the "mental preparation" required for dating may be too much sometimes:

You must keep in mind that sometimes they will alter plans unexpectedly simply because they just don't feel like they can do it that day. They have intentions of meeting with you, but want to present their best selves, as we all do.

The negative stigma attached to depression can dissuade depressed people from dating or from talking about their mental health.

The stigma surrounding depression not only makes people apprehensive about bringing it up with their partner, but it can also make them reluctant to continue dating at all.

“[A depressed person may] feel like, 'I'm depressed. I'm really not worth dating right now. I'm probably not going to give you good company,'" Dr. Brown says.

In turn, a person who feels this way as a result of the stigma may become even more socially withdrawn and may continue to reject dating — and even treatment — entirely, despite the fact that “the vast majority of people who get treatment for depression actually benefit from it.”

In order to fight against the stigma, Dr. Brown recommends being open about your depression with someone you're dating once you guys are past the casual stages to “take some of the stigma away”:

I really like to encourage people to say, 'You know what? I suffer from a condition that's pretty common in the population. I have this sadness sometimes about me.' You don't even have to use the word depression.

Though some couples can quickly and easily move on from any sort of trials and tribulations in a relationship, people with depression might not be able to brush it off so easily.

Silva explains that arguments with a partner may make depression symptoms worse, as those individuals "have difficulty moderating between the argument and the negative view of themselves and their circumstances."

Moreover, according to Silva, depression can make it quite difficult to look past the negativity, and it can even make you "seek thoughts that affirm the negative and distort the positive."

Given a depressed person's potentially distorted view of reality, she also explains that partners of depressed people should think before they speak:

Be cautious of what you say. A depressed person will read into what you say, take it deeply personally, and analyze it for hours until it confirms every bad thing they think about themselves.

Those with depression may prioritize the person they're dating over their own self-care.

According to Dr. Brown, "when we're depressed, we tend not to take our self-care that [seriously]." Those who do date with depression may often put aside seeking treatment for the root of their problems (depression) in favor of trying to make dating favorable for the other person.

"The number one priority when you're dating if you're depressed is not your date, it's treating your depression. That has to be the highest priority," he says.

Though, unfortunately, those with depression may not realize prioritizing your date won't solve your problems. He further explains,

[Clients will] say, 'Listen, I don't have a sex drive.' And I say, 'You having a sex drive right now is not really important. It might be to your partner, but the important thing we have to do right now is to help you lift your mood.'

Dr. Brown also says that, while depressed people may feel the need to force themselves into dating, they shouldn't push themselves if they're not ready.

Though dating is definitely not impossible to do, Dr. Brown advises those living with depression to focus on the real issue: "If you want to have a really good outcome in terms of dating, get really good treatment for your depression."