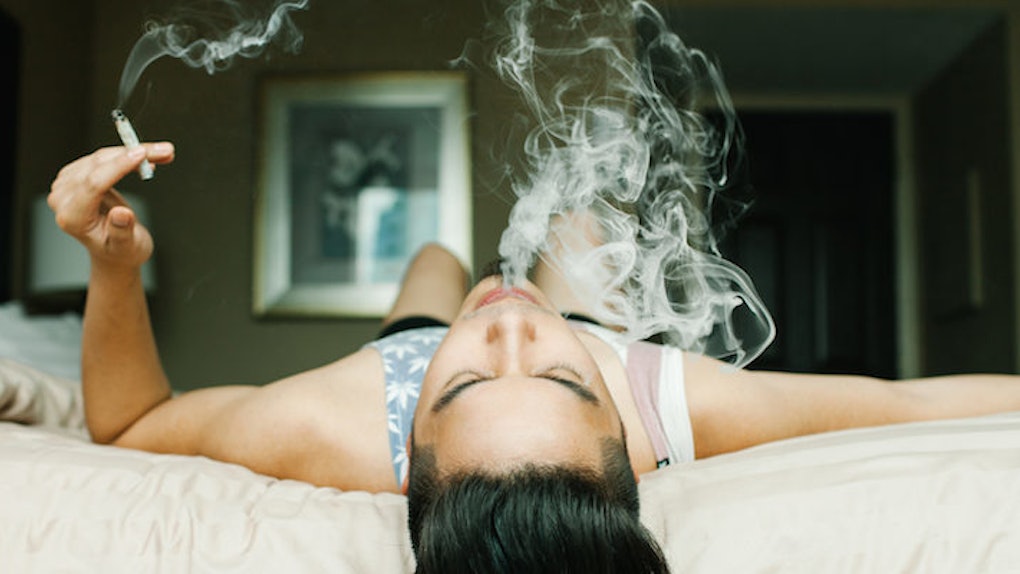 Coming Down From The High: What It's Like To Date An Inevitable Stoner

When I was sitting on a roof deck on Memorial Day, I seriously wondered if I had been with the wrong guy.

I was tipsy and tired from a day full of spontaneity, and it was nauseatingly reminiscent of the trouble I used to be involved in when I was 18.

He was sitting close to me, even though it was hot.

He had a few broken ribs, but he still decided to jump from a tattered rope into a river earlier that the day. He pounded down Coors Lights, but he disturbingly didn’t act any differently.

He puffed and passed to ease his pain, and I watched him wince less and less with each drag. It was then, with his hand clammy on my thigh, that I began to feel like an alien in his world.

As this modern-day "Dazed and Confused" scene unfolded before me, I honed in on our relationship.

I was absolutely certain his partying wouldn't really affect our love life in the traditional way (aka the dreaded “whiskey dick”).

What I could gather, though, was he suffered from a newly-branded concept called “weed dick,” and it was a million times worse than its boozy predecessor.

Instead of not being able to simply get his dick up, he had trouble getting his entire life up.

He was stuck on pause.

His life clouded with smoke, and it revolved around his equally medicated, pseudo-adult friends.

Because I initially found the metaphorical contact high so appealing, I decided to continue on his slow, removed-from-reality ride.

To put it candidly, at first, the appeal of the guy with weed dick is strong.

He leaves you dizzy and numb, as he shrouds the often fast-paced, unforgiving universe of finding balance as a young adult.

Juggling a job, a full-time student status and any other spontaneous hiccup can be rough.

At the end of the week, as you reach for that damn bottle of cheap Cabernet, you feel just like the old leftovers sitting stagnant in your fridge. You just feel old.

I was 21 and already groaning about my morning commute, carrying a purse faintly stained with Starbucks' Pike Place roast and filled with used tissues.

The thing I looked forward to the most was taking off my shoes.

Put me on the top page of the legal pads dispersed around the office, and you could have mistaken me for someone three times my age.

I needed a reminder I was in the golden, sun-soaked days of my youth, not the 3-pm coffee break of a midlife crisis.

When you're the emotional equivalent of a balding man, the weed dick is the perfect cure.

See, I didn’t expect to walk into a bar the night of my birthday and hit it off with the guy mixing my drinks.

At first, when I sat down at one of the stools lining a dark wood counter, I avoided his eyes, still stuck on the notion I was just an invisible cog in the 9-to-5 machine. But when I finally looked up, I found it.

He was the reminder, clad with baby blues reminiscent of Sinatra and a sharp, gritty wit like Eastwood's. He smiled slyly at my jokes, engaged in smooth, fleeting conversation and played it cool in a way no 50-year-old man could ever successfully pull off.

He was 25. In that cat-and-mouse moment, I was completely intoxicated off something much stronger than alcohol. It was distraction in a pure, unadulterated form.

It made me think outside the monotony of my present.

It was taking a long, deep drag and exhaling all the heaviness I had felt before. I was light, and I let myself forget. I liked it.

But highs aren’t supposed to last forever. As I inevitably sobered, I noticed he refused to ever come down. We both craved substance, but in totally opposite senses of the word.

This is the danger of the weed dick.

When your new significant other is decently drunk a decent amount of the time, the red flags are raised faster than a senior citizen double-dosed on Viagra.

You get out fast and are relatively unscathed from the burn. But since regular visits from Mary Jane are so fresh on your list of widely accepted behaviors, no one fully understands the effects of dating a guy like this.

The truth is, I think the term "weed dick" is bullsh*t.

However, metaphorically, it’s one of the slyest relationship killers out there.

Sure, if you’re with a guy who's too doped up to function, there’s no way other things are going to be up to par.

But if marijuana is his habit of choice, take a second to think about the type of movement you actually want for yourself.

If you’re looking for the up, then the guy who is simply floating is not for you. As you ascend vertically, he’s sticking to a horizontal line.

Yes, your paths may cross. But in the end, you’re built to surpass him. After that point, there’s no turning back.

So, enjoy the holiday of dating the weed dick. But remember there’s nothing wrong with wanting to go back to work after the high wears off.