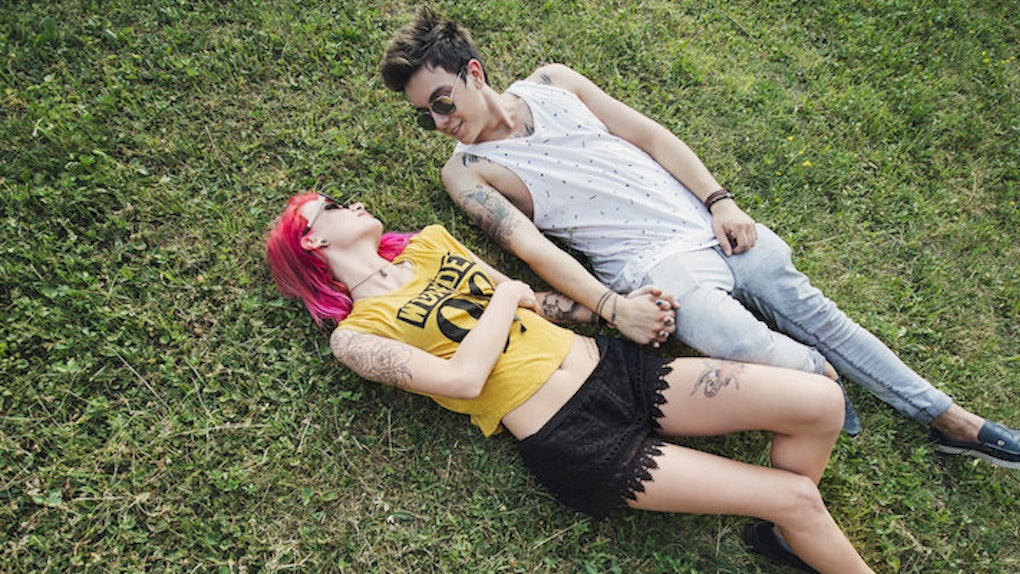 Dating In Your Early 20s Is Better

When I look back on what the dating world was like in my early 20s, I usually have the same reaction. I shake my head. I roll my eyes. I make some sort of choking noise, like I'm about to dry-heave. Or I just do all three at the exact same time.

It's not that looking back on that time completely disgusts me. It actually wasn't bad at all. My dating experiences were fun and light, and there was always a sense of "let it be" or whatever happens happens -- because that's just how life goes for young and resilient 20-somethings.

But then I compare those younger years to the pitiful dating scene of my late 20s, and realize how great I once had it. And that's when, after shaking my head, rolling my eyes and choking on my thoughts, I want to drink too much tequila to forget about it all and hide under the covers with a constant rotation of Netflix rom-coms.

But of course I keep thinking about it -- overanalyzing like love-hungry girls do -- and trying to make sense of it. So what was it exactly that makes the dating scene of your early 20s seem so much better than your late 20s?

1. Most of Your Friends Are Still Dating, Too.

When your whole squad is single, it's like "Sex and the City." Brunches, dinners, cocktails, dancing at the clubs — it's just you and your girls sharing stories, laughing about guys, giving advice and letting them text for you when you don't know what to say.

You're all in it together! And it's fun that way. So when you're out and about, your squad is a force with endless possibilities of what might happen, like meeting a group of dude friends and then going out on a massive date all together.

But at the same time, if nothing at all happens, you at least have your girls to group text, drink bottomless mimosas with and laugh about the single life.

But, when you're in your late 20s, less and less of your friends will still be single. They're either seriously dating someone or engaged (or even worse, married), and there you are, still dating, still single.

And instead of celebrating singledom with your friends, you're now ordering pizza alone, drinking alone at the bar, stalking everyone's glamorous “bae and me” selfies and feeling like a total loser.

2. You're More Willing To Date All Types Of Guys.

You went through college dating a certain type of guy because that's all you thought you liked, and now you realize how stupid it is to limit yourself when there are so many different options out there.

That's when that outlook of what happens happens comes into play. As long as you're having fun and mixing up your dating pool, what is there to lose?

But, when you're in your late 20s, you're far less interested in continuing to test out the waters. You've been there, done that (a few times, probably). And now you know exactly what kind of guy you're looking for. You won't want to waste your time if they don't fit the mold.

3. There Are Less Deal-Breakers

You're just so happy to be on a date. It doesn't matter where he took you. It doesn't really matter what he's wearing, how he speaks, what he ordered. It doesn't even matter that he let you split the check.

You're sort of oblivious to people's quirks when you're younger, which, believe me, is a trait you want to hold on to. And you're also trying to make a good first impression, so half the things he's doing you're not even realizing.

He just has a nice smile. Was that his foot against yours under the table? It's all sort of dreamy. And his body is crazy.

But, when you're in your late 20s, one wrong move and he's done with. If he doesn't pay for dinner, goodbye. If he slurps his soup, see ya.

And if he wore an old baseball tee-shirt with paint on it to a nice restaurant, peace. You're too old now to deal with clueless guys like this. You want a man -- a real man -- and if he doesn't know how to act, you'd honestly rather be alone.

4. There's No Pressure About The Future.

The last thing on your mind when you're in your early 20s is marriage and babies. (Let's hope.) All you care about is the fun stuff, which is exactly what this time should be all about.

So, when you're dating, it's all about the conversation and flirting and hoping that at the end of the date you'll maybe get a little kiss along with him saying, “I really like you. Let's do this again, sometime.”

Score! That's all you wanted!

That's the best scenario, ever! And then you can go home all googly-eyed and blushing and feel like you might burst until he texts you next.

But, when you're in your late 20s, the pressure of “the next step” is unfortunately really heavy. If you don't see this guy as a potential forever person, why are you going to waste your time?

You might not be ready to get hitched any time soon, but the older you get, the more this idea pulses in your head. Is this guy someone you could actually see yourself getting serious with? Is he husband material? Does he want kids? These are the questions that plague your mind, unfortunately. Because you're not 22 anymore.

If the date was bad, oh well. There'll be another soon. And if the chemistry just wasn't there, it just wasn't there. Oh well. Shit happens. It isn't a big deal. But this stuff will never break you.

This is what dating is all about. Sometimes it's good, sometimes it's bad and if it's neither of those things, then you go out with your girlfriends and get drunk and forget all about it.

Again, there's no pressure. Let it be. There are guys everywhere, anyway. You're bound to find another one at any given second.

But, when you're in your late 20s, it feels like you don't have time for bad dates or missing chemistry. And it is a big deal because every time this happens you can't help but to feel so discouraged.

When will your next great date be then? Where is he? What if you end up single forever? The frenzied questions start happening. And because the pickings feel especially slim these days, instead of going about dating organically, you're going to be on the hunt, trying so hard to make things happen.

And if it doesn't, that's when you start to psyche yourself out even more, because time is running out! Being single sucks! Fuck dating! Where is he?!

Sigh. Oh, dating. What a mind-fuck.