We’re told we live in the most interconnected time in the history of the world.

There’s a social media platform for every age group, gender and interest. It’s never been easier to make a connection with someone halfway across the world, in no time at all.

So why does it feel like we’re more isolated, anti-social and anxious than ever?

Why, in giant cities crammed with millions of people, do we go out of our way to avoid eye contact, whether it's sitting in public transportation or even just walking down the street?

Why, even in previously social environments like coffee shops, do we look around and see most people’s heads buried in laptops or smartphones, with ears plugged with headphones?

The answer, surprisingly, has less to do with technology or society, and everything to do with our genetics and in-built psychology.

For a good few hundred thousand years, before the birth of agriculture about 11,000 years ago, humans lived in small, nomadic tribes of around 50 people. These tribes practiced what Christopher Ryan coins “fierce egalitarianism," when social norms surrounding sharing food, tools and all resources were strictly enforced.

These rules were essential for the tribes' continued survival. After all, just one individual hoarding food for him or herself instead of sharing it could cause the rest of the tribe to starve.

The punishment for breaking the rules would be being cast out of the tribe, where that individual would very likely die (and, more importantly from an evolutionary perspective, would not pass on his or her genetic material to any future generations).

Thus, we are all descendants of people who were conformists. This is illustrated in the famous Solomon-Asch conformity experiments, where educated graduate students would ignore clear, obvious evidence in front of their own eyes in order to agree with what their fellow classmates were saying.

What on earth does this have to do with online dating, you ask?

Well, it explains why the feeling of fear, high heart rate, sweaty palms and any other flight-or-flight response is also activated when you are attempting to summon up the courage to chat up that cute girl sitting at the table by the window.

Think about it. What’s more scary? Telling a story to one friend over coffee, or having to tell the same story, on stage, in front of a crowd of 500 strangers?

What would be more embarrassing? Asking someone out via text message and being shot down, or realizing the entire exchange was in a group text?

So, the real fear isn’t even that your romantic interest might say no. It’s that other people will see the person said no and ridicule you for it.

The underlying fear that stops us from going for what we really want -- whether it's a romantic partner, starting our own business or writing our novel -- is being judged negatively by others.

Your subconscious is tallying up the potential upside of maybe having an awkward conversation that might lead to a phone number (which could potentially lead to a date sometime in the future), against the downside of public ridicule and almost certain death.

It’s like giving a normal person the opportunity to grab a blood-soaked penny out of an angry shark’s mouth. Why take such a severe risk when the upside is barely positive at all?

The DNA of fear and risk

Historically, men and women have dealt with this fear of rejection in two different ways.

Women, who are genetically lower in testosterone and therefore more risk-averse, simply avoid the opportunity to be rejected by never making approaches in the first place.

Across most societies for most of history, women have been the passive recipients of men’s romantic advances (although in some societies today, such as Japan, this is changing).

Enshrined in most traditional cultures was some form of “coming of age” ritual or ceremony, usually involving a young boy having to face at least one dangerous situation with a high risk of injury or death.

Coming through this would mean you’ve transitioned from a scared little boy into a man who fends for himself and provides for his family, if not the entire tribe.

The message is clear: To be a man, you need to take risks.

But those risks have big payoffs, like enough food for the continued survival of the entire tribe for the next week, for example.

So in most cultures, men are expected to take the “risk” of initiating romantic encounters with women.

If you think about it, doing so would have been nothing compared to the kinds of risks early men would be taking on an almost daily basis.

But of course, we no longer live in a world where we need to pass any kind of physically dangerous test to become a man, nor do we need to spend a significant portion of time hunting or exerting ourselves in any way just to survive.

In fact, since the post-war boom of the 1950s, even the poorest of any Western democratic nation has been afforded a basic standard of living that ensures people can, at the very least, eat a meal a day and have clothes and shelter.

The outcome of this state of affairs, however, is that men are no longer encouraged or required to take these kinds of risks from an early age. The biggest risk the average man will take these days is quitting his job or investing in a tech startup.

This is certainly nothing that produces the same kind of “it’s me or the bear” fear of death.

Therefore, this makes that feeling of fear of rejection seem like even more of a big deal than it would have been to men even a few hundred years ago. But nonetheless, men of the 1950s to the 1990s still had to muster up the courage to ask a girl out in person and potentially be rejected in front of all of her friends.

Even after passing that test, they would still have to follow through and arrange dates, often over the phone. They would have to actually talk to the parents of the girl they wanted to date, and would have to stumble through awkward silences during a conversation with her as they got to know each other.

The solution is the problem

Nowadays, the solution provided by technology has enabled us to eliminate most of these awkward stumbling blocks, which should have made meeting and dating easier and more fun.

So why hasn’t it?

After all, there is no need to risk being humiliated in public because you can just set up a dating profile and wait for whoever’s interested to message you.

You don’t need to stumble through awkward conversations because you can just text.

You have all the time in the world to think of the perfect response.

In our modern lives today, instead of having to risk a potentially awkward conversation by calling up an old school friend to ask how he or she is doing, we can just “like” his or her Facebook status and feel like we’ve reconnected, whilst he or she gets to feel like we still care about him or her.

Why face the possibility of physical violence or arrest by attending a demonstration about a cause you believe in?

Just tweet a link to the petition you’ve signed, and in that moment, get the same feeling of being part of a movement and making a difference without any of the downsides.

While we’re logged on, we can continue to curate the alternate version of ourselves composed of the one selfie out of the 29 we took with the right filter from the right angle on Instagram at the sports game and the three best photos out of the 53 from that trip that makes us look adventurous on Facebook.

Social media has allowed us to create an alternate universe. It's a universe where there is zero possibility of rejection, embarrassment or awkwardness, but we can reap the same feelings of social inclusion, acceptance and validation as if we were surrounded by adoring friends in real life.

Tinder and online dating apps similarly enable us to potentially attain the desired outcome of a date with someone we find attractive without having to actually summon up the courage to strike a conversation and risk the awkward, painful rejection in a social setting.

Even worse, as researcher Sherry Turkle has discovered and written about extensively, the more we rely on communicating over apps, the more our social skills, empathy and genuine connections with others atrophy.

It shouldn’t come as much surprise that over the last decade, the popularity of this new “rejection-free” method of meeting has surged, leading to the current state of affairs in which 35 percent of new relationships in the US are formed online.

So does this mean men and women are meeting more of the right kind of person, having more dates that go well and having more successful, longer-lasting relationships? Well, no.

The founder of OKCupid admits the most attractive women receive the vast majority of messages, and likely give up and leave pretty quickly when confronted with the sheer volume of bland, uninteresting “Sup” and “Hey” they suddenly find in their inbox.

That’s not the worst of it.

It’s not a real social situation when any man, however nice and polite in real life, suddenly has the confidence to be incredibly sexual, vulgar and brash in text without thinking. 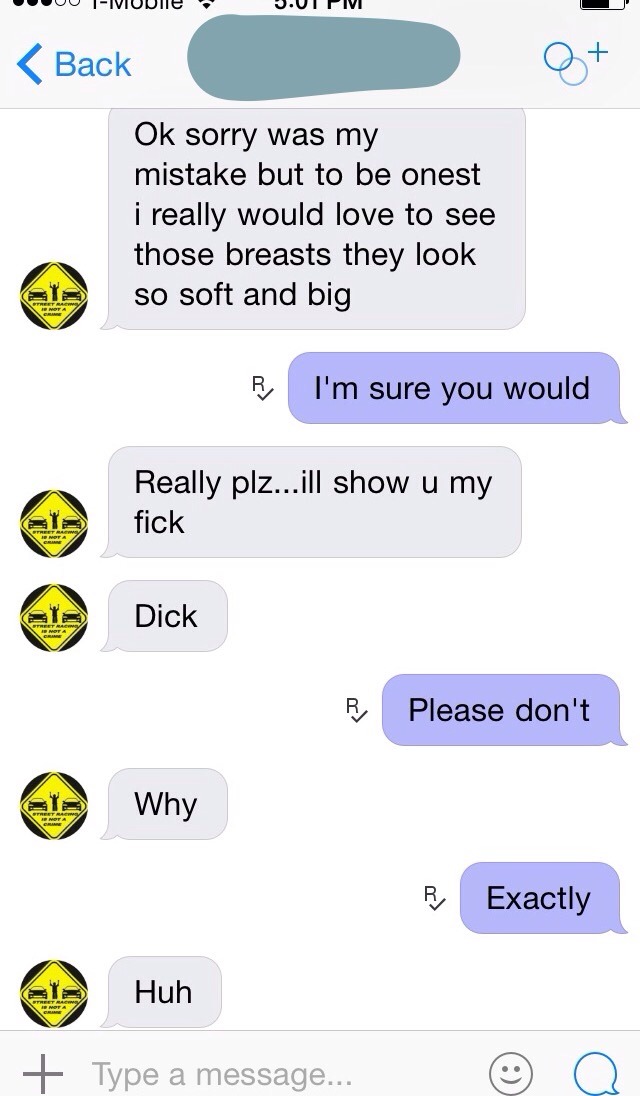 As for guys, it was widely publicized a few years ago that 97 percent of men quit online dating within just three months, mainly due to a lack of responses.

In fact, the authors of Freakonomics found that 56 percent of men never even receive a single message. (Although to be fair, if they’re texting like the bozos above, no wonder.)

So, men of today, there’s actually a huge opportunity here that hardly anybody is talking about.

There's now an opportunity to separate yourself from 99 percent of the douchebags out there. It’s a way to meet women in a way that instantly shows the most attractive trait women want in a man: confidence.

There is no downside, and you can do it in around five minutes per day.

The secret is this: Strike up a conversation with a woman you find attractive during the day.

This seemingly obvious, simple skill is, in fact, one of the most powerful ways to make a connection in the modern world.

This is precisely because of the fact that most people (especially men) are so locked into their devices out of fear of social awkwardness and rejection that just going over, saying hello and giving a genuine compliment is literally the most ballsy, romantic, unique thing they can do.

The only downside is, of course, you must be willing to accept that some women may not be interested in talking to you.

But, as Sasha Daygame, author of "How To Meet Beautiful Women In Everyday Situations" puts it, “You’d be amazed at how kind and sincere their thanks for making their day is. Even if they are not single or just not interested, you’ll still walk away with a smile on your face. You'll be feeling good about having brightened a beautiful woman’s day!”

Try logging off for once, and look at the world around you as a sea of possibilities for new connections in the real world instead.