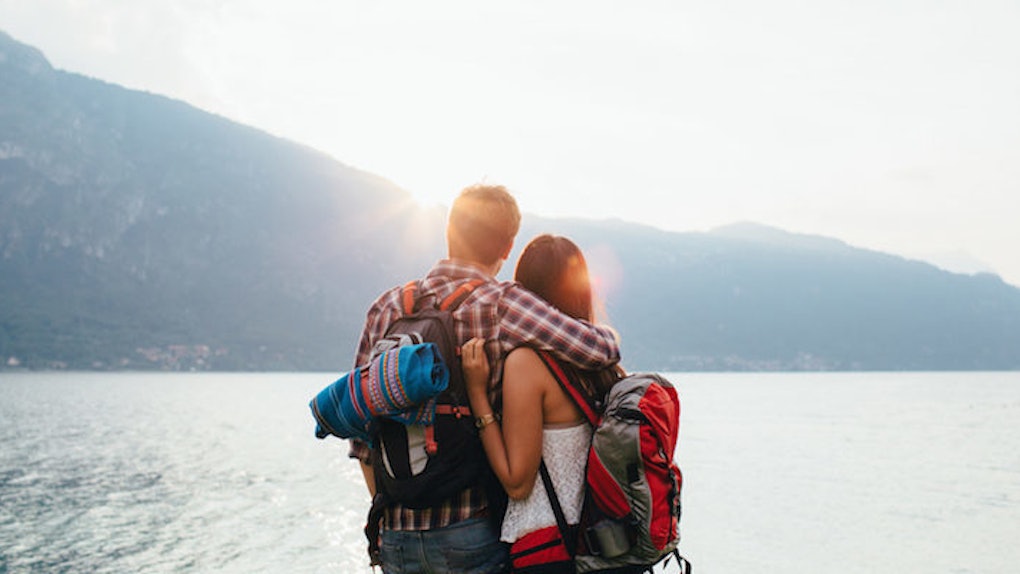 Catching Wanderlust: 10 Ways To Cope With Being A Girl Who Loves To Travel

Bless the hearts of the men who try to keep up with the fast-paced, ever-changing souls of female wanderlusters.

The quick wit, impulsive nature and always-evolving idea of what these women's lives should look like make them some of the most complex creatures to ruin grace the dating scene.

In fact, I'd argue that eating comes second (because diamonds carbs are a girl's best friend).

They thrive in new environments, which may or may not include you, but if you are in the picture, here are some tips to help ease the roller coaster ride dating a girl who loves to travel:

1. She will value experiences over material things.

Skip the overpriced bouquet of flowers and take her to a hidden garden instead. You bring the wine and she'll bring the stories.

This will mean so much more to her than the decaying daffodils she would've snapped a pic of for Instagram before forgetting about it moments later. Because, Generation-Y.

2. Don't pressure her with questions about the future. The idea of "settling down" is slightly very terrifying.

She knows she can't live out of a suitcase forever. But, she's okay with pretending that it's a possibility anyway.

She's okay without the infamous five-year plan. It limits her possibilities because she knows opportunities arise just as quickly as they go.

Solo travelers, by nature, are independent and daring souls. They've navigated the most confusing of railways and survived horror stories from remote locations in the world.

She can hold her own with or without you and despite the rumors of having sugar daddies funding her lifestyle, she only wishes she could be so lucky. Ha! But really.

Everyone has a home base they return to after a while of traveling. But, because she's met so many kind and generous souls on the road, she can make a home wherever she goes.

The idea of having to fly thousands of miles to celebrate every major holiday is no longer a burden for her because she will make the most of any situation no matter where she is.

5. Don't be overwhelmed by her circle of friends/acquaintances.

If she likes you, you won't have to worry about sharing her. But just know there are people all over the world who appreciate her presence just as much as you do.

So, let her be free to reunite with the hundreds of friends she's made while traveling.

There's a certain type of energy she thrives from and only fellow wanderlusters can truly feed that into her.

She questions it enough herself. She's a traveler. She's impulsive. She constantly yearns for more. Her savings account is depleting by the second (sorry, Mom).

Still, she continues on a path so few are able to go on because there's this fire that burns inside her and she wouldn't dare keep anyone around her who tries to put it out.

7. She doesn't succumb to societal pressures.

Biological clocks and fads hardly exist to her. She tends to take what she has and make it trendy.

Often, she can be a trendsetter because of that, and if she's looking to make a decision, society is the last thing she'll turn to.

She was born to stand out and there are plenty of seats to be taken for those who are uncomfortable with that.

Solo travelers have learned how to escape the three "D's" of travel: danger, death and deportation. She stays optimistic because it could always be worse.

The last thing she needs is a cloud of negativity reminding her of every worst-case scenario and safety precaution.

She's a calculated risk-taker. She will always make sure the rewards outweighs the risks.

And, as long as danger, death or deportation have yet to halt her journey, don't add to the list and be a douchebag to ruin her winning streak.

9. Understand she's been single for a reason.

She's learned through travel how short and fleeting life can be, and she wouldn't dare waste it on the wrong person, especially when that hinders the chances for the right one to come along.

It's easy to be in a relationship; it's hard to be in one of substance, maturity and mutual growth.

She's okay ridin' solo for as long as destiny sees fit. Not to mention, she probably sucks at flirting. So, there's also that.

She's a rare breed. She's constantly growing, changing and evolving into the best version of herself, all while leaving her mark on the world.

She has a remarkable spirit that can lift even the darkest of souls, and you'll never have to question her loyalty because she makes it very clear where she stands on everything. She's not afraid to think for herself.

While she may seem like an intimidating package on the outside, first-class stamped and air-mailed to meet you in the most exotic of locations, just know that when and if you get this special delivery, she will truly be a gift.