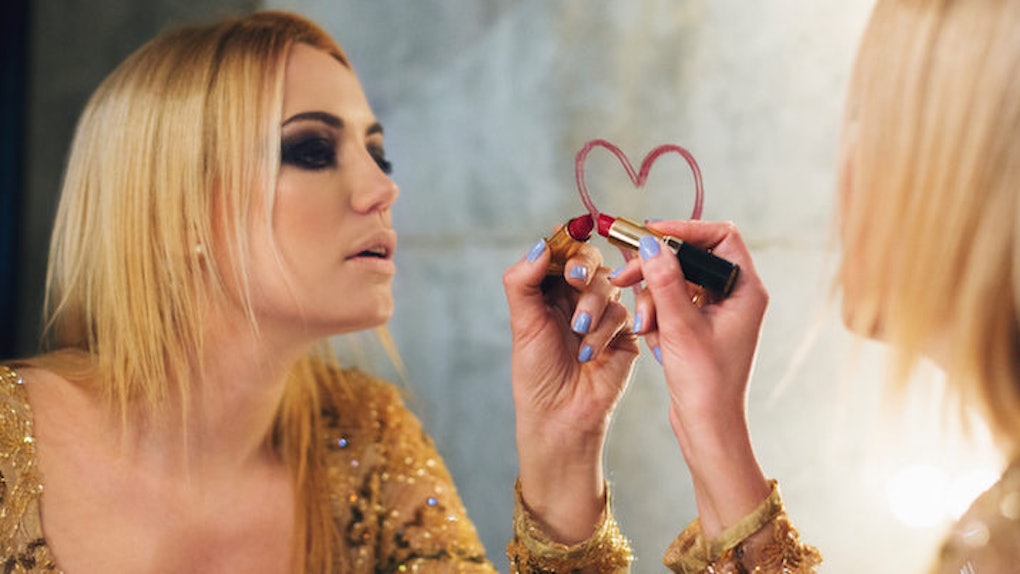 Why Gay People Date Their Look-A-Likes

I was having dinner with a new gay guy friend at a lower Manhattan restaurant notorious for its famous $27 artisanal cheeseburger when I first became aware of the term "twin fucker."

"What's your type?" I asked him, because I'm Jewish and it's in my genetic makeup to constantly try and set single people up.

He bit into his burger, delicately patting the grease on his chin with a floral-printed cloth napkin. "I am my type. I'm a twin fucker," he purred, his voice as sweet as sugar.

I didn't even need to think about what he meant by "twin fucker" for a hot second. I instantly knew exactly what homeboy was talking about.

My good friend Natalie* is a sure-fire twin fucker. We incessantly make fun of her for dating her mirror-image all the time.

Natalie's last girlfriend looked so much like her, in fact, strangers assumed they were twins. Twins. Not sisters, but twins.

When I called her the other day, I couldn't tell if I was speaking to Natalie or Natalie's girlfriend, so I avoided using names altogether.

That night, I went to bed scared I actually might a twin fucker myself.

My mind circled back to my last three girlfriends, and I realized in horror that we all wear the same bra size.

My mind circled back to my last three girlfriends. I realized in horror we all wear the same bra size.

Not only do I go after women with the same boob size as me, but my last three girlfriends have all had the similar shade of chocolate-brown hair.

The next morning, I explained the concept of twin fuckers to a straight friend of mine who thinks all things queer are wildly fascinating (unlike my gay friends who usually yawn and roll their eyes when I try to break down the obscurities I observe within our community).

As expected, she was intrigued, giving me all the undivided attention I crave. (I love straight people; they make me feel so exotic.)

"Does this mean I'm a narcissist?" I asked, my voice weak and trembling. I've secretly feared I might be a narcissist for many years.

There was a long, pregnant pause. "I don't know. Maybe."

Shit! This was not looking good.

I discovered her through my favorite podcast "The Mental Illness Happy Hour," which probably gives you some insight into my constant obsession with disease and mental health.

"Most LGBTQ people have a type (or types) that they are attracted to. Who we are attracted is innate and comes from an intricate set of circumstances that include physiological, sociological, historical and psychological components," Dr. Costine explains.

So is narcissism totally out of the window? Not necessarily. Dr. Costine explains that generalizing twin fuckers as narcissists is a "complicated situation."

"It does not mean that there is no narcissism — many people in our community suffer from narcissist traits due to our collective trauma (which can be helped by healing the trauma). But looking alike is not a sign of narcissism per se – more a sign of all the things I just discussed," Dr. Costine says.

Looking alike is not a sign of narcissism per se.

So, I still could be a narcissist because I'm definitely a traumatized gay (what gay isn't?), but going after girls with the same boob size as me is probably not direct evidence that I'm a narcissist.

My best friend Owen is also sort of a twin fucker like me. He goes after burly, unshaven cubs like himself.

I tried so desperately to believe him. Maybe I keep my hair chocolate brown because I find dark hair to be sexy, and I want to fit my own definition of attraction?

I couldn't help but think Owen's quick denial could possibly be rooted in his own deflection of his own narcissistic tendencies.

Maybe we're safe. Maybe we're just both two good people trying to find a soul that we can goddamn connect with, and our tendency to twin fuck is direct evidence of precisely that.

But what about couples, like my friend Natalie and her girlfriend, who so closely resemble each other that their voices sound the same?

Every gay person knows about those couples. They're in league of their own. They're the couples who are so alike, they sound exactly the same, they dress exactly the same and essentially morph into the same person.

Dr. Costine explains that this is more about losing your own identity when you're in the throes of the "infatuation phase" of a relationship.

"When couples start looking and sounding alike, it might possibly be a sign of merging to the point of losing their sense of self, but not necessarily. It really depends on the individual's sense of self going into the relationship," Dr. Costine says.

She talks about the "urge to merge" in "Lesbian Love Addiction," which explains that during the infatuation phase, the couple "basically melts into one being."

However, Dr. Costine says it isn't healthy to morph into one being, as so many of us gays are inclined to do. I mean, what lesbian hasn't found her identity blurred when she's in love (at least once)?

"This is not a sign of a healthy connection, despite the fact that it feels amazing during the honeymoon period and is part of the bonding phase. Unfortunately, merging can be quite destructive to the couple if not dealt with as soon as possible," Dr. Costine says.

I felt a shudder go up my spine. After all, as I type this, I'm wearing my girlfriend's goddamn jeans.

Luckily, Dr. Costine says we are not totally screwed.

"It is very healable, thankfully, and with the help of a qualified therapist or community resources, an LGBTQ person can stop unconsciously merging with new partners or the couple can learn how to un-merge in a healthy way."

Dr. Costine's expert advice made me realize that narcissism is probably not the problem, but lesbo love addiction probably is!

Luckily, there is nothing a little bit of good old fashioned therapy can't fix. Right? Right...?