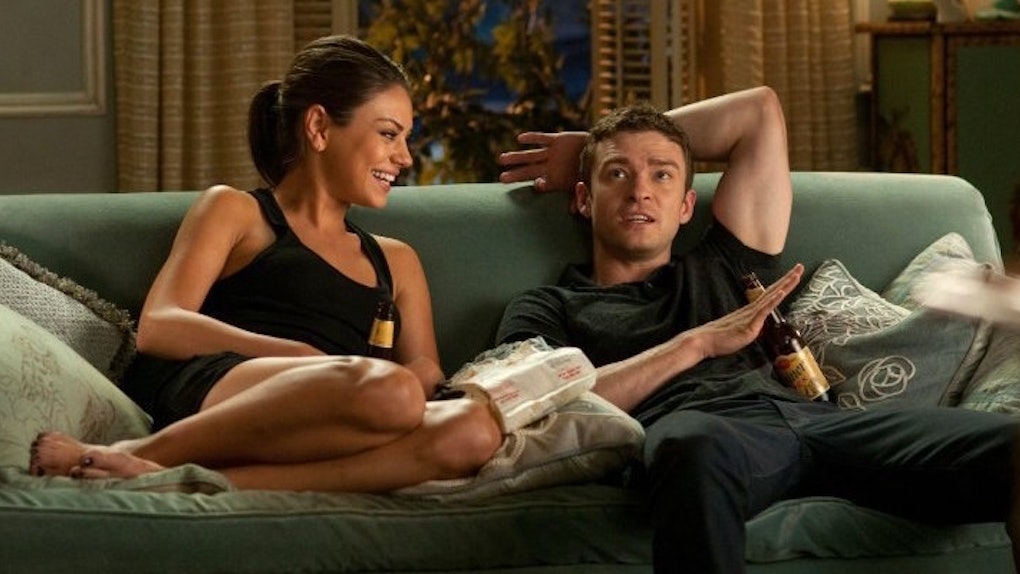 Couples who stay in are commonly perceived as boring, lazy and antisocial.

In reality, this couldn't be further from the truth. We're actually a great time, we just prefer to 1) not spend money on senseless entrance fees, overpriced drinks and microwaved entrees, 2) enjoy the company of our partners in an intimate setting and 3) sit on plush couches with ample pillows rather than stiff bar stools.

I mean, we'll make it out for the big events: birthdays, anniversaries and all that good stuff. But other than that, you can come hang out at our place because we aren't going ANYWHERE.

Below, see the 10 uniting qualities of every couple who prefers to stay in:

When my fiancée and I discovered Sriracha-flavored popcorn was an actual, edible thing, it was as if we'd both spotted Beyoncé in the middle of the grocery store aisle.

We looked at each other with blank, astounded stares, and without saying a word, we each immediately grabbed a bag and plopped them into our cart.

A night in without food is like Kanye West without self-righteousness: boring. I mean, what's the point of staying in unless you can devour a ridiculous amount of food, without judgment, in the privacy of your own home?

A night in without food is like Kanye West without self-righteousness: boring.

Every time my fiancée calls for pizza, she asks for no cheese. (She's vegan.) Just by saying that, the person on the other end of the phone, whose name is Carlos and whose English is very broken, will ask in the most charming way, “Sarah, is that you?” and repeat our standard, bi-weekly order back to us without us having to say a single word.

He knows the correct amount of dipping sauces we need and that we like our crust crunchy; he just knows everything. That's why you opt for independently-owned pizza places, people! Not chains.

3. It takes longer to find a movie/series than to actually stream it.

Actually settling on a movie or series is a complicated, enduring process because you're confronted with so many options every time. Even when you do finally find something you both agree on, you can get 10 minutes into the film and mutually agree it's not for either of you.

My own movie-selection duties have been revoked because I'm particularly bad at this. As such, my fiancée has since taken over, though her own taste is questionable at times — the last movie we watched together was “Grown Ups 2."

It's basically the be-all and end-all of your nights in. When new content is added, you're visibly excited. Not jump-up-and-down excited, but, like, sufficiently pleased.

I'll have barely made it off the welcome mat, and my pants will be on the floor. The same goes for my fiancée. She'll have washed her face clean of makeup and thrown her presentable hair into a messy bun, lazily tied atop her head.

This is our at-home uniform, not suitable for public consumption — just each other.

6. You probably have a designated TV show each night of the week.

While every night of the week might be a stretch, you probably know which TV shows will be coming on that evening so you and your partner can watch it together.

If you're a fan of "Big Brother," you're an absolute pro at staying in since that show comes on three nights a week, which is one hell of an investment for a single show.

7. When you do go out, you have to post a picture, so people don't think you're a recluse.

I mean, we have to keep up appearances. While our inherent reaction to the outdoors is akin to a vampire in sunlight, we need to prove every now and then that we do make it out, and we do have social lives.

Plus, it's nice to have photos of yourselves actually dressed up, isn't it?

In our recently-purchased home, our living room has three blankets and six pillows. We've essentially turned our primary living space into a glorified bedroom.

We also have enough wine and craft beer to get a house party completely wasted, but instead, we save these libations for ourselves.

9. You can't start your movie until the food and alcohol have been presented.

I don't know why this is, but watching a movie or show without food almost seems redundant. In reality, the movie truly starts when the pizza's been delivered, and the wine has been poured in ridiculously liberal portions.

In reality, the movie truly starts when the pizza's been delivered.

10. There's always one person in every couple who will be asleep before the credits roll.

This person is ALWAYS my fiancée. She's a baker and wakes up at 4 am, so she's absolutely within her right to fall asleep after her first glass of wine, before we've been introduced to the film's plot.