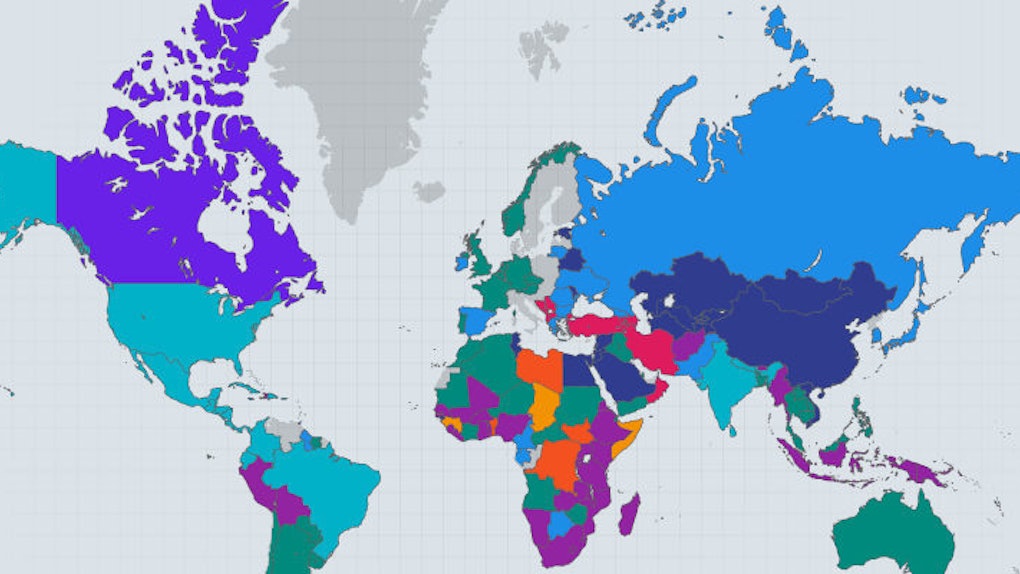 These Are The Most Popular Contraceptive Methods Around The World

A team over at Superdrug Online Doctor has analyzed the results of a UN report surveying married or attached women about their contraceptive use to create this study about birth control trends around the world.

Check out this handy color-coded map they put together for us here:

Right there in front of us in beautiful bright colors, we have the most popular birth control methods used by every country in the WHOLE WIDE WORLD. Pretty cool if you ask me.

So let's talk about some of these trends.

What about your friends who are super hyped-up on their IUDs? Tell them they'd fit in just right in Asia where those seem to be the most popular method of birth control.

But what about people like me, who are still popping the pill? Don't worry guys, our method of birth control is still popular in plenty of places across the globe, from several countries in Africa to Australia to Western Europe and even parts of South America.

What about the less effective methods of birth control? What countries are still using those? Luckily, the numbers of countries using these ineffective and cost-free methods has gone down in the past 20 or so years, but that isn't to say that some countries aren't still utilizing them.

Africa is the only continent with countries still relying on the rhythm method as their primary form of birth control. And you can tell the next guy who insists on skipping out on the condom and just pulling out that he should move to Southern Europe, Western Asia or Southern Asia, where that method is still the most popular among couples.

In any case, the study is ultimately cause to celebrate as it found that contraceptive use has gone up by 8.3 percent worldwide since 1994. Go team!