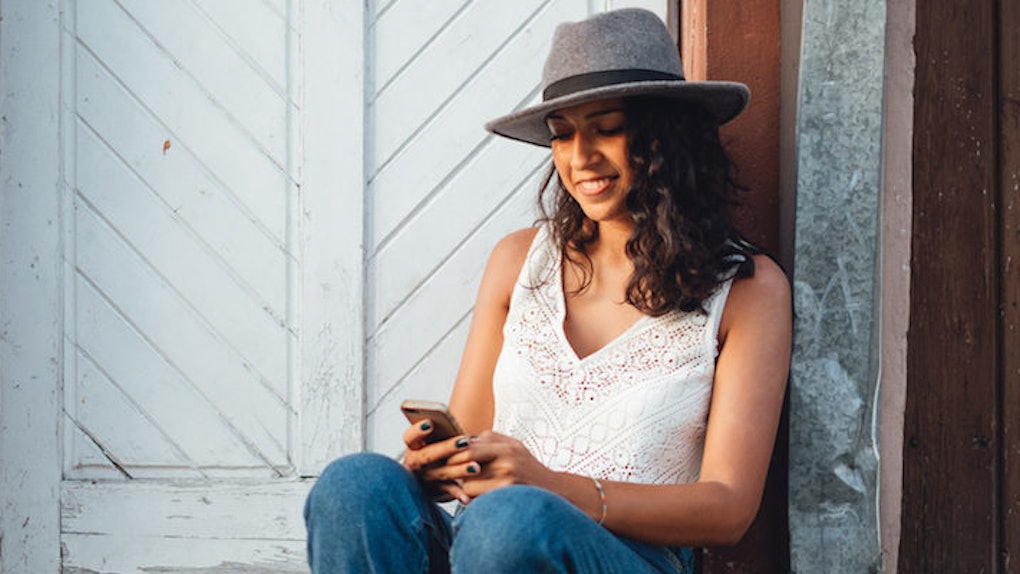 Brides Share How To Meet Your Future Husband On Tinder

When people roll their eyes and talk badly about dating apps, the first one they toss out to go off on a rant about is Tinder. Most people know it as a home for one-night stands and trashy messages that lead to inappropriate pics that make you want to swear off dating for the rest of your life.

But believe it or not, people — real people — have met the loves of their lives on Tinder, which may give you some hope or the urge to give that app or any other dating app a second, third or 15th chance.

Before you do, take note of how these six brides met "the one" on Tinder:

I was on Tinder for about a year before I met my fiancé on there. I swiped left maybe close to 1,000 times. There were only a handful of guys I chatted with on there and met in person for a date, but most of the time, it didn't go very well. One guy disappeared halfway through our first date. Another guy talked about his ex-girlfriend the whole time. I was in shock when I went on a first date with my husband and he was normal. It was like hitting the Tinder jackpot.

I downloaded like five other dating apps and had used those for a couple of years. Everyone laughed that Tinder was not a place to meet anyone serious. But the other apps weren't getting me anywhere. Within two weeks on Tinder, I met my now-fiancé. I don't think I got lucky. I just think I was open to giving all the apps a fair chance.

All the dating apps were my way of having a fun time on a Tuesday night while watching TV. I didn't think I'd actually meet anyone on Tinder. But, my friends and I would just send guys funny messages and spend hours swiping. It was kind of a game to us. One of my friends swiped right on a guy and then we sent him knock, knock joke messages. He played along, and then he asked me out. We've been dating for about a year and a half and are getting married in 2017.

4. He sent me the only serious message.

Most of the messages I got were disgusting. There were a couple I reported because they were offensive and gross. Seriously, all a guy needs to do to get a girl to go out with him on one of the apps is just send a thoughtful, non-creepy message. My fiancé sent me a normal message commenting on the college I went to. That's how I knew he was worthy of a first date, and we've been on hundreds of dates since.

5. We skipped the back-and-forth.

I was so against messaging back and forth with guys on there. Everyone just wants to talk, talk, talk, and no one wants to meet in person. When my future husband messaged me on there, I said let's skip the small talk and meet for coffee. It was better that way. We got to know each other in person. I was able to tell instantly if he was someone I wanted to get to know more. Online, a lot of people seem perfect. And then, you meet them in person and you're like, 'What was I thinking?'

6. It started off casual.

It's a little embarrassing to admit, but I used Tinder only for hookups. Whatever, judge me if you want. But, like, that's where I was at in my life. Basically, one guy I met off there, who I saw in a casual, hook-up kind of way, turned out to be my soulmate. We fell in love. I deleted the app, and now we're engaged after two years of dating exclusively.

Feeling inspired to clutter your phone with dating apps again? You never know what will happen. Either you'll meet your fair share of weirdos, or you'll meet your Prince Charming and fall madly in love with him.

Either way, you'll probably need to swipe left a lot before you find your Mr. Right.