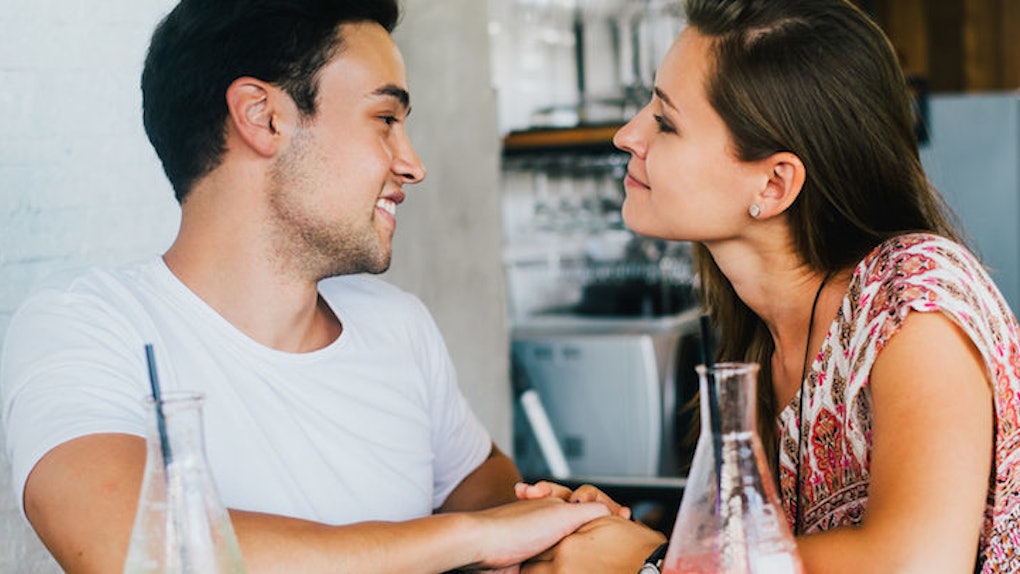 13 Qualities That Make Him Not Just Your Boyfriend, But Your Best Friend

Just because the two of you hang out together, like, all the time doesn't make your boyfriend your best friend. Being a boyfriend is a surface-level quality.

You go to meals together, you stay in and watch movies, you caress each other's face and hump a little bit. It's all very obvious.

Being a best friend, however, involves a lot more understanding and acceptance. It goes deeper than holding hands or showing up to places together.

It's knowing who that person is and loving him because he makes you better. It's palling around because you feel more whole in his presence.

There are some qualities and experiences, beyond the duties of a boyfriend that make him your best friend.

1. He's the first person you send your goofy selfie to

Whether it's an interesting article or an “I'm bored” Snapchat, your boyfriend is the first person on the receiving list. Even when you feel like you're totally harassing him with silly Internet findings, he always wants to be bothered by you.

There's never not a time he doesn't want to hear from you -- no matter how ridiculous your Look-I'm-Eating-A-Sandwich! selfie is.

2. You can sit around all day in your pajamas, sans makeup and tamed hair, and feel totally comfortable

Even when you're not looking or feeling your best, you know your boyfriend will never judge you based on your appearance.

You don't have to dress up for him or feel like you have to always be “on.” He's happy to see you comfortable, in your natural state and just being yourself.

3. It's not awkward when you split the bill or eat off each other's plates

You two are so close that it doesn't matter who pays for what -- what's his is yours and what's yours is his. Same goes for the food on each other's plates or the hat on his head or the t-shirts to sleep in.

You always put on his clothes and don't tell him that you're borrowing them. You don't keep tabs on each other.

4. He loves hearing the trivial play-by-plays of your day

As long as it's coming from you, it's riveting.

“My work friend gave me wine for Christmas and then I walked down 21st Street. I stopped and bought a magnet.”

“Wow, babe. You are inspiring. I don't know how you manage to do it all.”

5. You have endless amounts of inside jokes

The two of you practically speak your own language. You tease each other with playful nicknames derived from your months of experiences together.

Sometimes it feels like it's just you and your boyfriend existing in a shared bubble.

6. You two stay up talking for hours

It's not unlike the fun and silly slumber parties you had as a kid. You keep each other up chatting about everything from conspiracy theories, to gossip, to life advice.

It doesn't matter if you have work in the morning, being tired is absolutely worth spending time talking between pillows.

7. You have fights and immediately get over them

It's hard to stay mad over his being 15 minutes late when he arrives with flowers. Whatever you're arguing over, it doesn't mean anything compared to how much you love each other.

When you put it into perspective, the two of you realize it's not productive to argue anymore.

8. You love each other more during those times when you're being ridiculous together

Sign-hand-dancing in the car to a cheesy Taylor Swift song, getting drunk off rosé and imitating the "Housewives," dancing purposely goofy to a commercial jingle, texting a million times in a row just because you can -- those silly moments are the ones that bring out the best in you and your boyfriend.

You feel so lucky to have found someone who appreciates your version of The Sprinkler.

9. The gross things you do don't matter

You'll wear the same sweatpants all weekend and he won't even notice. You won't wash your hair even while showering together.

Having full conversations through the bathroom door is completely normal. He's your best friend. There's almost nothing that's off limits.

10. He'll commiserate with you on your period

“I am having the worst cramps right now. Sorry for being a bitch, my period has made me a blood-shedding monster.”

Not even a flinch.

11. You can tell him anything without fear

You know he won't judge or jump to conclusions or use it against you in the future.

The difference between being just a boyfriend and being a best friend in addition means being able to turn to each other with the tough, embarrassing, scary, smelly, unbelievable stuff.

12. Pulling pranks on each other is always playful

You never take it personally when he scares you as you're holding hot tea because you know you'll make it up to him by misplacing his computer charger in the litter box.

You share the same sense of humor and are on the same page when it comes to having fun. It definitely makes family dinners more interesting.

We all have heated, tense moments when we're not thinking clearly and mentally spiraling down a mind-hole.

He cares enough not to let you get the best of yourself and he isn't afraid to intervene when your thoughts can't be trusted. He has your best interests in mind and therefore knows how to soothe you.