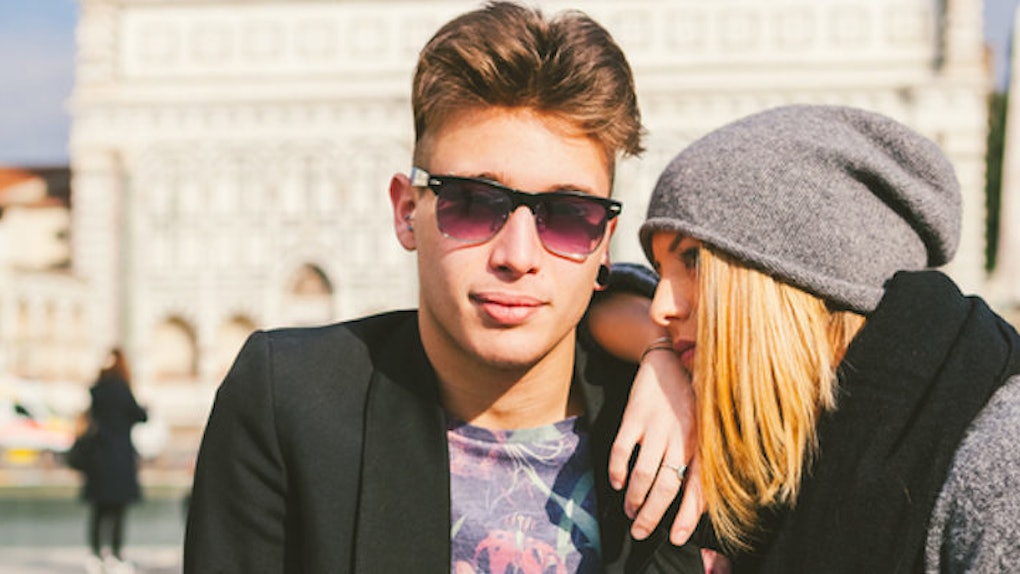 What Happens When You Catch Feelings And Bottle Up Your Emotions

In this day and age, it has become taboo to develop feelings for someone. It’s why we deliberately wait X number of minutes to respond to a text from the guy we like, or we pretend like we don’t see him from across the room at a party.

It’s why guys follow bullsh*t rules, like waiting three days before calling a girl after a successful date, or acting cool and aloof when she walks by while he's with his friends.

It’s a crime to care. And for good reason. Feelings f*ck you up; caring hurts.

I was hurt badly before, and even though I no longer felt the pain, the memory of it still terrified me. So when I met Justin*, I naturally had my guard up.

He was a player, and I knew it. But when I met him for the first time, it was as if every nerve ending in my entire body had been ignited. It was electric. I never wanted anyone more than I wanted him.

But, I wasn’t about to fall for someone who would never care about me, not again. So, I put my guard up. I decided I would just use him like he was going to use me. I’d be okay with it.

We continued to use each other for months, and I kept playing it cool and carefree. But my head started spinning. I pretended like it wasn’t, and he believed me.

He thought I was a stone-cold player. Yet, I was slowly losing control.

I thought about him all the time. Whenever I would bootycall him, it wasn't just out of physical desire; it was out of an inexplicable need to be close to him, despite the nature of our relationship.

But it didn’t feel like love, or even “really like.” It was a confusing tangled mess of malformed emotions. They were feelings that were never allowed to properly develop, since I made a conscious decision to shove them deep into my subconscious.

Justin, as a grade-A assh*le, would do a lot of things that upset me. But instead of feeling sad, like I would have in the past and should have naturally, I just felt frustrated and anguished. I felt like I was going to explode.

I wanted to let it out. I wanted to get it out of my system. I wanted to cry hysterically and therapeutically, in order to relieve the crushing pressure of all the confusing, painful, helpless emotions I felt.

No matter how hard I tried, and no matter how much I wanted to, I couldn’t make myself cry over him. Instead, I would find myself sobbing over things that didn’t make sense, like sweet messages from a guy I didn’t care for, but who really respected and appreciated me in a way Justin didn’t and never would.

Every time a text came in, it was like a trigger. I felt out of control.

Justin also began to behave strangely. He was hot and cold on an unpredictable basis.

For instance, when he was drunk, he told me he loved me. Then, he denied it weeks later. On another intoxicated occasion, he tried to open up to me, but kept interjecting:

I don’t even know why I’m telling you this. You don’t give a f*ck.

When he said those words, I felt a shock through my system. I wished I had let my feelings have a chance to properly mature. I worried he believe I didn’t have feelings for him.

Ironically, it was just the opposite of my initial fear. I wondered what would happen if he knew I did. I felt like it was way too late to even tell him.

The biggest (and painfully obvious) lesson I learned? The problem with acting like you don’t care is people will think you don’t care.

When I finally found the strength to end it with Justin, after he upset me one too many times, I explained the anguish I felt. It became clear he thought just that: I never cared.

I didn’t want to be honest with him from the start because, knowing his fear of commitment, I didn’t want to lose him. It seemed worth it to have a hookup over nothing at all.

I wish I had been honest from the beginning, or at least from the moment I started feeling things for him. There’s nothing wrong with developing feelings for someone you spend that kind of emotional and physical time with. It’s actually very natural, even if unwanted.

What may start as a hookup may become difficult for one or both parties involved, even if that was never his or her intention. You can’t control how you feel, no matter how hard you try.

If that happens, it’s important to be honest. It’s essential to evolve or die. It won't be worth it to carry out a meaningless relationship with someone who actually means something to you. It will never be enough.

It’s better to know sooner if you’re on the same page or not. That way, you'll be able to move on and get out.

You don’t want to be left in the wreck I am. I'm a confused girl whose feelings and pride got so tangled and morphed inside of her. And even months after I called it quits with Justin, I still can’t unravel my nonsensical, underdeveloped, unavoidable feelings for him.

Excuse the lame metaphor, but if my feelings for Justin were a plant, I sprayed some weird chemicals on it that didn’t allow it to grow (and die) correctly or naturally.

If he had known, maybe this would have taken another course.

If he had known, maybe it would have ended sooner, and my feelings and pain could have healed in the way they were supposed to.

Instead, I’ve got this warped disease.

Now, when I worry about texting a guy first or hesitate before making a particularly flirtatious comment, I ask myself, "Why does this scare me? Because I don’t want him to think I’m into him?"

So what? I am into him. It’d be silly to try and hide that.