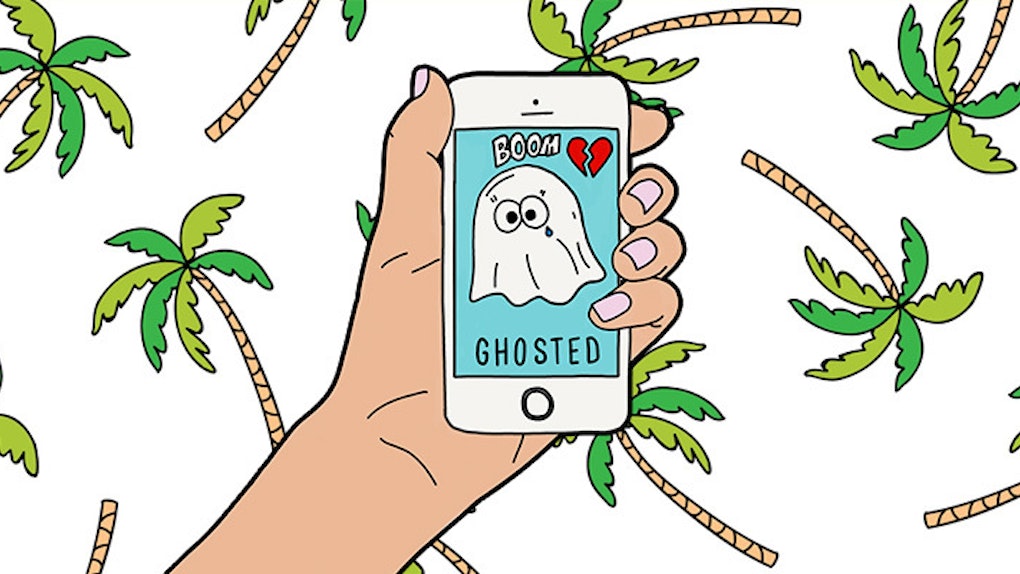 This week we have Maggie*, who was ghosted by the guy she was dating after they went on vacation together. Don't believe me? Take her word for it:

I'm an American living in a Spanish-speaking country. I decided to join a CrossFit gym. There was an Australian guy in the class (he doesn't speak any Spanish, but I do), so we started chatting and then hanging out outside of CrossFit and texting all the time. At one point, he asked me what I was doing for a long weekend. I told him I was planning a trip to another part of the country and jokingly suggested that he should see if there were any bus tickets left. He very quickly purchased tickets, and that weekend was the first time we hooked up. We went on several dates, hung out and hooked up a lot during the next few weeks. During that time, he decided to buy plane tickets to accompany me on another long weekend trip I had planned. I thought the trip went really well. We booked a room at a cute bed and breakfast, and decided what tours we wanted to do together. From the beginning, he'd been clear about not wanting a serious relationship, but he was always super caring and affectionate (read: not afraid of PDA). Other than a small tiff when I called him out for posting a photo to Instagram with #solotravel, we got along really well. I had never traveled with a guy I was dating before, so I was surprised by how smoothly things went. But a couple of days after we got back, he missed CrossFit and didn't respond when I texted him about it. He had previously been a very, very enthusiastic texter, so right away I felt that something was off. He didn't respond until I sent a third follow-up text over the weekend. He said that "we should chat" but never followed up.

Does it really count as ghosting if I still see him at CrossFit? We don't speak, and we still haven't had that "chat."

To answer Maggie's final question there: Yes. I think it definitely still counts as ghosting even if you see each other all the time.

In fact, I would say that makes it even worse. The one (maybe) nice thing about ghosting is that you at least don't have to see the person all the time, so maybe you can have a shot of forgetting them.

But, UGH, seeing him at the gym on the reg would just be a constant reminder of the way he broke your heart. Sounds horrible.

I also just don't really understand why he ghosted her in the first place after he seemed SO into it (like, um, I don't know, tagging-along-on-her-vacation-level into it).

Do you get where he was coming from? If you do, FILL ME IN. Or maybe you've had a similar experience? In that case, send it my way!

As always, if you have your own submission for “Boom, Ghosted,” please feel free to send it over to me at boomghosted@elitedaily.com.