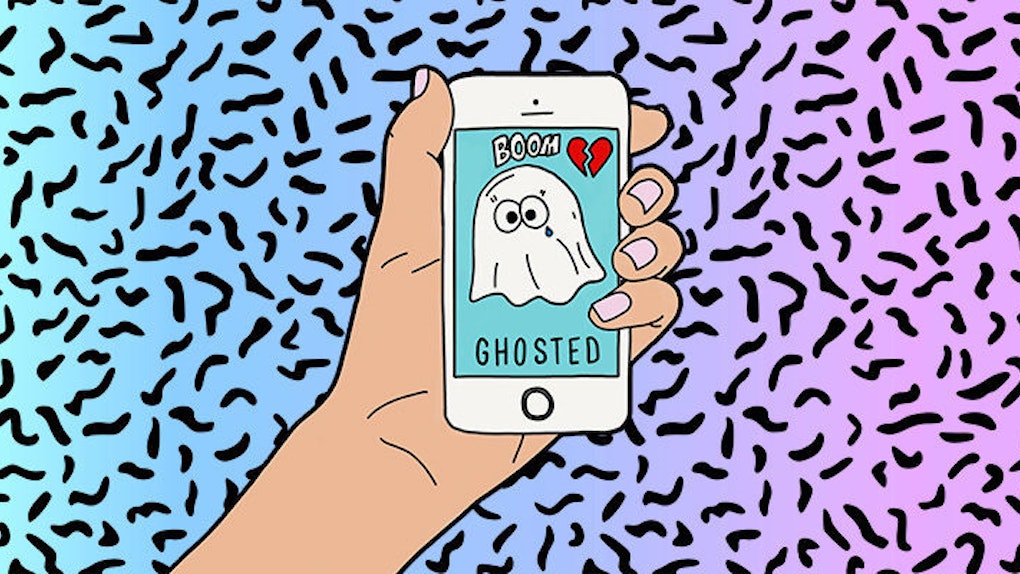 This week, we have Claudia* who was ghosted by the guy who went out of his way to reassure her that he would be there for her no matter what.

Read the story from her point of view here:

I was ghosted by the guy who told me he wouldn't be like the guys in my past. He told me that no matter what, he would be there for me, even if we didn't work out. For the past three years of college, I was only interested in hooking up in casual relationships, and it was great for a while. That's how we started, but then I caught feelings. For the first time, I opened up about my past relationships, and I even thought about what it would be like if he was my boyfriend. Out of courtesy, I told him that things had changed, and that I was no longer looking for casual sex. I completely expected him to say he wasn't interested in being in a relationship... but instead he hit me with the "I'm not ready," "I've been single for awhile, so I don't want to mess this up," crap. He told me even though he wasn't ready for a relationship, he was still interested in seeing me and working towards a relationship (whatever that means). He even said he was OK with not having sex with me anymore; he claimed he wanted to be in my life. We would text from the time we woke up until pretty late at night. After a couple weeks, though, his "good morning beautiful" texts stopped. It went from talking all day to a couple times a day. I asked if everything was OK, and he told me that he just been working a lot and was hoping to get a promotion (which I completely supported; we both wanted to move to Seattle, BTW, and that's what set him apart on OkCupid.) I found myself confused and wondering where things went wrong. He used to compliment me all the time and text me all the time. He met my mom. We would talk about our hopes and goals for the future, we both tried things in bed that we had never done before, we opened up to each other in a way we had never done before... and yet, just as quickly as he had come into my life, he left. One night, after a really rough day at work, I went to hang out with him at his mom's, we ate pizza and hooked up until 2 am. Then, he told me he had to pick his nephew up before he drove home. Who picks their nephew up at 2 am? Annoyed, I stormed to my car and drove home in the pouring rain. It was my first time at his mom's, and I ended up getting lost. My phone died, so I couldn't call him to ask for help. It should've just taken me 30 minutes to drive home, but getting lost in the middle of nowhere left me not getting home until 3 am. I plugged my phone into the charger and texted him, letting him know I made it home safely and that my phone had died. I had broken my phone and couldn't afford a new one, so I was borrowing an old phone from my dad. I had lost all of texts and contacts (I really should have backed them up, #androidproblems). So I resorted to messaging him on Facebook. I received no response [Editor's note: He responded with 'Lmao alright'; the rest of the messages are from her], he deleted me off Snapchat (we had a one-month streak) and that was the end. The guy I thought would be different from all the others turned out to just be another false alarm. Déjà vu, if you will. Read our last conversation for yourself here:

So what do you think of Claudia's story? I always have a problem with people not responding to blatant questions. This time, I would go so far as to say that it's even worse because of the type of question she was asking.

By not answering that question, in particular, he was saying that he doesn't want to continue communication with her. At least, that's my take on it.

What do you guys think? Have you ever been through something like this? Can you understand where he's coming from?

I'd always love to hear what you're thinking! Feel free to share your own ghosting stories with me here.