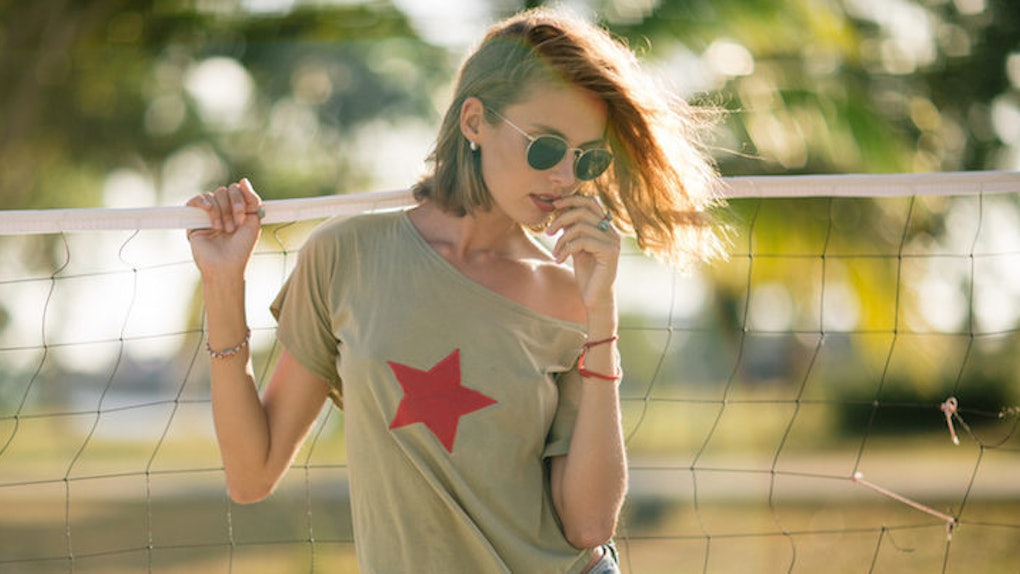 When I was a young kitten in my late teens and very early 20s, I used to have this horrible habit that endlessly wreaked havoc on my love life.

Every time I had a crush, I would bend my personality in order to fit what I assumed the person I was pining for liked and wanted.

I thought, since everyone always wants to date someone he or she has a lot in common with, that this strategy would work to my benefit. But it should come as little to no surprise that my plan in scoring the crush was an epic fail.

People can smell your bullsh*t even if you're an excellent actress, like myself.

Then, somewhere between the throes of 21 and 23, I began to notice a completely different pattern that was becoming blazingly apparent in my life.

"Why, dear, WHY is it that everyone I'm not into is into me, and everyone I'm into isn't into me, like at ALL?!" I would innocently lament to my best friend Abby over drinks in West Hollywood. She was in the same boat. We couldn't figure out why we were so screwed when it came to matters of the heart.

I would even try to push the people who liked me as far away as possible by showing them the worst parts of myself.

If I went on a first date with someone I knew I wasn't romantically interested in, I would do whatever I could to freak her the f*ck out.

I would tell her in great, unabashed detail about my debilitating panic disorder, my incarcerated family members, the pretty blue pills I had to take every day in attempts to quell the black depression, what happened to me when I was 17 and how direly fearful I was of commitment.

In short, I was totally, fully and authentically real. I didn't worry about whether or not I would scare her off by revealing my crazy colors -- in fact, I sort of hoped I would.

But the very people I was the realest with were the people who liked me the most ferociously. And at the same time, the people I tried oh so hard to impress still didn't want a thing to do with little me.

Life has a funny way of not letting you get away with sh*t, huh?

By the time I turned 24, I finally reached the epic epiphany that changed the love game in my world: The realer you are, the hotter you are.

I began to think about all the people I was irrepressibly attracted to. I was attracted to people who were real. Flawed as f*ck. Unapologetically themselves.

So, boys and girls and everyone in between, it's time to take a call of action. Drop the games.

Drop the facades. Drop it all.

Because REAL is the sexiest thing you can be.

Because relaxation is sexy.

Gay or straight. Girl or boy. We’re all magnetically drawn to people who are relaxed.

When you're relaxed, you ooze a quiet confidence that is so bitingly sexy; it makes people in your orbit want to disrobe the moment they lay their keen eyes upon you.

In fact, the pop-culture term “swagger” is really just a word for “relaxed.” Think of all the swagger prototypes -- they're always the guys and girls who dare to lean back in their chair and take it all in. They're the opposite of self-conscious.

Because owning your flaws is sexy.

As I learned in my early 20s, people in fact don't run away in the opposite direction screaming when you reveal your flaws to them.

On the contrary, people are madly drawn to people who are confident enough to own their flaws. It shows confidence. It shows you're real and okay with being real. It makes you relatable. Dynamic. Interesting. Four things that are inherently hot as f*ck.

Because vulnerability is sexy.

The strongest thing a person can do is be vulnerable. To admit they're wrong, clueless, lost, happy, sad or anything that they're feeling in the moment shows they're confident in who they are.

It's blazingly transparent when someone is trying to act "cool" and "tough." It's an instant dry-up. There is nothing that makes us feel more wretched and awkward than a person who is trying to act cool.

When you're real, you're vulnerable. You're letting us in. And isn't sex vulnerable?

Because honesty is sexy.

There is nothing that gets the entirety of my being teeming with relentless sexuality like honesty. The truth is scary, but the truth is also sexy.

When a person is unabashedly honest, you know where you stand. You never have to worry about stupid head games and mind f*cks, which gives you time to focus on the only kind of f*cks you want to f*ck with: SEXUAL F*CKS.

In all seriousness, girls and boys, it's time to embrace all that you are. Not only will it make you a sexier individual, it will make you a happier individual. It's utterly impossible to be happy when you're not being true to yourself.

Falseness feels like a weight you're carrying with you everywhere you go. Release yourself from the heavy shackles and break free into realness.

F*ck doing it to get the girl or guy. Do it for your f*cking self (which always gets the girl or the guy anyway).