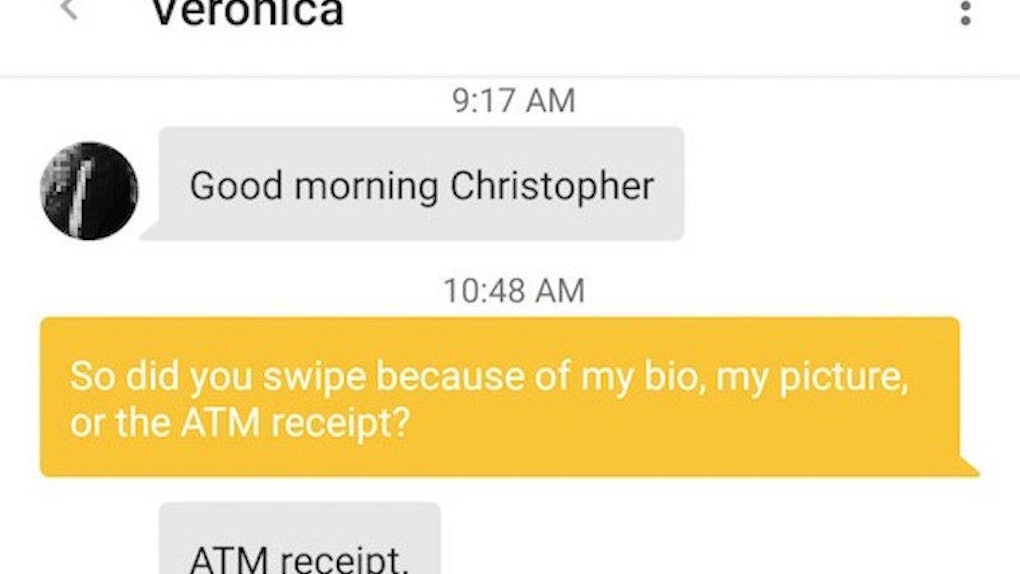 We all know dating is awful. Old song and dance, I know.

The actual process of dating is awful. If anybody tells you otherwise -- that the texting; the dating apps; the anxiety of the first meeting wondering, “F*CK, is she/he going to look ANYTHING like her/his pictures? I've really only seen from the neck up…,” is fun -- they're lying. They. Are. Lying.

The enjoyment of dating only happens when you've widdled the four potential mates down to one. You've placed them on some Kinsey Scale of normalcy. You've both realized you can stand each other enough to start doing things together for more than 40 minutes. The butterflies happen. And, of course, the first time you see each other's bits and pieces is good fun.

The figuring out of who you can actually give your real number to (because, in your head, you're fast-forwarding eight months and wondering if you're inevitably going to have to block this person) is awful and somewhat similar to listening to country music  —  which is the worst.

I recently wrote about how I trolled my Tinder matches with lyrics from Adele's “Hello.” It was fun. You'll like it. I've also written about how sucky Tinder is; how it's basically one giant swimming pool of floating bandaids.

But I'm single. And I don't know or meet a whole lot of people in my day-to-day life. The people I do meet (when I say "meet," I mean gawk at from afar) leave my life quicker than they enter it because I'm too much of a pussy to actually walk up to somebody and say hello.

So I need something else to help me; to aid in my finding of that "nobody's perfect" person. Anybody. Even if it's just someone to hang the f*ck out with and get a beer.

But Tinder is out for me. Forever. Goodbye. THANK YOU. IT'S BEEN LOVELY KNOWING YOU. Ga'bye!

Bumble is in. (Ugh, God. I can't even say that with a straight face.) Bumble is identical to Tinder, except “the woman is in control,” meaning, once matched, the woman has 24 hours to message her match; otherwise, you are unmatched FOREVERRRRRRR.

I feel pathetic just telling my girlfriends I'm either “Bumbling” or have a “Bumble date” because I can't help but think back to "Gladiator" and what Russell Crowe would do in this situation. The Man, The Warrior certainly would not Bumble.

But whatever, I'm here. This girl is in control. Great. I actually prefer that.

I download the app. I create a fake Facebook profile because I don't use Facebook because it's stupid, and I have zero interest in knowing what my seventh grade friend is up to. I upload some choice photos with a short bio -- something that shows off my wit and sense of humor.

This is my original profile:

Simple, right? Funny. Sarcastic. If you can make someone laugh within the first five minutes, you're… something, right? Someone said that.

The picture (which you can't see) is the one found on my Twitter. It's manly, disheveled, unkempt. Unkept? Which is it? Smiling is for the weak and predacious; showing teeth is hostile in the animal kingdom.

I choose my age range (27–33), set the radius, crack my thumbs annnnnnnd I start swiping.

I begin by taking my sweet time scouring profiles because, as my bio says, I'm very picky. But I then realize I can just swipe right like a madman and un-match at a later time. And then I wait. And wait. And wait.

Four days later, this is what I'm rewarded with:

Now, I don't want to sound full of myself, but I like to think of myself as attractive enough to get some attention. I actually think something could be wrong with app, my settings, my location. But I check and, ya, still nothing.

My photos are fine. I don't have bathroom selfies or gym-mirror shots. Maybe that's a strike against me? I don't own any tight A/X t-shirts. What the f*ck, man? This is Bumble. It's supposed to be the “classier” version of Tinder.

Dejected, I delete my Bumble account, sulk and then delete my fake Facebook profile. I wait a day and think about doing something else.

Google “ATM receipt.” If you do, click on the sixth result. Go do it. I'll wait here.

You got something like this, right, minus the censor?

That's a lot of money -- in a checking account, no less. I'm sure you can see where I'm going with this.

I set up a new profile (as well as another fake Facebook page) and use this ATM receipt as my profile picture, keeping my bio and picture selection the same as my original profile.

Before we continue, let's address a couple of things: One, yes, I eat ice cream with a fork and if you're still using a spoon, I don't know you. Just ask Stephanie.

Secondly, I get it, girls: You've traveled to India; apparently, you've also been to Machu Picchu. What is it with women on dating apps at Machu Picchu and the Taj Mahal? Is there some annual trip I don't know about? Is there a “Take Your Selfie For Your Dating App Profile Here →” sign?

The new profile goes live, complete with some random person's old ATM receipt as my photo. I begin conducting the greatest controlled experiment I can think up.

I altered the receipt in two ways, by the way. First, I Photoshopped the date from 2013 to 2015. I figured it was more believable I had a 1-year-old receipt just lying around, rather than a 3-year-old receipt (I'm detail-oriented). Probably didn't matter, but whatever.

The second thing I did was I randomly blocked out a line of text that included the ATM location, which was somewhere in New York. Again, overkill, but the idea was that I was somehow excluding personal information.

Is your mind blown at the level of preciseness? Should I be using my brain for something else, like curing cancer or doing calculus theory? Ya, probably. But STFU.

At around 8 am, I sign on. Using the same age range and mile radius as before, I swipe right on everyone. I don't care who or what (what?) I swipe right on, I'm just trying to get to the front of everyone's queue. Not to mention, since I completely deleted my original account, I'm able to swipe on the same women.

Sometime around 7:30 pm, not even 12 hours later, this is the fruit of my labor:

Now, that's an edited screenshot. The connections scroll horizontally, so it would have been too much to have a 1400x100, left-to-right screenshot. Regardless, you get the idea. And there were more matches. Many more.

Some women, bless their hearts, are honest about why they swiped right.

Two women  —  TWO  —  tell me they didn't even notice the receipt. Call me jaded, bitter, skeptical, whatever, for not believing, but at least they tried.

And one woman, Jill, argues with me about the photo:

I could keep this going, but I've actually become worried about having to re-install this dumb app someday in the future and swiping for real. Someone might remember me as “that douche who put up his ATM receipt.”

There were more “expiring connections,” but to be honest, my experiment proved whatever point it was I thought I was trying to make. And really, I didn't feel like editing 70 jpegs (yes, that many).

But I'll leave you with the best text exchange of the whole thing:

I have to be honest: Cales gets my jibbys in a bunch. I love a good food-hack. We made up afterward, but her match was still compromised by my experiment.

Like that tainted DNA sample from "Making A Murderer," you just gotta throw the whole batch out.